Why I hate "I Hate My Teenage Daughter"

Everything about this new Fox sitcom is stale, nasty and dumb 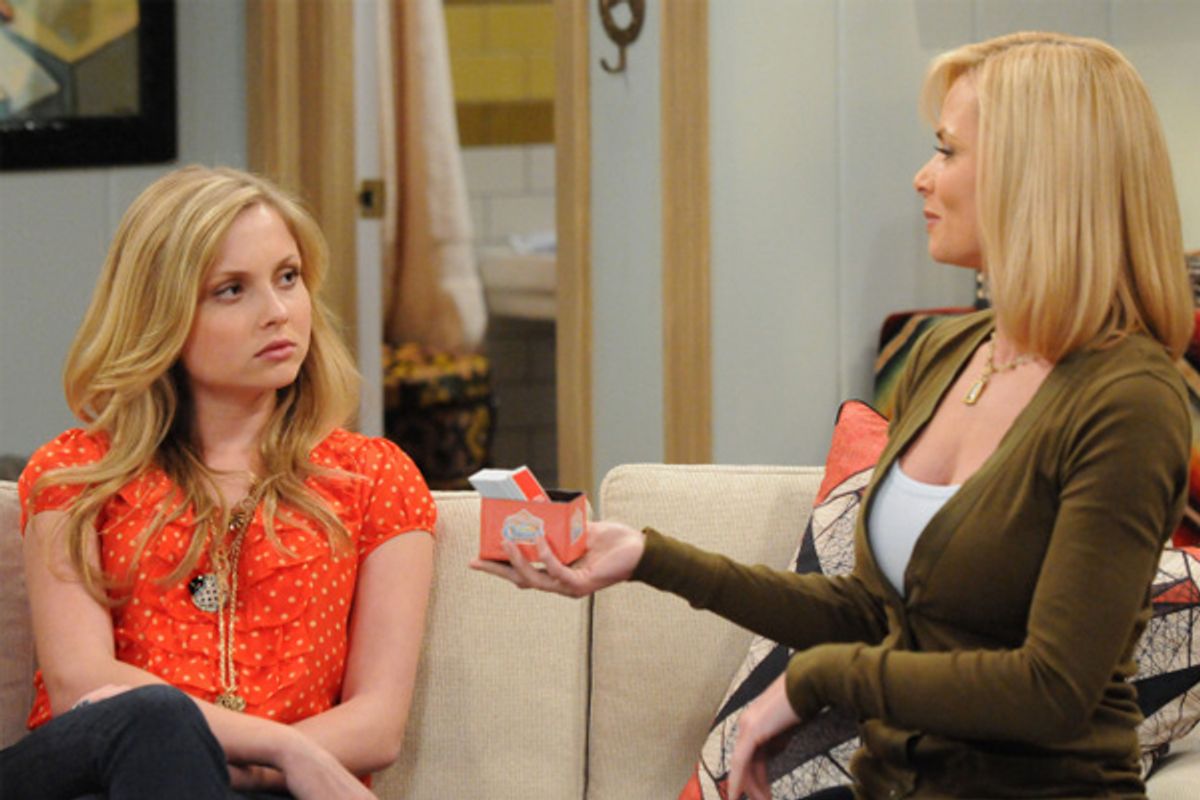 Kristi Lauren and Jamie Pressley in "I Hate My Teenage Daughter"
--

"I Hate My Teenage Daughter" (Wednesdays 9:30 p.m./8:30 Central) feels like the kind of show that would have aired on a broadcast network in about 1981. Filmed before a studio audience on sets lit brightly enough to make innocent suspects confess, it adheres to the old sitcom ratio of 80 percent nasty snark, 10 percent lame social criticism and 10 percent sentimental goo. The goo comes in near the end, so that you leave the show thinking, "Oh yes, these are decent people, I shouldn't be so hard on them," instead of picturing them being eaten by the zombies from "The Walking Dead," which is what I was doing throughout most of the pilot's running time.

"My Name Is Earl" costar Jaime Pressly plays Annie, a divorced mom who has a teenaged daughter named Sophie (Kristi Lauren). Katie Finneran plays her best friend Nikki, who has a teenage daughter named MacKenzie (Aisha Dee). Annie and Nikki were raised in pretty square, sheltered households (Annie's mom was a fundamentalist Christian) and had miserable high school experiences; they've over-corrected by spoiling their own daughters, who are astoundingly self-centered and casually rude and seem to live mostly autonomous lives, notwithstanding the fact that they still live under their parents' roofs. The show's opening salvo is another variation on the "Oh, no, young lady, you're not leaving the house dressed like a slut" gag. When Annie lays down the law with Sophie, the young woman grudgingly returns to her room (after an eye-roll and a gripe); then Nikki's daughter Mackenzie appears in the kitchen and -- are you sitting down, folks? -- she's dressed even more suggestively. Mackenzie: "Where's Sophie?" Annie (turning around and seeing Mackenzie's clothes): "In her room, changing into something a little more ... appropriate..." Mackenzie: "Yeah, my mom made me change, too!"

So Sophie and Mackenzie are junior tramps who take everything for granted, think they know everything, and give their parents a lot of attitude. "I Hate My Teenage Daughter" invites parents of this sort of teen to join Annie and Nikki in a little politically incorrect but much-needed venting over These Damned Kids Today. But wait -- that's not it at all. Turns out Annie isn't a totally clueless doormat; why, just look at how she lays down the law, grounding her daughter for locking a handicapped kid in the school bathroom. And oh, hold on, here's another reversal: Sophie's actually good at heart, and that handicapped kid was a racist who was making fun of MacKenzie, who's half-African-American. And hey, MacKenzie is not such a bad kid, either. Everybody's a clueless dupe or a self-centered monster, except when they're not. And the laugh track loves them all.

If you watched FX's "Louie" this season, you saw actor-writer Louis C.K. skewering precisely this kind of forgettable, schedule-filling sitcom in a flashback. He was starring in yet another variation on the slobbish fat oaf with a gorgeous, saintly wife sitcom. We saw him heaping abuse on his TV wife, who just took it and took it and then finally blurted -- inexplicably and without motivation, as if zapped with an invisible cattle prod -- "I love you." Louie complained to the director that nobody behaved the way these characters were behaving, that there was no dramatic or comic truth to any of it, and that the whole thing felt false. Louie's co-workers just wanted him to shut up and read the lines. The show wasn't art or even clever entertainment, it was just filling airtime and selling ads. "I Hate My Teenage Daughter" falls in the second category. It wastes a very likable cast, including Pressly, who's too lively and eccentric a performer to be playing a dishrag character; Finneran, who gets laughs from lines that flat-out aren't funny; and Chad Coleman, the actor who plays MacKenzie's dad (he was the ex-con boxing coach Cuddy on "The Wire"). There's a potentially rich theme here: what happens when parents try to give their kids the childhood they never had, and it backfires on them. But this isn't the show to explore it.

I Hate My Teenage Daughter Tv