Why no one's talking about Newt's weight 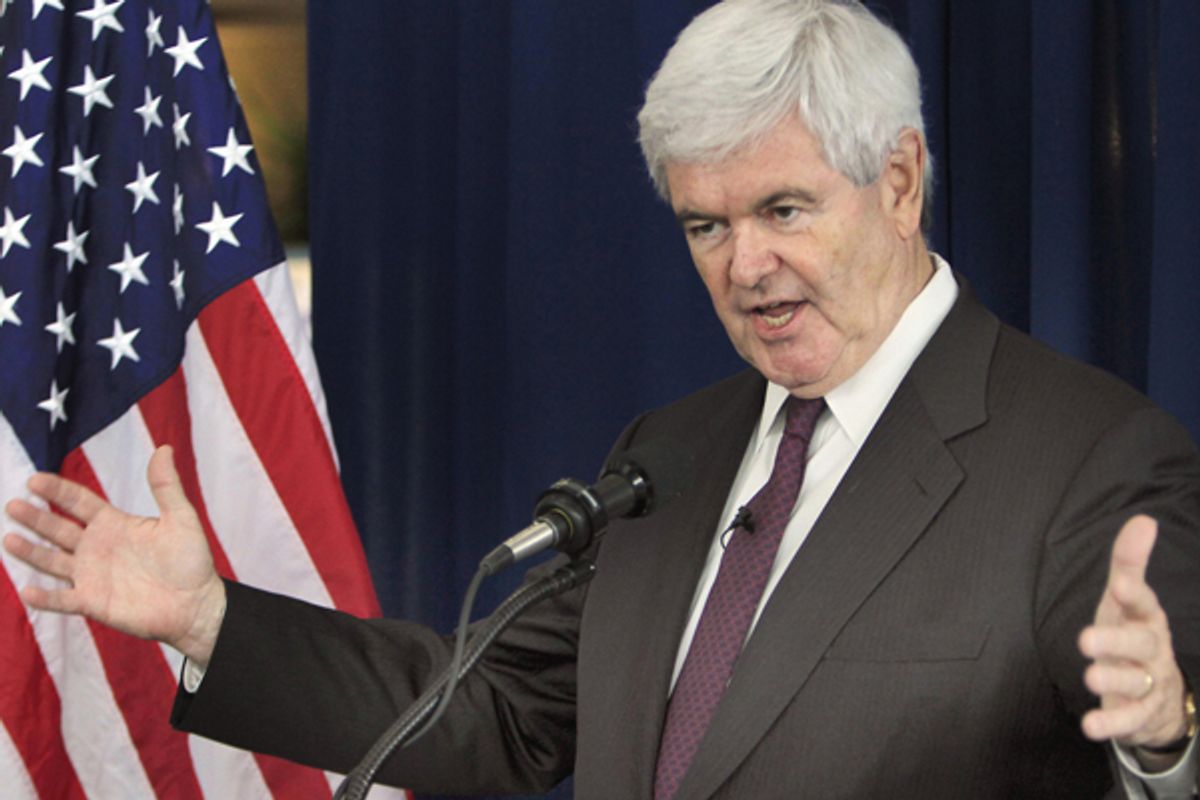 Unlike past presidential primary elections, we are witnessing an almost unprecedentedly volatile nominating process in the Republican Party. Every six weeks, it seems the GOP has a new presidential front-runner. That means every six weeks, we get a new spate of "untold" stories looking harder at that front-runner's candidacy. Last month, with Herman Cain leading the pack, it was buzz about his past sex scandals. Before that, with Mitt Romney ahead, it was a look back at his storied career as a job-killing corporate raider. Before that, when speculations focused on Indiana Gov. Mitch Daniels, we got the scoop on his marriage history.

No doubt, the fast-shifting media scrutiny of flavor-of-the-week candidates reflects the ahistorically fluid nature of the 2012 race -- and it tells us whether today's media is truly equipped to deal with such volatility. Even more important, though, is how the herky-jerky ADD-style coverage also inadvertently provides a rare glimpse into the unspoken cultural biases that frame our national political discourse. Indeed, because the focus of political coverage is shifting on a week-by-week basis, we are getting to see in real time how -- and why -- the media's standards of coverage shift, too.

Christie, you'll recall, is the first-term New Jersey governor who was repeatedly pressured by Republican elders to run for president. Heading into the early fall, polls showed he was leading the GOP field despite refusing to announce a candidacy. During the media scrutiny that followed him, he faced a wave of intense questioning and unduly harsh criticism not about his lack of executive experience nor about his policy positions -- but about his weight. From liberal pundits like the Washington Post's Eugene Robinson to traditional establishment outlets like ABC News Serious Media Voices insisted with a straight face that that the major downside of Christie's potential candidacy was his physical size.

Fast-forward just three months to the present moment in which Gingrich has replaced Christie atop the polls. Overweight for most of his political career, the former speaker has served alongside Rush Limbaugh as the modern era's single most iconic caricature of the Fat White Conservative Man. Indeed, Gingrich's girth has so thoroughly defined his image in the American psyche that he was famously lampooned by none other than "Saturday Night Live's" Chris Farley.

Yet, to date, the front-runner coverage of Gingrich hasn't mentioned his weight problem at all. Somehow, the same media voices who sententiouly insisted that "Christie’s problem with weight ceased being a private matter when he stepped into the public arena" have nothing at all to say about Gingrich's comparable corpulence. Instead, what national media scrutiny he has drawn has been mostly focused on policy and substance.

In terms of voter education, it's certainly good news that Gingrich's record is getting some real (albeit belated) attention. But the difference between how Christie was covered and how Gingrich is covered raises a disturbing question: Why the two standards?

A glib reporter might just say that it's because Christie is fatter than Gingrich -- that, essentially, like obscenity, there's a mysterious "you know it when you see it" standard for Unacceptable Weight that Christie violates but Gingrich somehow doesn't. But this hardly makes sense considering that Gingrich is much more nationally famous for being fat than Christie ever was. (By the way, for those who see Gingrich at a podium and believe he might not actually be overweight, think again; he's able to better hide some of his weight than Christie because it's at the bottom of his torso, but as this recent photo shows, the weight is still very much there.)

Another member of the press corps might then insist that's what the double standard is really all about -- perception of newsiness. Gingrich, goes this argument, has been famous for being fat for so long that his weight is no longer an issue of national importance, while Christie's most certainly is because the governor isn't well known. But, then, just like you can't be half pregnant, obesity either is a serious health issue that voters should consider when selecting their president, or it isn't such an issue -- regardless of whether the obesity is older or newer. Logically (and medically), it's hard to argue it's a serious issue for one candidate (Christie) but not for another candidate (Gingrich) -- and it's even harder to argue that it's somehow less of a health issue for the older of the two men.

Without those two spurious explanations, we are left to behold the media factors that so consistently shape news coverage but are almost never uttered in polite company: cultural biases and social class solidarity.

Though Christie has a long history inside the American establishment as a top corporate lawyer, lobbyist and elite political patron, the national press corps nonetheless saw him as the opposite. Something about his thick New Jersey accent, his middle-class Catholic roots, his blunt regular-guy speaking style, and his geographic base outside the Beltway made him seem all too much the working-class outsider -- all too un-Washington. That's the very archetype that the national press corps despises, disparages and marginalizes.

This is, after all, the press corps whose dean, David Broder, impetuously fumed President Bill Clinton "came in here and he trashed the place -- and it's not his place." It's the same press corps that typically presents "national" news, opinion and analysis as only that which comes exclusively from wealthy journalists, pundits and program guests living in Washington or New York City. And so because the New Jersey governor wasn't perceived to be a creature primarily of that elite culture, class or geography, that press corps implicitly presented his rotundity as physical proof that he was an Overweight Regular Guy Slob not qualified to be president.

Gingrich, by contrast, is the personification of a Washington Insider, a man whose pedigree as a legislator-turned-influence peddler and frequent television bloviator is among the most respected in the nation's capital. Consequently, his Christie-esque weight is not portrayed as a concern because it can't be used to validate any larger cultural criticism  -- or, more precisely, it can't be used to validate any kind of criticism that the Washington press corps is interested in airing. Sure, the former speaker's crony credentials juxtaposed with his obesity make him the flesh-and-blood personification of a Thomas Nast cartoon of a bloated fat cat -- but that kind of anti-elite critique is not permitted inside a national press corps populated by similar cartoon characters.

Not surprisingly, we've seen this very double standard before. When Arkansas Gov. Mike Huckabee ran for president in 2008 as an anti-Washington populist, we were repeatedly reminded of his struggles with weight. Yet, when it came to longtime Washington lobbyist-turned Mississippi Gov. Haley Barbour -- a man who openly describes himself as a "fat redneck" -- the press corps never brought up his weight as a concern when he considered running for president in 2012. The difference was that Huckabee was running against Washington and its aristocratic culture while Barbour so clearly represent that city and that culture.

None of this, of course, is to argue that a presidential candidate's weight should be a monumental issue (as should be obvious from this essay, I personally believe that while policy criticism of Huckabee and Christie's conservative records were more than justified, criticism of their weight was highly offensive). However,  it is to suggest that if an issue is deemed important for one candidate, it should be important -- and equally scrutinized -- for all candidates.

The fact that it isn't -- the fact that such standards are so selectively applied -- tells us a deeper and more disturbing truth about bias in our political news. It tells us that that in many cases, the most powerful kind of media bias is not the much-lambasted, much-publicized partisan slant of Republican-loving Fox News or Democrat-glorifying MSNBC. It is instead most often a stealth cultural, geographic and class bias -- a bias for those who seem to represent the Washington aristocracy and against those who seem to represent the commoner.