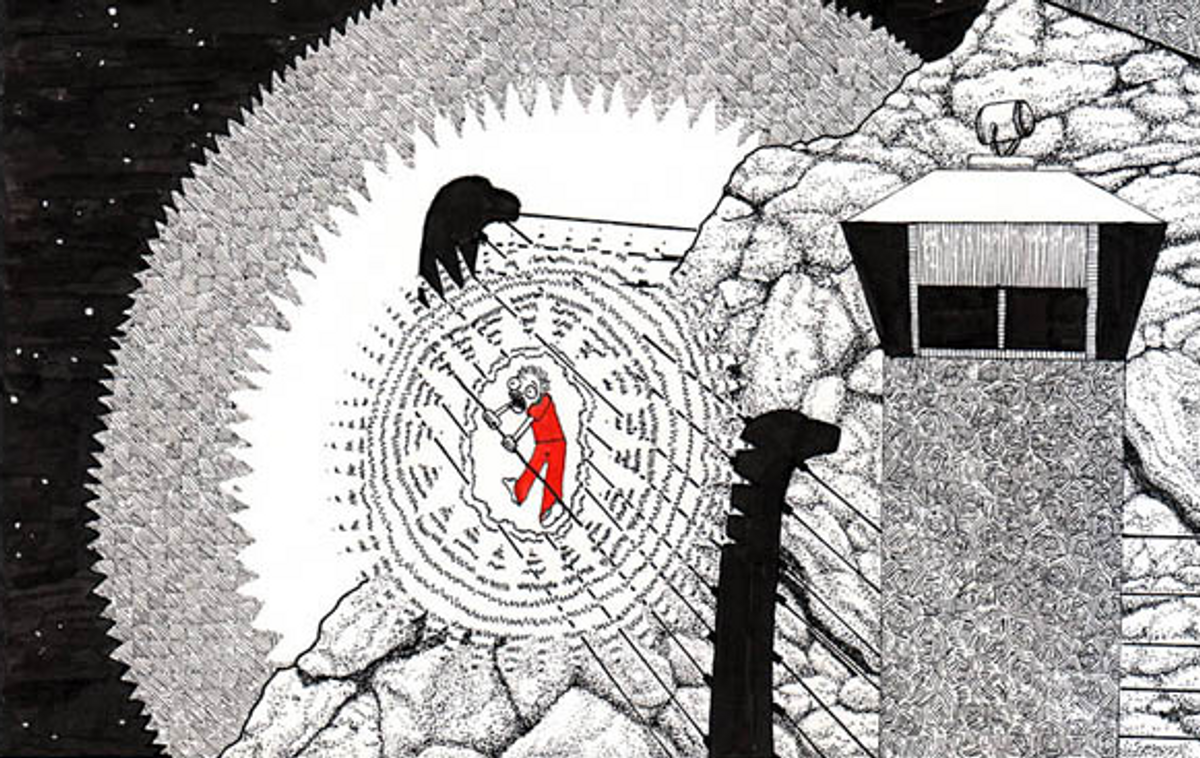 It's end-of-the-year, new-calendar time again. You might be tempted by cats wearing silly hats, or hot girls on the hood of cars, or fast airplanes or cute babies. Or, if you want to try something completely different, you could go with artist Abbey Luck's little twisted gem, "Death on the Mountain," a collection of sad, gruesome and (depending on your sense of humor) often hilarious anecdotes of bizarre tragedies that took place on mountains all over the world. Each sob story is accompanied by (though not always directly related to) Luck's whimsical and graphic watercolor illustrations. Let this be a cautionary tale and have a safe 2012!!

In January 2002, a Siberian tiger attacked a poacher named Qu Shuangxi on a mountain road in China. The tiger broke free from the snare, and though severely injured, waited for Qu to return and ambushed him. Qu survived the attack, but over the next several days the wounded, frightened tiger charged a TV crew and later killed a woman who happened upon the road. The weakened tiger was captured and it died in an animal hospital eight days later. Qu served two years in prison for poaching an endangered species. When released he became a tiger conservationist and worked to clear forests of old snares.

On the night of Feb. 2, 1959, nine Russian skiers died in the Dyatlov Pass Incident. Investigators could only conclude that a "compelling unknown force" had killed them, due to the lack of witnesses. The skiers tore out of their tent, stripped their clothes, and took off barefoot into the snow. Most died of hypothermia. Some had broken bones, fractured skulls, and one woman was even missing her tongue. There were no signs of struggle or wild animals. Sources say their clothing contained high levels of radiation, and many suspect a secret nuclear testing cover up.

On March 23, 1877, influential Mormon leader John Doyle Lee was executed by firing squad at the age of 64 in Utah. He was sentenced to death for his involvement in the Meadow Mountain Massacre. In 1857, a group of Native Americans and Mormon militiamen dressed as Natives killed 120 immigrants from Arkansas, leaving only 17 small children from their party alive. The immigrants were suspected of an absurd cattle-poisoning conspiracy that can only be attributed to wartime hysteria. Lee's role was to offer them Mormon community protection from Indian hostility if they surrendered their weapons, but after the immigrants complied, the militia swooped in and attacked. Lee had 19 wives and 67 children.

On April 10-12, 1815, the largest volcanic eruption in recorded history occurred at Mount Tambora in Indonesia. The explosion could be heard over 1,200 miles away. Over 11,000 people were killed by the eruption, and the death toll climbed to 71,000 due to starvation and disease. Enough ash was projected into the atmosphere to cause a "volcanic winter," and 1815 became known as the "Year Without a Summer." The devastation to agriculture spread to Europe and North America, resulting in the worst famine of the 19th century.

The Bolivian Andes is home to the most dangerous road in the world. North Yungas Road is a winding nightmare of cliffs, curves and abysses. The carcasses of wrecked cars and trucks make it look like a battlefield. This "Road of Death" claims about one life every couple of weeks and up to 200 a year.

In June of 1924, George Herbert Leigh Mallory and Andrew "Sandy" Irvine made the first attempt to climb Mount Everest. It remains unknown whether they actually  reached the top, as they were last seen just a few hundred meters away from the summit. Their bodies  were discovered in 1999, remarkably preserved due to the conditions near the peak.

On July 13, 1967, world-class cyclist Tom Simpson died of exhaustion on the climb of Mont Ventoux in the Tour De France. A brilliant and charismatic man, his death was infamous for the post-mortem discovery of amphetamines and alcohol in his system, a deadly combination in the mid-summer heat. The BBC produced a program called "Death on the Mountain" detailing the highlights of his career.

August 25, 1921, marked the beginning of the Battle of Blair Mountain, a large civil uprising of coal miners in West Virginia. Coal miners and their families suffered severe bullying by coal operator-backed police and strikebreakers for forming unions to improve the dangerous conditions of the mines. Somewhere between 10 and 15 thousand armed coal miners marched upon the better-armed deputies of Logan County, and over the next 8 days over 100 people lost their lives.

On September 5, 2003, the Big Thunder Mountain Railroad roller coaster at Disneyland derailed due to improper maintenance. While entering a tunnel the locomotive at the front of the train became unfastened, went airborne, hit the ceiling of the tunnel, and flipped back on the passenger cars. One person died and 10 others were injured.

On October 13, 1971, a plane with 45 people crashed in the Andes Mountains. There were 16 survivors, the others dying in the crash, from hypothermia, or in an avalanche that killed 8 people. To avoid starvation, the survivors were forced to eat some of the frozen dead passengers until they were rescued two months later.

In November 1846, a group of pioneers called the Donner Party was trapped by early snowfall in the Sierra Nevada. Rescuers were unable to reach them for over four months, and only 48 of the original 87 travelers survived. Their makeshift cabins became engulfed by incessant blizzard. They faced starvation, sickness, frostbite, blindness, insanity, murder, and cannibalism in the most famous and shocking tragedy in American history.

The honor of the world's most dangerous mountain goes to Annapurna, a section of the Himalayas in Nepal. It is so difficult to climb that very few make the attempt. Only 153 summit ascents have been achieved, with 58 deaths on the mountain, a mortality rate of 38 percent. Compare that to Mount Everest which has 4,102 successful summit climbs and a 10% death rate.

You can pick up a copy of the calendar at Etsy, just in time for the holidays.