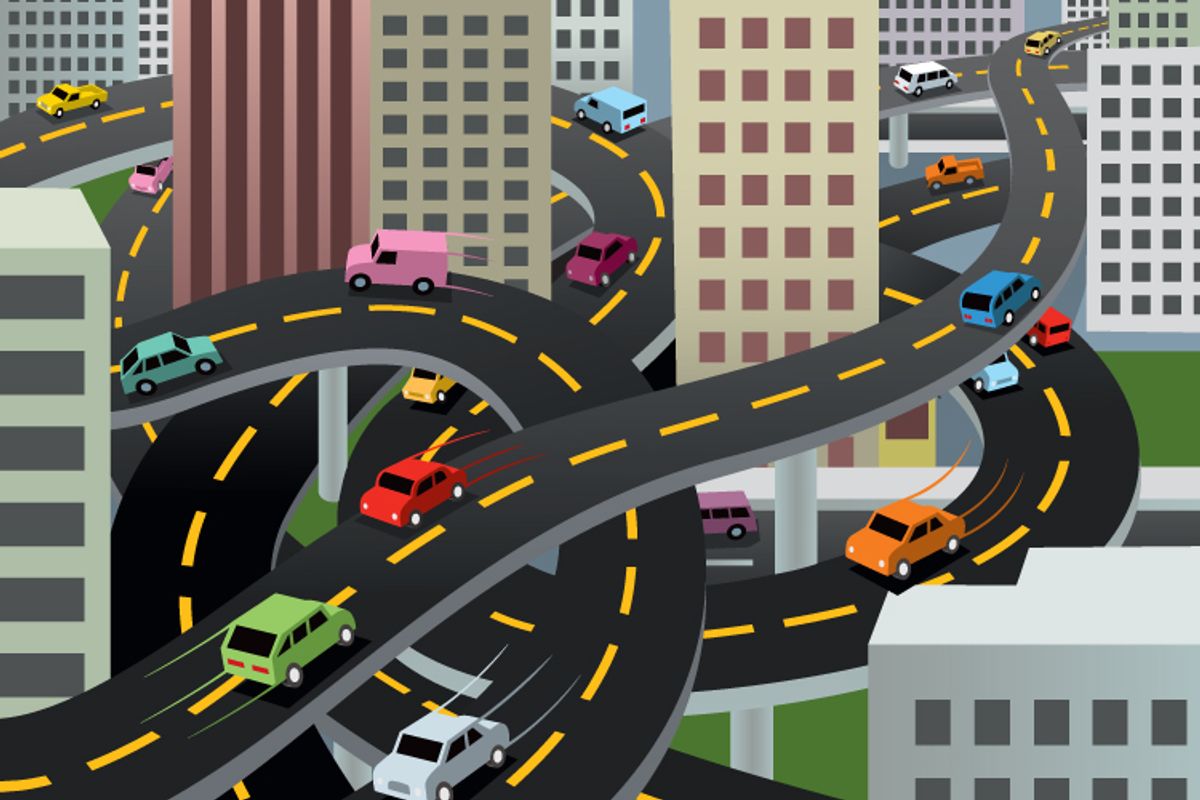 Everyone freak out: Carmageddon is back. Right now, several U.S. cities are scheming to shut down major freeways -- permanently. In the push to take back cities from cars, this is what you'd call throwing down the gauntlet.

The drive to tear down the huge freeways that many blame for the inner-city blight of the '60s and '70s is one of the most dramatic signs of the new urban order. Proponents of such efforts have data to show that freeway removal is not at all bizarre, that we can return to human-size streets without causing a gridlock apocalypse. And that may be true. But pulling down these shrines to the automobile also feels like a bold rewriting of America's 20th-century urban script: Revenge of the Pedestrian. This time it's personal.

Ready or not, decision time is upon us. Many of these highways were built to last between 40 and 50 years -- they'll soon need to be either repaired or reinvented. "What's going to happen in the next 10 years when we need to make a big investment to prevent them from collapsing like the one in Minneapolis?" asks John Renne, professor of urban studies at the University of New Orleans.

For some cities, this means a once-in-a-lifetime opportunity to reclaim a vast amount of downtown land and turn it into the public space of their dreams. A group in St. Louis is agitating for the removal of a one-and-a-half mile stretch of Interstate 70, which would reunite the city center with the Mississippi River and Eero Saarinen's Gateway Arch. Advocates there hope that by opening the city's "front door," as they call it, for the first time since 1964, they'll set the stage for a renaissance of St. Louis' depopulated downtown. Trenton, N.J., has a similar goal, and is looking at converting the four-lane highway that runs along the Delaware River into a vibrant waterfront of parks and buildings. And as New Orleans implements a new master plan for the city following Hurricane Katrina, anything seems possible -- including a pitch to tear down the Claiborne Expressway, the freeway that divided several of the city's historically black neighborhoods when it was erected decades ago. It would be replaced with a vibrant boulevard that reunites those neighborhoods in an infrastructural act of poetic justice.

It's hard to overstate the gravity of such proposals. Few urban design initiatives can instantly transform a large swath of a city like building (or unbuilding) a freeway. San Francisco saw this in 1991, when, ahead of the tear-down trend, the city demolished the bay-adjacent double-decker Embarcadero Freeway after it was damaged in an earthquake. Today, the area where the Embarcadero once stood has evolved from a forbidding dead zone to a bustling waterfront and tourist magnet. Standing there now, you'd never guess it was once the site of 16 lanes of through-traffic.

Now, other cities want their own Embarcadero miracle. Tony Ortiz lives in Crotona Park East, the Bronx neighborhood made famous when President Carter visited its burned-out ruins in the '70s. Ortiz, an 84-year-old, white-haired bantam rooster of a man, moved here from Puerto Rico in 1946, and remembers life before the Sheridan Expressway. The sidewalks were "busier with people," he says, standing in front of his six-story building a block from the expressway. He and his friends boxed in the streets, where he once proudly knocked one of them out cold. But after the Sheridan was built, Ortiz mainly remembers a neighborhood in decline and the stench of arson.

Today, the area, while still poor, has bounced back considerably. And now, New York is studying plans to tear down the Sheridan, which runs along the Bronx River right past Ortiz's window, and replace it with a stretch of waterfront parkland. It could include swimming pools, soccer fields, a 30,000-square-foot recreation center and housing similar to that which was bulldozed to make way for the freeway back in 1958.

It would be a dazzling turn of events for an area that time once nearly forgot. But would removing the freeway really revive the neighborhood in and of itself? Probably not. Because even though Ortiz remembers the Sheridan as the moment prosperity turned to blight, the truth is, places like Crotona Park East probably would have declined anyway. These were neighborhoods that almost certainly would have succumbed to depopulation, crime and the crack epidemic, freeway or no, simply because they were vulnerable communities during a difficult time.

But even if freeways weren't the lone catalysts of decline, removing them could still spur positive change. Cities are vastly more resilient places today than they were in the 1960s. In 2011, revitalization is more possible than ever --  you just need to lay the groundwork for it. Ask John Norquist, who, as mayor of Milwaukee, presided over the demolition of the Park East Freeway in 2002. The elevated structure was "the death of any property around it," Norquist says. Now, a concerted effort to draw new businesses seems to finally be panning out. After a slow start, the reclaimed area has 24 acres of parks, waterfront and burgeoning commercial development. Manpower Group, the temp agency giant, recently relocated there from the suburbs, and the space is connected by a riverfront recreational trail to the "Beerline," a stretch of new middle-class development along the city's old freight tracks.

The boldest tear-down proposal, however, might be in New Orleans, where local activists are working to restore a corridor that was once the pride of the city's African-American business community. Claiborne Avenue, an elegant boulevard famous for its hundreds of oak trees, once formed the shopping district of Treme and several other black neighborhoods. But in the late 1960s, the avenue was plowed under, and soon the Claiborne Expressway was rising in its place. (You can hear it being built to the ominous sound of pile drivers during the bad-trip cemetery scene in "Easy Rider.")

The proposal for the Claiborne corridor would remake the avenue much like the old one (minus the oaks), stitch it into the street grid, and let businesses grow alongside. It would also reunite the neighborhoods the freeway divided, allowing residents of the north side to benefit from the south side's proximity to the French Quarter. As for gentrification fears, John Renne doesn't foresee an influx of wealthy people displacing the current residents. "If there's a pendulum and gentrification is on one side, we're on the other side," he says. "We're in blight. It would have to swing pretty far to get to gentrification." Polls show the city is behind the plan -- now activists need to get Mayor Mitch Landrieu on board. The mayor has called it a potential "game changer" but has not officially thrown his support behind it.

Where do these grand plans leave the lowly car commuter? In pretty good shape, as it turns out. In case you haven't been on an urban freeway lately, allow me to blow your mind: They don't work like they're supposed to. They're quick to deteriorate, clogged at all the wrong times and offer little versatility when problems arise -- one collision can make 10,000 people late for work. In fact, the dirty secret of freeways is that they don't reduce traffic, they create it. Ask any urban planner: Give people more roads, and more of them will drive. Studies show that, in most cases, removing a freeway adds only a few extra minutes to commute times. At the same time, most of the freeways currently on the chopping block are underused anyway. (The day I drove to the Bronx to meet Tony Ortiz, the Sheridan was empty enough to walk across.) The drivers-versus-transit-riders stereotype doesn't hold, either: A study by Renne's students found that in New Orleans, the vast majority of locals want the Claiborne Expressway gone -- including 50 percent of the drivers who use it regularly. "No one's advocating for putting [the freeway] back" in Milwaukee now that it's gone, says Norquist, and getting rid of it "killed forever the idea of putting a freeway around the downtown."

Improved traffic flow, fewer roads to maintain, nicer neighborhoods -- what's not to love? The funny thing about freeways: People get attached to them, even when they do more harm than good. Renne's students found a small segment of the community around the Claiborne had grown fond of it, even those who didn't use it. Some feared gentrification if it were removed. And a few felt an emotional bond with their elevated highway -- one local resident expressed dismay that his tradition of barbecuing under the expressway with his son might end.

But such opinions are anomalies. For most residents of these communities, tearing down the freeways that crashed through their neighborhoods half a century ago would rectify a long-standing injustice. Removing urban freeways could open up whole new business districts, provide space for parks where they're needed most, free up land for affordable housing, and create vast new waterfront tourist meccas. In Seoul, South Korea, one freeway demolition even unearthed a river that runs right through the city. Buried by the highway for 30 years, the Cheonggyecheon Stream has since become a popular recreation spot, and the mayor who tore down the freeway to reveal it was elected president in a landslide soon afterward. Apparently his supporters had no trouble getting to the polls.