Did the Grammys actually get it right?

The awards remain clueless about metal, R&B and Americana -- but amazingly, it's hard to argue with the major picks 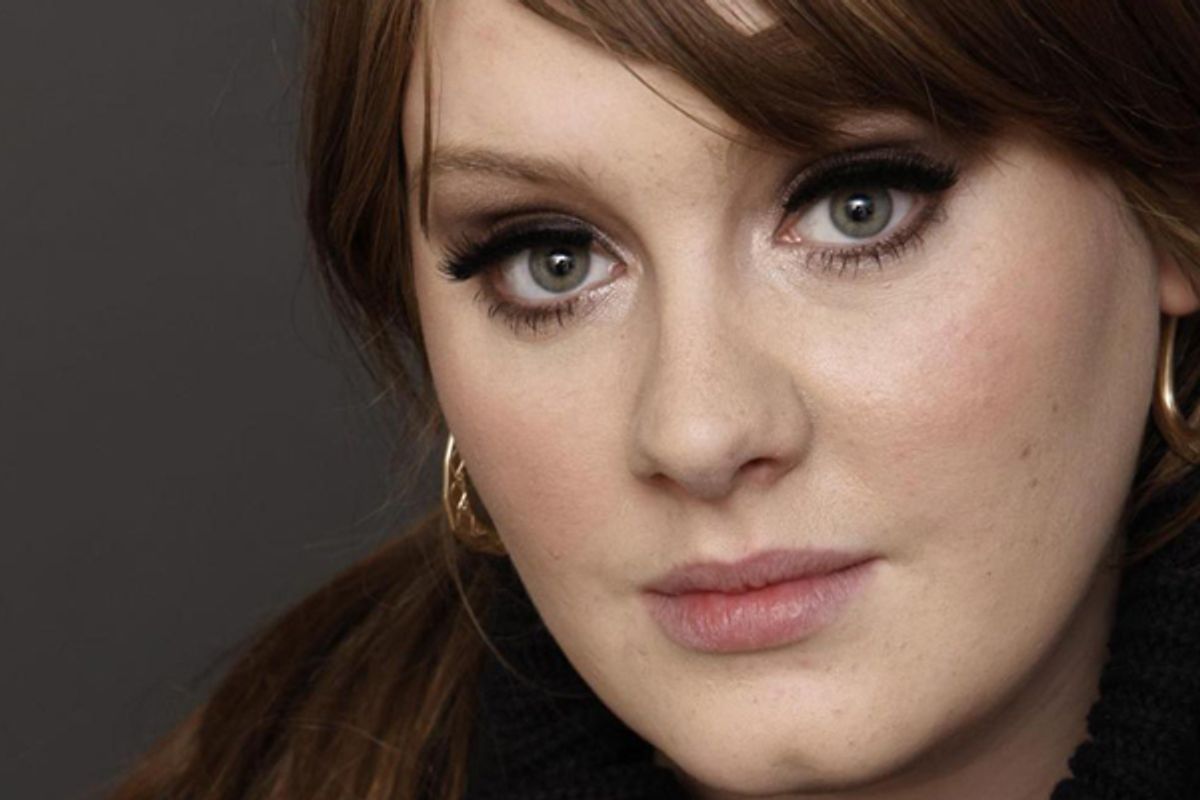 ‘Tis the season for gathering family near, taking generous sips from steaming cups of mulled cider or hot toddy, watching the skies for that first snowflake -- and for bitching about the Grammys.

That last tradition may not be quite as old as the others, but it is surely practiced with just as much enthusiasm and vigor. Each year the Grammy nominations, which are determined by members of the National Academy of Recording Arts and Sciences, engender what often sounds like deafening protest. Some music fans think the nominees are too populist, while others think they’re not populist enough; some ponder the hair-splitting difference between record of the year and song of the year, while others — many, many others — simply ignore the classical and New Age categories. Most people, however, bemoan the exclusion of their favorite artists.

For the second year in a row, however, the Grammys have played Grinch by actually getting the major categories right. Mostly right. Well, they certainly didn’t embarrass themselves.

Just like last year, when album/song/record of the year trifecta actually included some intriguing and even excellent artists, this year’s top nominees include some incredibly deserving musicians. Sure, you could argue that the Foo Fighters’ aggressively mediocre "Wasting Light" would have been safely forgotten if not included among the nominees, and I’d argue that any list that includes the enormously insufferable Mumford & Sons — surely one of the most baffling grass-roots success stories since Insane Clown Posse — is essentially flawed. And just to remind you that the Grammys have some of the weirdest time-frame regulations, there are nominations for Kanye West’s still excellent "My Beautiful Dark Twisted Fantasy" and Rihanna's "LOUD," both from late 2010 and already feted on innumerable year-end lists.

But the list also includes two nominations for Bon Iver’s gorgeous “Holocene,” from the band’s self-titled second record. And in retrospect, Adele was a shoo-in, but what’s amazing about her juggernaut second album "21" is that it’s just as good as — maybe even better than — all those sales would indicate. And Bruno Mars’ forward-thinking revivalism gets a few mentions, as does Lady Gaga’s “Born This Way,” to which I say, finally: Uncle.

The inclusions are mostly worthy, and the omissions likewise promising: There are no desperate bids for ratings (sorry, Bieber) and no self-congratulatory nods to industry veterans releasing would-be comeback albums (see: Herbie Hancock in 2008, Steely Dan in 2002). In fact, the lists for album of the year, record of the year, song of the year and even best new artist all seem strangely democratic, representing a variety of pop genres. That means there’s going to be some serious competition here. Will Katy Perry and Lady Gaga split the dance-pop vote? Could Bruno Mars pull an upset? Is Bon Iver the Jon Huntsman in this scenario? I’ll probably put all my money on Adele for a sweep, but a win by Gaga or Bon or Bruno or Ye wouldn’t prompt a sledgehammer to my television set.

On the other hand, let’s remember back to Feb. 13, when the last batch of Grammy winners was announced. At the end of the broadcast, Canadian indie rock mainstays the Arcade Fire won a surprise victory for album of the year. Their appropriately sprawling third album, "The Suburbs," beat a humorless bout of navel gazing by Eminem, a collection of candy-coated pop by Katy Perry, a country-in-name-only album by Lady Antebellum and a monster hit by Lady Gaga. It was the Arcade Fire’s biggest triumph, swiftly followed by their greatest indignity: Overnight tweets and blog posts decried the decision, and a Tumblr posed the question Who Is Arcade Fire? Some guy even took out a full-page ad in the New York Times to bitch about it.

A similar fate could befall Bon Iver if “Holocene” beats out “Rolling the Deep” and “The Edge of Glory” this February, making a Grammy less a gleaming crown than a set of lead boots. More interestingly, the Arcade Fire debacle illustrates just how fragmented contemporary audiences have become and just how ill-suited the Grammys are to represent those vying constituencies. For many viewers (myself included), the Arcade Fire weren’t just obscure nobodies; they were as close to the Biggest Band in the World as you can get these days. "The Suburbs" debuted at No. 1 on the Billboard album charts just a few months previous, and the group had sold out Madison Square Garden. They had even licensed a song to the Super Bowl (with all royalties benefiting Partners in Health’s relief efforts in Haiti).

Their win may have shocked legions of Little Monsters and Eminem diehards, but others were shocked that so many people were shocked. It was an eye opener: A band that all but defined a particular audience could still be virtually unknown to the larger music-listening population. It’s yet another sign of the fragmentation and entrenchment of music audiences in the digital age, and surprisingly the major Grammy categories — record/album/song of the year, and possibly best new artist — seem to be well equipped to mirror this development. For two years at least, they’ve spotlighted diverse nominations that speak to the breadth and ambition of contemporary pop music, with a strong sense of the past but an eye squarely on the future.

Oh, but keep scrolling down that list and things start to look a little less impressive. The Grammys' annual forays into specific genres reveals a voting block that defines pop music too broadly but thinks of metal, R&B, dance, Americana and jazz in only the most superficial terms. Consider the award for best hard rock/metal performance. The term “hard rock” is an obvious catchall, but Dream Theater and Sum 41 certainly don’t belong on this list (and a win for either would reenact the ’89 Jethro Tull/Metallica debacle all over again). As one of the most popular traditional metal bands, Mastodon isn’t a bad choice, nor is Megadeth, who’ve proved durably heavy while many of their peers have softened. But there’s not much depth here, especially considering that metal has undergone a renaissance over the past few years, allowing acts like Skeletonwitch, Kylesa, Wolves in the Throne Room and Hammers of Misfortune to redefine many of the genre’s most historically rigid conventions.

Or look at the Americana category. There’s nothing wrong with Levon Helm, Ry Cooder or Emmylou Harris, and apparently I’m the only person who thought "Blessed" was a seriously subpar Lucinda Williams effort. But you could have compiled this list at any time over the last 25 years. These acts are being recognized less for their music and more for their longevity. Only the obscure and kinda doofy Linda Chorney, nominated for her sixth album, "Emotional Jukebox," is a surprise. But you could scratch any of these names and substitute lesser-known but much better albums by Hayes Carll, A.A. Bondy, Amanda Shires, Buddy Miller and Abigail Washburn.

Similar arguments could be made this year about the alternative rock, contemporary blues, and folk categories. In fact, the Grammys aren’t truly representing the realities and innovations of these genres, but instead what seems like an uninterested, third-person perspective on them. They’re skimming the surface for obvious names rather than spotlighting the genres’ greatest accomplishments. And while the major categories seem to be evolving and even becoming more adventurous, the future doesn’t look especially bright for categories further down the list. Earlier this year, NARAS announced that it was cutting more than 30 awards, including best Hawaiian album, best Native American album, and several from the Latin category.

Historically, the organization  has treated these categories as somewhat fluid, making changes to reflect new social, technological, musical or business developments. For example, there are no longer Grammys for best jazz composition of more than five minutes duration, nor are there separate gospel awards for white and black artists. But these severe cuts mark an awkward consolidation at a time when audiences are dividing. If they want to remain relevant, the Grammys should not only add more categories, but explore them more thoroughly. Otherwise, we’ll all just have to keep bitching about them being out of touch and irrelevant.