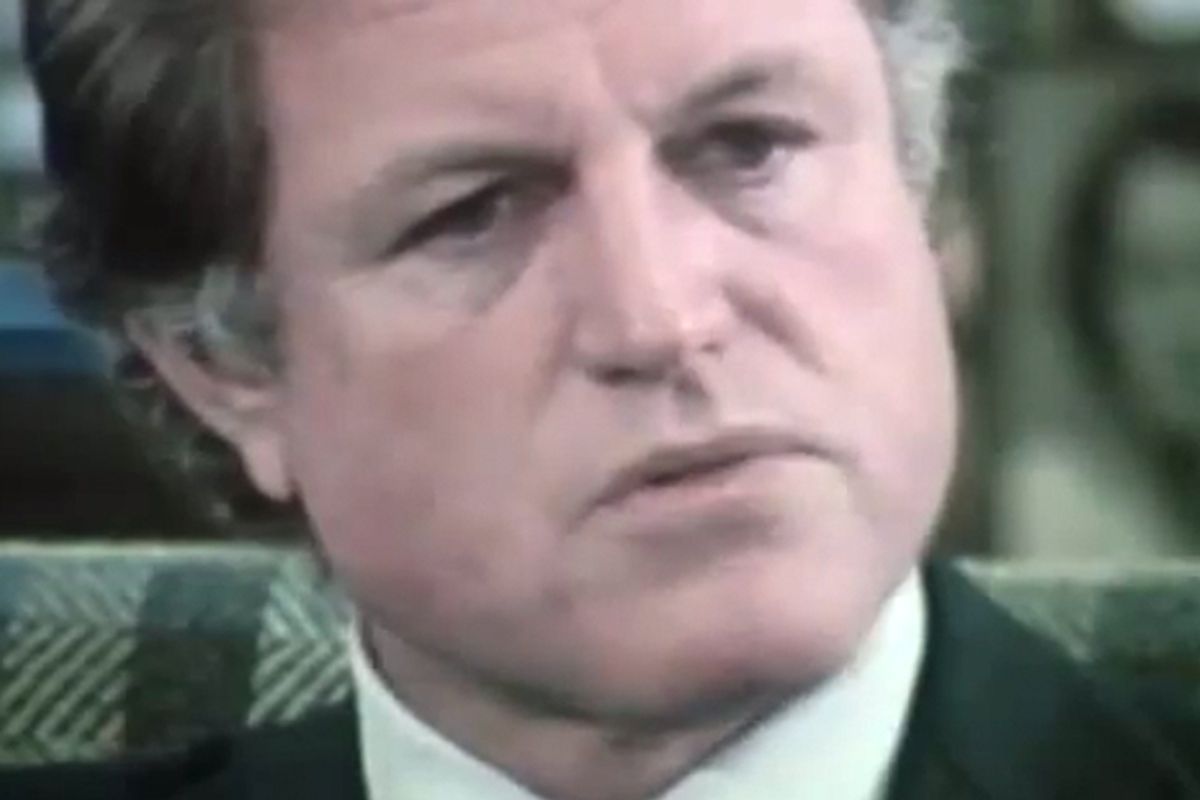 Ted Kennedy during his 1979 interview with Roger Mudd.
--

The fallout from Mitt Romney's poorly received interview Tuesday with Fox News' Bret Baier keeps coming, with Baier revealing Wednesday night that Romney complained after the taping that his questions had been "overly aggressive" and "uncalled for." Now conservatives, who hardly seemed impressed with Romney's performance in the interview to begin with, are openly mocking the GOP candidate for being thin-skinned.

The interview was most notable for Romney's petulance. Baier asked him a series of questions about his various flip-flops, noting that "your critics charge that you make decisions based on political expediency and not core conviction," and Romney responded with evident annoyance, pretending that he'd only ever changed his position on abortion and telling Baier, "I don’t know how many hundred times I’ve said this, too. This is an unusual interview.”

It was a baffling performance. Romney rarely agrees to extended, on-camera interviews and had to expect that his assorted changes of heart -- on abortion, on gay rights, on immigration, and so on -- would feature prominently in the conversation. As one conservative commentator put it, "Actually, if there’s any criticism to be made of Baier’s questioning, I think that’s it — not that the questions were 'uncalled for' but that they were a little too called for because they cut right to the heart of conservatives’ concerns about Romney." By handling the interview the way he did -- and by making it a bigger story by complaining to Baier -- Romney has succeeded in bolstering the right's doubts about him, not defusing them.

The bigger problem for Romney is that this comes just as the political world seems to be deciding that he really is in danger of losing the Republican nomination to Newt Gingrich, who is poised to open significant leads in national and key early state polls.

In that sense, the Baier interview calls to mind Ted Kennedy's fateful sit-down with CBS newsman Roger Mudd in November 1979. Kennedy was set to launch his Democratic primary challenge to Jimmy Carter (although he hadn't formally announced it yet) and agreed to an extended interview that would air in a prime-time CBS News special. At the time, Kennedy's prospects for victory seemed strong; polls showed him leading Carter, whose own job approval numbers were perilously low and whose presidency had infuriated many of the traditional component groups of the Democratic coalition. Like Romney this week, Kennedy was asked a seemingly elementary question that he surely should have seen coming: "Why do you want to be president?" His hesitant, rambling, and confusing response remains famous all these years later:

The impression that this created was devastating for Kennedy, whose campaign essentially peaked before it began. By the end of 1979, he was running well behind Carter (although the rally-around-the-flag effect created by the November 1979 storming of the U.S. embassy in Tehran had a lot to do with this too) and it wasn't until well into the primary season that Kennedy finally found his footing. But by that point, Carter had built a commanding delegate advantage. In the summer of 1980, polls once again showed that Democrats preferred Kennedy to Carter as their general election candidate, but a desperate Kennedy effort to change the convention rules and free pledged delegates from their commitments failed, guaranteeing an easy first-ballot victory for Carter. In other words, if he hadn't stumbled out of the gate so badly, Kennedy probably could have defeated Carter.

Granted, Romney's performance on Fox this week wasn't as overtly damning as Kennedy's. He was never at a loss for words and was coherent in all of his responses. It was his peevishness -- and his attempts to play dumb when Baier suggested that conservatives might doubt his convictions -- that attracted attention, and his whining to Baier afterward that extended the story. But the bottom line is that it was a very bad interview for Romney at a very sensitive time. If, somehow, Gingrich goes on to win the GOP nomination, the Baier interview may be remembered as a key moment in Mitt's demise.