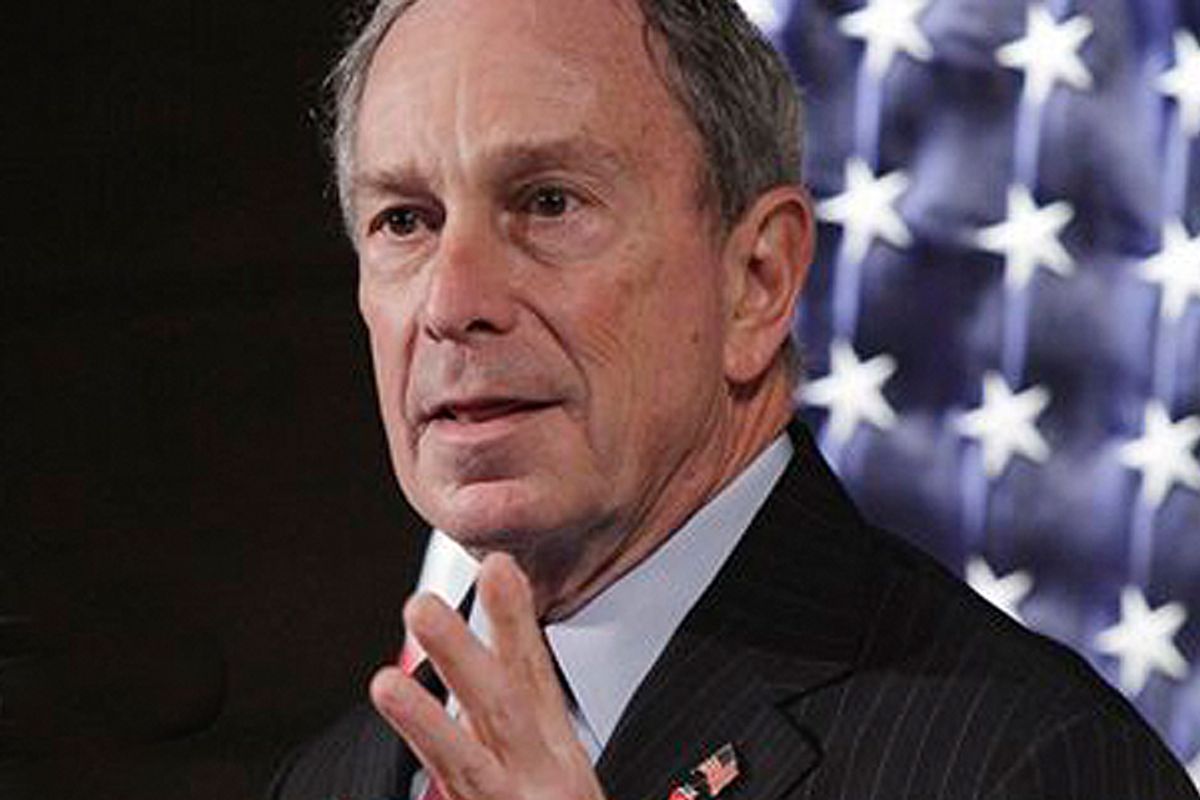 Billionaire New York City Mayor Michael Bloomberg has his own army! No, it's not a private security firm, like Blackwater. It's actually, according to the mayor, the New York City Police Department.

Bloomberg, again threatening vaguely to make that presidential run that the American people are decidedly not calling for, told MIT last night that he doesn't even need to be president, because all of his autocratic desires are fulfilled by running America's most populous city as his private fiefdom.

“I have my own army in the NYPD, which is the seventh biggest army in the world. I have my own State Department, much to Foggy Bottom’s annoyance. We have the United Nations in New York, and so we have an entree into the diplomatic world that Washington does not have,” Mayor Bloomberg said.

I'm not entirely sure what he means by having his own "State Department." The city's independent nonprofit tourism agency, maybe? But he didn't mention that his army also comes with its own international (and questionably legal) intelligence-gathering apparatus, just like the CIA and FBI, except without any sort of oversight, congressional or otherwise.

Bloomberg, of course, is being a touch ironic, but he's also not wrong. The NYPD has a 1,000-man army within its increasingly militarized ranks. It has tanks, combat rifles, anti-aircraft weaponry, non-lethal anti-terror sound cannons, and, supposedly, a submarine. And it's all under the command of one guy, Ray Kelly, who answers solely to one other guy: Mike Bloomberg.

Bloomberg's conception of the NYPD as "his army" explains a lot. Like why he thought it'd be OK to deploy them to Bermuda to help police his weekend home. (That plan was scuttled ... once it leaked to the press.) Or why he thought it appropriate to use the NYPD to prevent demonstrators from ... drumming on his block, one night.

If you want a sense of precisely how distanced from accountability NYPD commissioner Ray Kelly is, his response to being interrupted by a protester while addressing a Columbia class is illuminating. Faced with footage of police brutality, Kelly grinned and joked around.

A few minutes later, another student asked Kelly why most people who are arrested are incarcerated for “drug crimes.” Dinkins said he didn’t understand the question, and things got confrontational between the student, Kelly, and Dinkins pretty quickly. The student’s SIPA colleagues were not pleased—a few students and a TA asked if she was registered for the class. “No,” she said, “but I do have a question.”

Commissioner Kelly, still grinning, leaned over to another guest for today’s class, New York District Attorney Cy Vance, and loudly whispered, “Says something about the security of this school, doesn’t it?”

(Yes, that's former Mayor David Dinkins, who himself once faced a revolt of entitled police officers chafing at the prospect of being held accountable for law-breaking and corruption.)

In case Kelly is unfamiliar with the easily available data regarding what his massive army actually does most days, the NYPD makes more arrests for possession of marijuana than for any other crime. Marijuana possession is used as a pretext to sweep up and arrest tens of thousands of black men every year. And the commissioner pretends he's totally unaware of that fact, even as his department defends the practice as necessary for our safety.

Powerful (and popular) commissioner Kelly has basically escaped every NYPD scandal with his reputation unsullied. Mayor Bloomberg is generally treated by most of the local press as though the fact that he surely means well excuses all manner of illegal activities, lax oversight, and contempt for civil liberties and the law.

Harry Siegel, in a good recent piece on how the recent scandals of the NYPD are actually generating some negative ink for once, actually undersells the recent revelations:

The overly-aggressive response to the Wall Street “occupation”—which began with arresting dozens on the Brooklyn Bridge, proceeded to involve the pepper spraying of protesters, and concluded with a forced media blackout and the arrest of several reporters during the final, middle-of-the-night militarized “clean up” and Thursday's "day of action"—may yet tip the scales toward a more normalized relationship between the city and the NYPD. It is the culmination of a scandal-ridden year. A partial list of the past year's troubles includes the trial of two cops accused of rape; a leak-hindered internal affairs investigation into a ticket fixing conspiracy that some rank-and-file officers responded to by spitting on lawyers in the courthouse; a belated outcry over the frequently intrusive stop-and-frisk policy focused on poor and minority neighborhoods; revelations of the department’s secret intelligence program to collect information on Muslims; and the rough arrest of a black City Council member at a parade.

This leaves out, to name one major recent scandal, the 14-year NYPD veteran recently found guilty of planting drugs on an innocent subject. (It also leaves out a third cop credibly accused of rape.) (And the eight officers recently charged with smuggling guns -- and cigarettes! -- into the city.)

At the crooked narcotics detective's trial, a retired cop claimed the practice of planting drugs to inflate arrest numbers was widespread, yet another unintended consequence of our data-driven mayor's insistence on an NYPD that measures success by the number of people -- predominantly young black people -- subjected to the criminal justice system. The mayor has, in the past, dismissed serious criticisms of his "CompStat" system with ad hominem attacks on police unions.

In New York City, of course, each bad cop, or ring of bad cops, or unruly mob of bad cops is treated as an outlier. This is a press -- especially the tabloid papers -- that has long simply not cared that the NYPD routinely lies to journalists as a matter of departmental policy. It is widely known, for example, that arrest and ticket quotas exist, NYPD denials being approximately as worthless as a summons mistakenly issued to someone with Patrolmen's Benevolent Association connections. Police statements on violent incidents are routinely contradicted by video evidence. Kelly feigns ignorance of his department's methods of maximizing marijuana arrests.

But an army thinks differently than a simple civilian police force. They're accountable only to their commanders, and not to the citizenry.