Why can't it be Ron Paul?

If Newt Gingrich can catch fire in the GOP primaries, then why not a libertarian with strong Tea Party credentials? 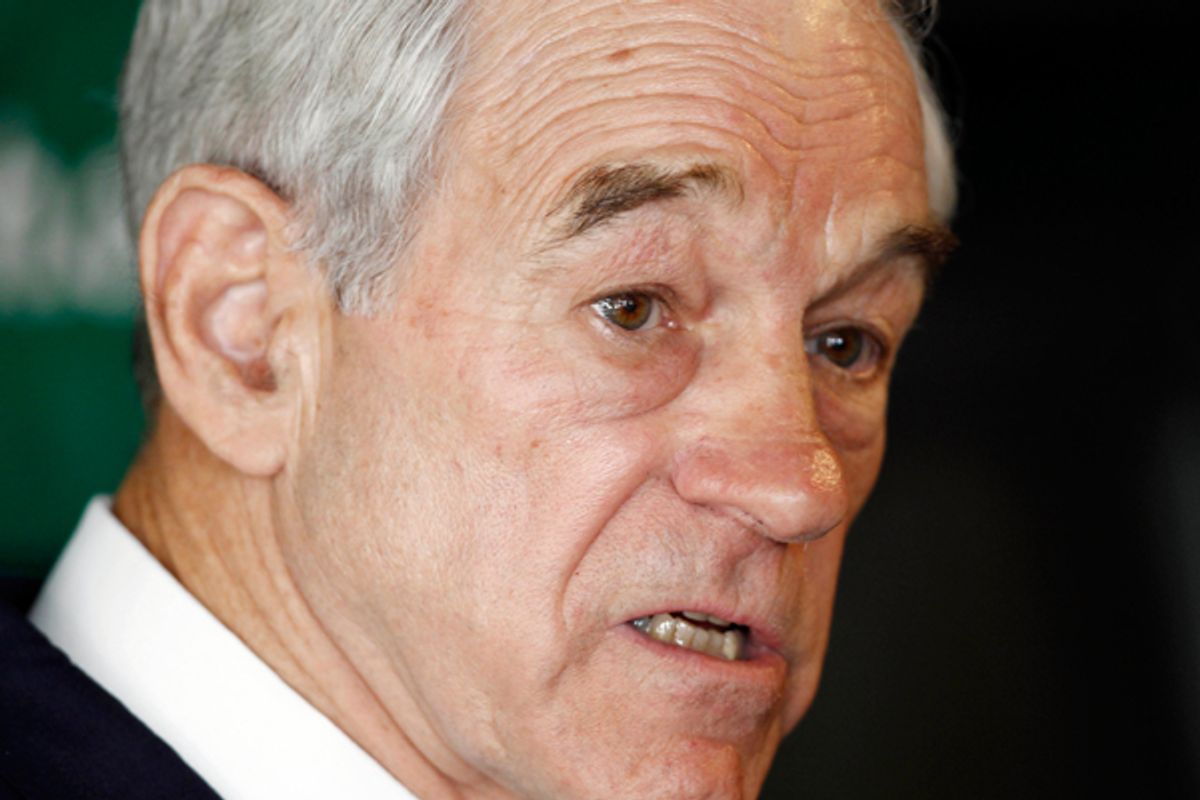 It's an article of faith among Ron Paul's supporters that the media is ignoring the story of the year, or maybe the decade, or even the century or millennium: their candidate's pending rise to the Republican presidential nomination. Of course, Paul's backers talked the same way four years ago, when the Texas congressman's success was limited to a scattering of mostly distant second- and third-place finishes in caucuses that most other campaigns ignored, which explains why the political world is still treating him as more of a curiosity than a serious candidate.

But, the Paul crowd counters, things are different this time. And here they seem to have a point. Paul is generally faring better -- much better, in some instances -- in polls than he was in the 2008 cycle, running in the high single-digits nationally (better than Rick Perry) and emerging as a dark-horse contender to win Iowa, where a recent survey showed him bunched in what amounted to a four-way tie for the lead. And the center of the Republican Party has moved sharply to the right since 2008, toward the outsider-friendly anti-government purity that Paul embodies. Plus, the GOP race is unusually unsettled -- the "inevitable" Mitt Romney can't break 25 percent and Newt Gingrich, of all people, is now threatening to open up a wide lead nationally and in some of the early states -- and delegate apportionment rules have been altered in a way that could stretch out the process.

Paul's campaign insists it has a strategy to capitalize on this unique moment, one that relies on competing aggressively in Iowa and New Hampshire and gobbling up delegates in low-turnout caucuses where intensely loyal and well-organized supporters can dramatically affect the outcome. So shouldn't we treat Paul as a real prospect for the GOP nod -- or at least as real a prospect as Gingrich?

Actually, there's still a good reason not to: Despite his clearly improved standing, the evidence remains strong that Paul is a uniquely unacceptable option for a wide swath of the Republican electorate -- suggesting that he faces an impenetrable ceiling in his quest for the nomination.

Take, for example, an ABC News/Washington Post survey released this week that finds that Paul's favorable and unfavorable scores among GOP voters are roughly even -- 39 percent favorable and 34 percent unfavorable. The significance of this becomes clear when you see that the same poll pegs Romney's favorable rating at 56-29 percent and Gingrich's at 60-26. This suggests that Romney and Gingrich, at least for now, would both be acceptable nominees for most Republican voters, even those who are not now backing them. But Paul faces more resistance, presumably because of the areas where his platform runs counter to modern conservative orthodoxy (particularly on foreign policy) and because opinion-shaping conservative media outlets and commentators tend to afford him pariah status.

This point is reinforced by a CNN poll from just before Thanksgiving, which asked Republicans if they would be "disappointed" or "upset" if the party nominated each of the candidates. Twenty-eight percent said they would be if Romney is the candidate and 27 percent said the same about Gingrich, but Paul's number was nearly twice as big -- 50 percent, or the worst of any GOP candidate. Similarly, a new PPP poll in the key early state of Florida (which showed Gingrich opening a massive lead over Romney) put Paul's favorable/unfavorable score among Republicans at a poisonous 25/57 percent. He also rated as the least likable GOP candidate in a recent Fox News survey of national Republicans.

Granted, volatility has been the rule in the Republican race. Just a few months ago, Gingrich's unfavorable numbers were roughly where his favorable ones are now. But a series of strong debate performances, collapses by Rick Perry and Herman Cain, and favorable reassessments from numerous conservative commentators have turned him into something of a rock star among Republican voters. But it's hard to see Paul replicating this turnaround, mainly because he wears his apostasies as badges of honor. This ensures him a loyal and devoted following, but also hardens the determination of many Republican opinion leaders to marginalize him. To win a Republican presidential nomination these days, you need outlets like Fox News and voices like Sean Hannity and Rush Limbaugh making your case -- or at least not actively undermining you.

This isn't to say that Paul's campaign is a waste of time. He's a valuable addition to the GOP debate stage and he provides a voice for a sizable number of voters who believe that the modern definition of conservatism has been distorted. Plus, he could potentially attract significant support and media coverage and influence the general election conversation if he decided to give up on the GOP and mount a third-party bid. But running in the general election as the Republican candidate? There's still no reason to think that will happen.