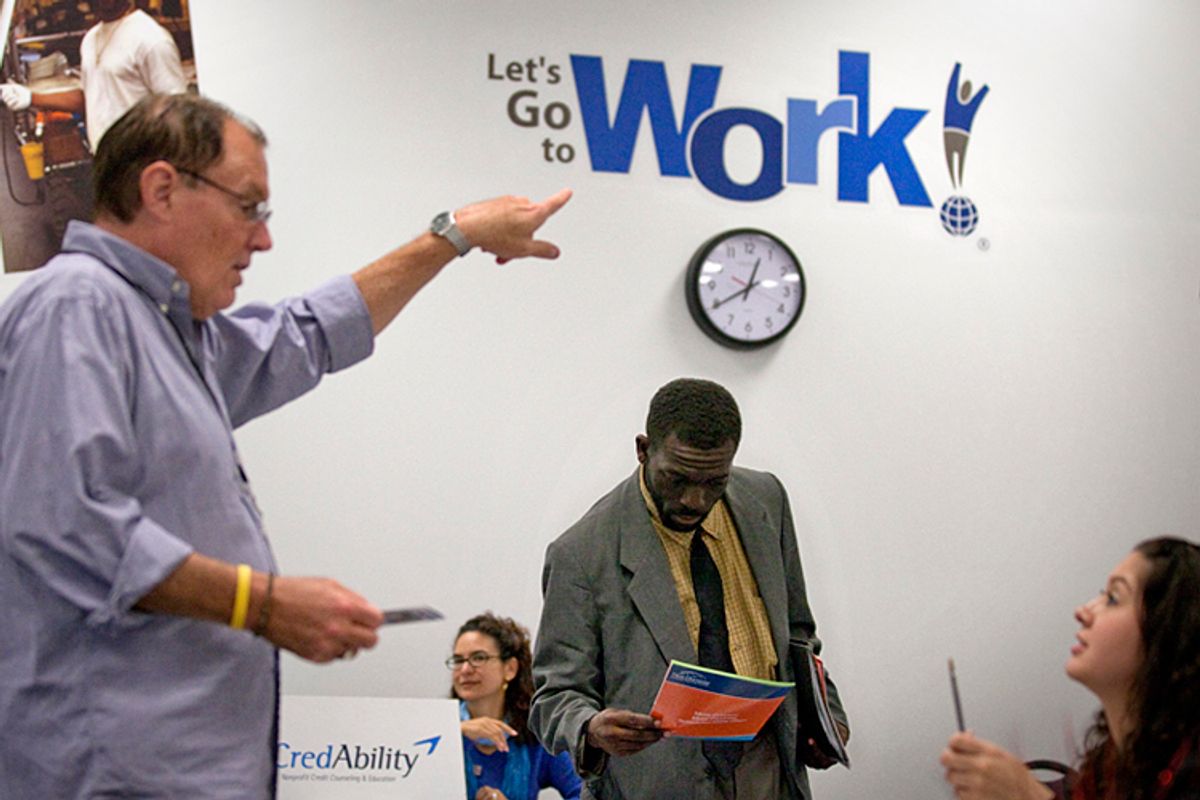 In this Oct. 4, 2011 photo, Snotti St. Cyr, center, looks over a brochure while attending a job fair at a Goodwiill store in Atlanta. The number of people who applied for unemployment benefits rose slightly last week, a sign that the job market remains weak. (AP Photo/David Goldman) (David Goldman)
--

Merry Christmas, President Obama. The top-line takeway from the November jobs reports makes for a White House-friendly headline. The unemployment rate in November fell 0.4 percent, from 9.0 to 8.6, a remarkable drop down to a two-year-low after a year in which the percentage of unemployed hardly budged. According to the Bureau of Labor Statistics, the U.S. economy also added 120,000 jobs, in line with the trend that has been in place for the past few months.. The broadest measure of unemployment, the U-6 number that counts workers in part-time jobs and those who have given up looking for work, fell from 16.2 to 15.6 percent.

The BLS also revised September's (from 158,000 to 210,000,) and October's (from 80,000 to 100,000) jobs numbers. In recent months, the BLS revisions have consistently trended toward more positive job creation numbers than previously reported, an encouraging sign indicating that the economy's fundamentals may be improving faster than contemporaneous data are indicating.

The news will likely boost investor sentiment in the short-term, but the numbers inside the numbers aren't quite as encouraging. State and local governments trimmed payrolls again, by 20,000. Overall, government payrolls have fallen by more than half a million over the last two years.

The labor force participation rate also fell -- implying that around half of the drop in the unemployment rate can be attributed to the 320,000 Americans who have simply stopped looking for jobs. Average hours worked per week didn't budge at all and average hourly wages fell -- clear signs of a weak labor market.

On the other hand, the employment-to-population ratio rose a tad, to 58.5 from 58.4. That's a positive sign, signifying the direct opposite of the labor force participation data. So there's a lot of noise in this report, grist for optimists as well as pessimists.

But bottom line: a gain of 120,000 jobs is not enough to explain a .4 percent drop in the unemployment rate. We've seen this kind of disjunction before -- the numbers come from two different surveys that often point in slightly dissimilar directions. The question going forward will be whether upward revisions in the overall jobs numbers continue, and whether enough Americans become convinced that there are actually enough job opportunities available to make it worth jumping back in. A truly positive unemployment number for December might be one in which the unemployment rate rises -- if there is a substantial increase in the number of Americans who start looking for work again, that could mean real labor market positive momentum..

Overall, November's report supports the picture that's been emerging ever since the summer. The economy is growing, slowly.