A look back: Newt's most outlandish positions 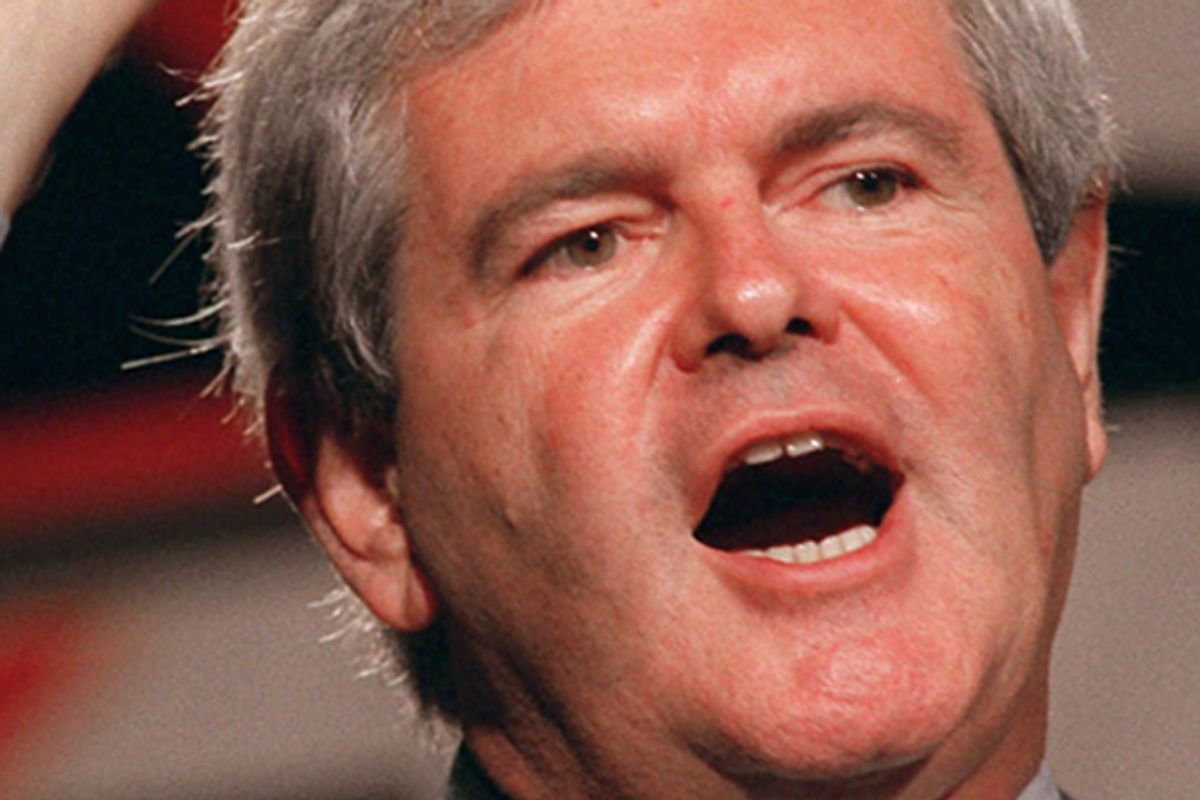 Newt Gingrich is up 31 points in Florida, according to one poll, and he is openly predicting that he will be the Republican nominee for president.

In the meantime, it’s worth revisiting some of the lesser-known areas in Gingrich’s record. In his three-plus decades in public life, the former House speaker has racked up an impressive record not only of  flip-flops, but also of policy positions that are profoundly unorthodox, some would say outlandish.

This is by no means a comprehensive list – if I'm missing any Gingrichian gems, email me or leave a comment.

A year later, he writes a letter to the Journal of the American Medical Association reiterating his view: "We believe licensed physicians are competent to employ marijuana, and patients have a right to obtain marijuana legally, under medical supervision, from a regulated source." He later disavows the stance.

1994: As part of his push for welfare reform, Gingrich proposes that states end aid to poor single mothers and their children be sent to orphanages that would be built with the saved money. Responding to criticism of the plan by then-first lady Hillary Clinton, Gingrich cites a 1938 Hollywood film.

"I'd ask her to go to Blockbuster and rent the Mickey Rooney movie about 'Boys Town,'" he says.

1995: Gingrich proposes the death penalty for those involved in the drug trade, drawing a parallel to the draconian policies of Singapore and Malaysia.

"We want to stop all drug traffic. If you bring in a commercial quantity of illegal drugs, we will execute you," he says during a book tour (via the San Diego Union-Tribune on Nexis).

But Gingrich’s Drug Importer Death Penalty Act of 1996 ultimately goes nowhere. Asked by Yahoo News in November if he stands by this position, Gingrich responded, "I think if you are, for example, the leader of a cartel, sure."

2005: Gingrich calls for "universal but confidential DNA testing" as part of healthcare reform, according to an account in a South Carolina newspaper. (Via National Review)

2005: During the Ward Churchill affair, Gingrich suggests tenure should be abolished at state universities.

"We ought to say to campuses, it’s over … We should say to state legislatures, why are you making us pay for this? Boards of regents are artificial constructs of state law. Tenure is an artificial social construct,” he says. “Tenure did not exist before the twentieth century, and we had free speech before then. You could introduce a bill that says, proof that you’re anti-American is grounds for dismissal."

2006: Gingrich suggests the U.S. should pursue a counter-terrorism strategy that would curtail terrorists’ free speech rights, predicting "a serious debate about the First Amendment."

2009: In a speech to the American Israel Public Affairs Committee (AIPAC) police conference, Gingrich declares an electromagnetic pulse (EMP) attack to be one of the gravest threats to U.S. national security. He cites a fictional thriller to bolster his case:

"What I’m about to say to you is from my heart, and from everything I’ve learned in almost fifty-one years, we are on the edge of catastrophic problems. If you get a chance, read my friend Bill Forstchen’s novel, One Second After, which describes the fate of a small town, after an electromagnetic pulse attack."

"There should be no mosque near Ground Zero in New York so long as there are no churches or synagogues in Saudi Arabia," he says. "The time for double standards that allow Islamists to behave aggressively toward us while they demand our weakness and submission is over."

2011: Angered by the liberal 9th Circuit Court of Appeals, Gingrich says he’d like to empower the president to fire judges.

"I would do no more than eliminate Judge Berry in San Antonio and the Ninth circuit. That's the most I would go for," he says. "But let me say this because I think this has to be part of our national debate. That's not a rhetorical comment. I believe the legislative and executive branches have an obligation to defend the Constitution against judges who are tyrannical and who seek to impose un-American values on the people of the United States."

2011: In an appearance at Harvard, Gingrich challenges child labor laws, floating the idea of replacing pricey unionized janitors with kids:

"Most of these schools ought to get rid of the unionized janitors, have one master janitor and pay local students to take care of the school," he says. "The kids would actually do work, they would have cash, they would have pride in the schools, they'd begin the process of rising."