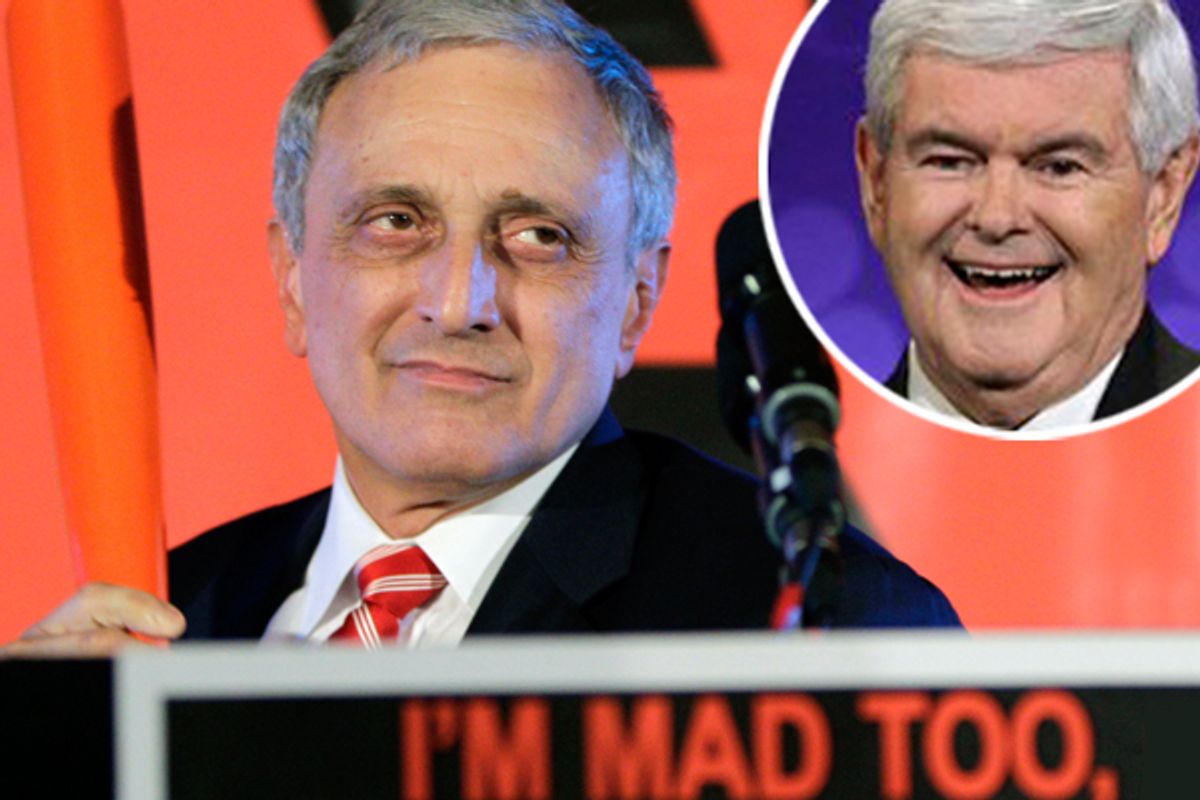 The reasons to assume that Newt Gingrich, who claimed a 21-point lead in a Rasmussen Reports poll of national Republicans released Thursday, will ultimately fizzle out are well-established by now.

He’s saddled with formidable baggage and a host of self-destructive tendencies and has failed to raise money (at least until very recently), run television ads, attract support from Republican elected officials and party leaders, and assemble anything that might be confused with a serious campaign organization. And his nomination would be a “heaven-sent” gift to President Obama, whose presidency Republicans have dreamed of ending since the moment it began. There’s just no way a candidacy like this should succeed.

But there’s one compelling argument for why it could anyway: What happened last year.

The 2010 midterm elections are rightly remembered as a full-scale rout for the Republican Party, which posted a net gain of more than 60 House seats, came close to erasing a 10-seat deficit in the Senate, and swept to power in statehouses across the country. But the other major theme of ’10 was the emergence of a powerful, decentralized, “purity”-obsessed force within the GOP, one that propelled candidates who were at least as implausible as Gingrich to stunning victories in several high-profile primaries.

That force, of course, was the Tea Party movement, which represented the right’s angry response both to the election of a Democratic president and to the Republican Party leader who (in the right’s view) had spent the aughts selling out conservative principles and enabling Obama’s rise. Thus did the Tea Party commit itself not just to defeating Democrats in the 2010 general election but also to nominating reliable true believers with independence from the GOP establishment.

In many cases where Tea Party candidates prevailed in primaries, it didn’t affect the GOP’s November prospects. This was particularly true in House races, where district lines are often drawn to give one party a clear advantage and where individual candidates don’t receive the kind of scrutiny and press coverage they would in higher-profile contests. But at the statewide level, victories by a handful of Tea Party favorites who before the Obama presidency would have been dismissed as gadflies caused severe general election complications.

The most famous example came in Nevada, where Republican primary voters insisted on nominating Sharron Angle, an erratic right-winger who ended up scaring off swing voters who had been eager to throw out Harry Reid. There was also Christine O’Donnell in Delaware, Ken Buck in Colorado, and Joe Miller in Alaska, all of whom went on to lose what would otherwise have been winnable fall races for the GOP. You could probably add Carl Paladino to this list; even though there was little chance that Republicans were going to beat Andrew Cuomo in New York’s gubernatorial race, Paladino’s landslide primary triumph over former Rep. Rick Lazio spoke to the depth of Tea Party rage. So did Rick Scott’s victory over former Rep. Bill McCollum in Florida’s gubernatorial primary, even if Scott did somehow eke out a win in November.

The question is whether all of this tells us anything about how a Gingrich-Romney fight might play out. It’s certainly possible that it doesn’t. After all, presidential nominating contests are much different from individual statewide races for Senate seats and governorships. All sorts of powerful people – interest group leaders, single issue advocates, media commentators, fundraisers, political professionals, elected officials up and down the ballot across the country – are heavily invested in the outcome, and committed to shaping it. The scrutiny is far more intense. And the process is spread out, giving influential party leaders time to react to surprise developments in early primaries and caucuses. It’s a lot harder for a fringe candidate to slip through.

On the other hand, the Tea Party conservatism remains prevalent within the GOP. The constant threat of a revolt from the right is why House Speaker John Boehner has spent 2011 advancing a politically toxic agenda and forcing one damaging showdown after another with Obama – and it’s why just about every Republican in the House has gone along with him, even those with more pragmatic tendencies. It’s also why Romney, despite being well-liked at a personal level by most Republican voters, has been unable to push past 25 percent in polls, even as his opponents self-destructed and the political world declared him inevitable. Evidently, a major chunk of the Republican universe wants the party led by an ideologically pure outsider.

In many cases, the Tea Party candidates who won primaries in 2010 did so even after Republican voters were warned that backing them would be suicidal. If that spirit is still alive and well, then it may be a mistake to write off Gingrich now.