The roots of the right's Mitt-phobia

The last time conservatives took a chance on a one-time apostate, they got burned 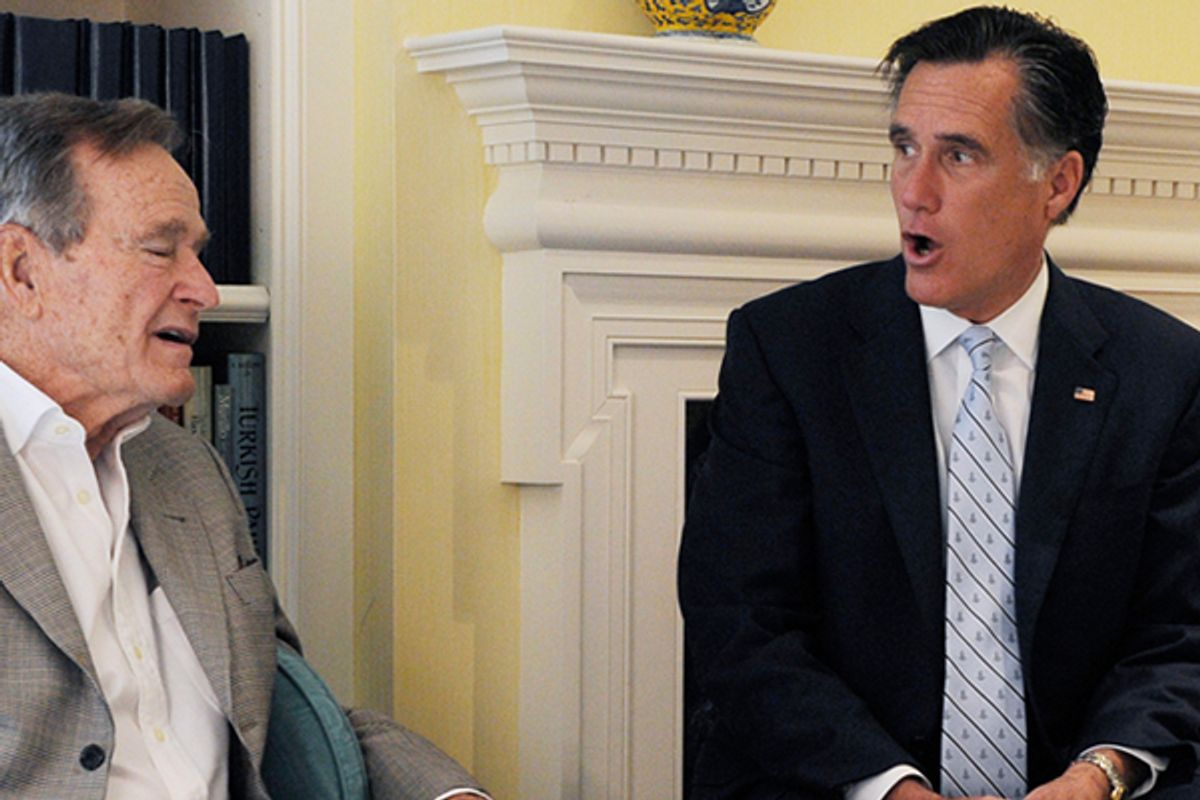 It's never really a bad idea for a Republican presidential candidate to sit for a photo-op with a well-liked Republican president from the past. But when Mitt Romney paid a call on George H.W. Bush in Texas on Thursday, he unwittingly underscored the central challenge that his bid for the GOP nomination faces.

In many ways, Romney's 2012 bid is a mirror image of Bush's 1988 effort -- but his path to the nomination is severely complicated by a shift within the Republican Party that Bush's presidency helped produce.

Just like Romney today, Bush faced deep distrust from his party's conservative base in '88, thanks to a political past that raised all sorts of doubts about whether he was the true believer conservative he claimed to be -- and whether he really believed anything at all. The son of a famously left-of-center Republican senator, Bush had traversed the political spectrum in search of power. He ran unsuccessfully for the Senate in Texas as a Goldwater conservative in 1964, won a House seat two years later and promptly broke with the right on civil rights and birth control, then after losing another Senate bid in 1970 (to Lloyd Bentsen), at which point he settled into a life as the consummate GOP establishment man, serving in a host of appointed roles (RNC chairman, ambassador to China and the U.N., and CIA director) in the '70s.

When he sought the Republican presidential nomination in 1980, Bush did so as the unofficial standard-bearer of the party's Rockefeller wing, supporting abortion rights and the Equal Rights Amendment and belittling as "voodoo economics" the supply-side theories that his main opponent, Ronald Reagan, was touting. But the Rockefeller wing was in decline, and Reagan's decisive victory confirmed that the center of the GOP had moved sharply to the right. Thus, after after finagling his way onto Reagan's ticket, Bush spent the next eight years swearing off his past crimes against conservatism and reinventing himself as a staunch Reaganite.

The contours of Romney's political journey are similar. The son of a Rockefeller wing Republican politician, he ran to the left in his first bid for office in 1994, tacked to the right when he briefly thought his political future might be in Utah, returned to the center for his 2002 gubernatorial campaign in Massachusetts, then moved sharply to the right when he gave up on winning a second term as governor and turned his attention to the national GOP stage. Romney has undergone the most fundamental ideological transformation of any top-tier Republican presidential candidate since Bush 41.

The good news for Romney is that Bush was able to win over the right, even if this required some transparent and even humiliating maneuvering -- like his effort to court the Christian right by identifying himself as a"born-again" Episcopalian, or when he was forced to show up and smile through a Washington dinner held in honor of William Loeb, the arch-conservative Manchester Union Leader who'd heaped endless scorn on him during the '80 campaign. Three candidates (Jack Kemp, Pat Robertson and Pete du Pont) attacked Bush from the right in the '88 GOP primaries, but besides a scare in Iowa, he secured the nomination with relative ease. The right was willing to give him the benefit of the doubt.

The bad news for Romney is that Bush's term made it less likely that the party's base would give a perceived apostate the benefit of the doubt again. As president, Bush cast off the ideological purity that had marked his campaign and embraced a pragmatic governing style, culminating in his 1990 decision to renege on his "Read my lips!" pledge and join Democrats in a tax hike deal. That compromise prompted a revolt from congressional conservatives led by a rising star named Newt Gingrich. Bush ultimately got his way, but when the early '90s recession sunk his reelection bid the right declared it definitive proof that tax increases wreck the economy -- and the careers of politicians who support them.

This was the moment anti-tax absolutism became the top-to-bottom philosophy of the Republican Party, with pragmatists calculating that it would be too risky politically to buck the true-believers. When in 1993 Bill Clinton proposed increasing taxes on the top 1.8 percent of income-earners in order to fight the deficit, every single Republican in the House and Senate voted "no" -- a united posture that Republicans have maintained ever since.

And taxes were hardly the only area in which Republicans continued to move right since the Bush 41 years. By 2008, the GOP had become a cohesive, fundamentally conservative party with few remaining moderate voices. Obama's that year victory added a new wrinkle: With the rise of the Tea Party movement, it was no longer enough for Republican candidates just to articulate conservative positions. Now they faced a restive base that believed Obama's victory had been enabled by GOP elected officials abandoning their conservative platforms upon winning office and enacting policies that gave the conservative movement -- and the Republican Party -- a bad name. More than ever today, Republican candidates must prove to their party's base that they really, truly mean every conservative position they utter.

Which explains why about three-quarters of the GOP has been stubbornly resistant to Romney, despite the weakness of his opponents and his supposed inevitability. It's not that Republican voters don't like him. It's just that they've seen his act before -- and they know how it turned out.