Despite rising international pressure, Merkel refuses to allow the ECB to act as the lender of last resort 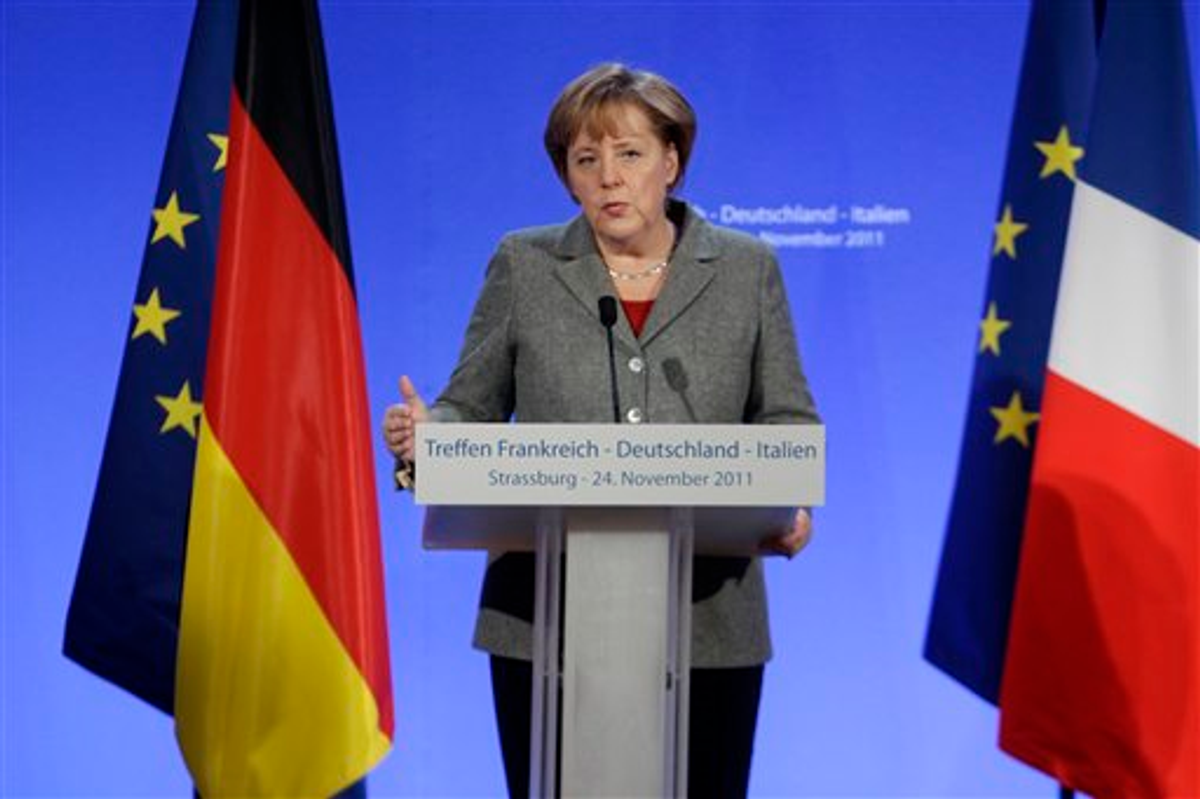 BERLIN, Germany — With the debt conflagration now blazing across Europe’s borders, the world is urging the euro zone’s leaders to staunch it by unleashing the powers of the European Central Bank.

Many European leaders are advocating this as well. The problem: Germany is resolutely opposed to this.

The stakes could hardly be much higher. Forget about tiny Greece, Portugal and Ireland. Italy, the zone’s third largest economy, owes $2.55 trillion. It will have to refinance a staggering $530 billion next year alone, and investors are currently demanding unsustainable rates, in excess of 7 percent. Meanwhile, France’s interest rates are rising, and ratings agencies are threatening its AAA status. Even Germany — the continent’s economic powerhouse — is having trouble financing itself.

Fear is mounting that Europe’s debt crisis could rage out of control, ultimately causing the breakup of the currency union or worse.

The most surefire solution would be for the ECB to declare that it would act as a lender of last resort. That option would require a change in the bank’s charter, but it wouldn’t even demand taxpayer money, given that the central bank can simply print it.

In a dramatic speech, Polish Foreign Minister Radosław Sikorski virtually implored Chancellor Angela Merkel to act. “I fear German power less than I am beginning to fear German inactivity,” he said in Berlin on Monday. “You have become Europe’s indispensable nation. You must not fail to lead.”

Despite this rising chorus of pleas, Germany still says “nein” to using the ECB. (The country is also rejecting another powerful option, of issuing euro bonds that would pool the zone’s credit rating, reducing costs for the highly-indebted nations that are straining the continent, but increasing the cost for more fiscally-disciplined countries.)

So is Germany’s refusal really absurd, as The Times suggests? What exactly are its leaders thinking?

Analysts say that firing up the ECB’s printing presses to solve the crisis is something that goes deeply against the grain here. Instead Germany has been pushing austerity on indebted countries and calling for closer coordination of the euro zone’s spending and budget policies and tough sanctions on those who break the rules.

Some experts say Chancellor Angela Merkel is simply playing hardball, holding out on the issues of the ECB and eurobonds in exchange for concessions.

“Mrs. Merkel’s position has been to use the pressure that is exerted by the markets to help push countries that have budget or generally public finance problems towards a much stronger reform drive,” said Timo Klein, senior economist with IHS Global Insight. He adds that she is using that same pressure to try to make changes in the EU treaties to allow for greater budget supervision. “Obviously this is a high risk strategy,” he adds.

But Berlin also disagrees with its foreign detractors regarding the wisdom of using the ECB as a lender of last resort. “If this were to be seen as a standard procedure in future — that the ECB would be obliged to buy up large quantities of government bonds — then that is nothing else than monetizing that debt, and then before long you will have noticeable increases in inflation,” Klein said. (Printing currency essentially means that more money is chasing the same goods, which drives up prices.)

Inflation is profoundly worrying to Germans, due to the traumatic experience of hyperinflation in the early 1920s, when the personal assets of the majority of the population were wiped out. “That fear is so deeply ingrained, almost 90 years on, this is still very much present on people’s minds,” Klein said.

“Germans are probably more inflation averse then people in other countries,” said Sebastian Dullien, professor of international economics at Berlin’s HTW University. But he adds that they have become more concerned with inflation recently than they were between World War II and reunification, even though inflation was actually higher then. One possible explanation, he says, is that wages have stagnated in Germany, meaning that even slight inflation eats into people’s spending power more.

Moreover, where other see a necessary bailout, Germans see a handout to countries that are living beyond their means. They regard this as letting them off the hook for their profligate ways. Berlin is convinced that only by imposing stringent sanctions on these debt sinners will they enact reforms. It also sees this as the best way to win back market confidence.

This is a view many German economists share. “In Germany there is this feeling that if you just cut spending strongly enough then confidence will return and you will have more investment,” Dullien said. He points out, however, that market panics show that financial markets are not always efficient and don’t always process information adequately.

Nevertheless the thinking in Germany is that inflationary policies are wrong-headed in that they might cover up the cracks but don’t address the real issues.

“The use of the ECB will not solve this problem in the long term,” said Matthias Kullas, of the Center for European Policy, a conservative think tank based in Freiburg. “It can only buy time. The basic problem is that the euro zone is a suboptimal currency union, in which the states’ competiveness differs so widely.” That breeds imbalances that inevitably lead some countries to become indebted.

The German government, Kullas argues, wants to make sure that Europe gains the power to supervise budgets before it resorts to the ECB or eurobonds. “If the ECB is used before that is agreed, then many states would quickly give up their efforts to reform.”

The government also knows that it will have to wrest concessions at the forthcoming December 9 summit in order to placate voters back home. The bailouts have been deeply unpopular among Germans, who see their taxes flowing to others less disciplined than themselves. Indeed, at times Merkel has seemed paralyzed by the prospect that the electorate will punish her for throwing German taxpayers money at the problem.

“Merkel [has] always acted tactically in this crisis,” said Dullien. “She always tried to do what was most popular but she didn’t have a strategy and didn’t know where she actually wanted to end up.”

It is certainly true that Merkel has not effectively explained to her citizens what is at stake. “The story might have been different,” Dullien argued, “if she had stepped up and said: ‘The euro is vital to German national economic interest. It’s not out of altruism that we are doing it. It’s just because we are [heavily] export-dependent — this is what we need to do.’”

In fact German businesses are becoming increasingly uneasy at the way the crisis is dragging on. “It is important that the euro crisis be solved as quickly as possible,” says Anton Börner, president of BGA, Germany’s leading exporters association. “Not just for Germany but for the whole world. This uncertainty is very difficult to cope with and cannot be allowed to continue. Uncertainty is always bad for business.”

Nevertheless, while from the outside Merkel seems to be dragging her feet in the crisis, for many in Germany she has already gone too far. “She is clearly caught in a dilemma between domestic political demands and foreign calls on her,” Klein added. “That is a very difficult position, and she’s trying to muddle her way through.”

Analysts are convinced that in the end Merkel and the other leaders will come to some kind of compromise agreement. “I think the fear of a euro zone break up is simply too great,” Kullas says. “No one will want to be responsible for that.”