Why the Muslim Brotherhood wins

Party denies plans for an "Islamist" government after gaining in first round of elections. 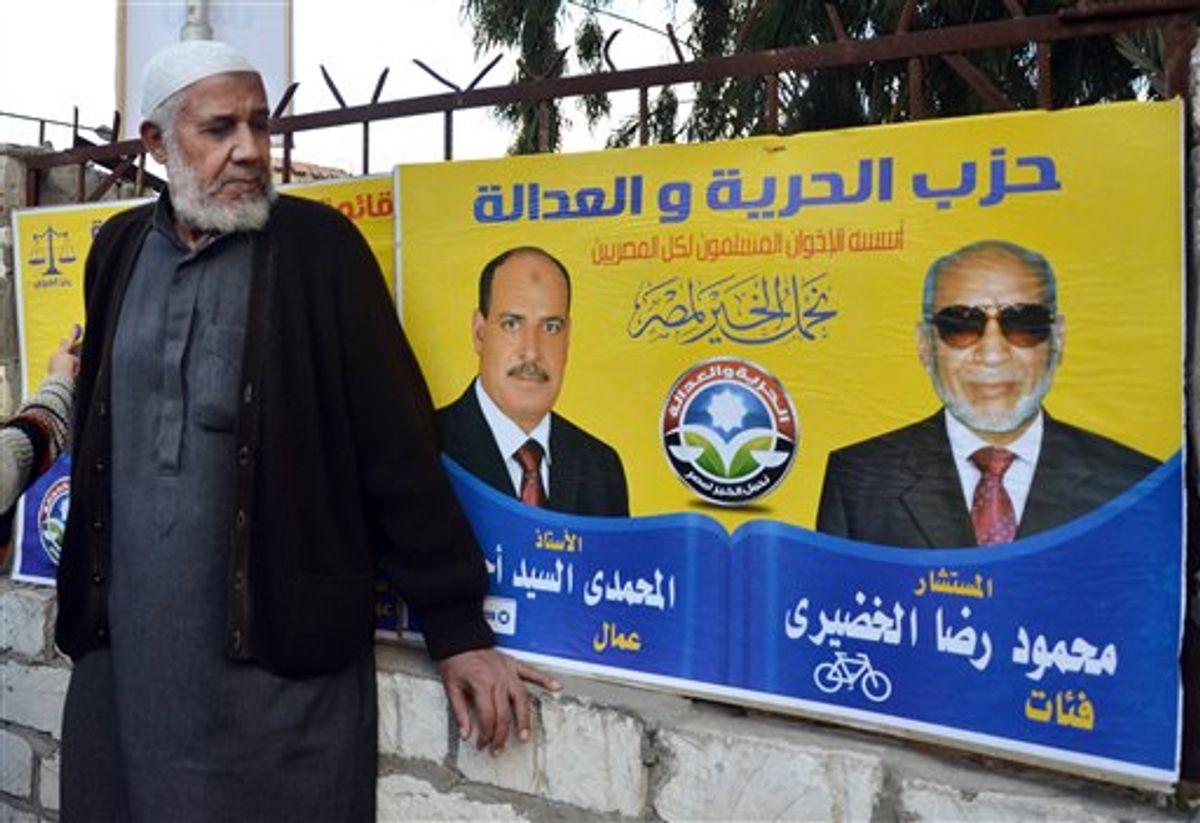 Campaign banner in Arabic for The Freedom and Justice party. (AP/Tarek Fawzy)
--

The Freedom and Justice Party (FJP), the political arm of Egypt’s Muslim Brotherhood is exceeding already high expectations in the first of Egypt’s three-round parliamentary elections.  Although opinion polls had predicated the MB support at 20-30 percent, initial returns indicate that the FJP and its allies may win over 40 percent of seats, depending on the outcome of runoffs.

Many attribute this bump to the Brotherhood’s impressive ground-game.  “Each Muslim Brotherhood member signs on to a rigorous educational curriculum and is part of something called an usra, or family, which meets weekly,”  explains Shadi Hamid  Director of Research at the Brookings Doha Center, “If a Brother chooses to stay home on election day, other Brothers will know.”

But the FJP’s initial success cannot be explained by logistics alone.  The 90-year old organization has deep roots in Egyptian society and its vaguely centrist ideology--a mix of free-market liberalism and moderate social conservatism--appeals to a wide swath of the Egyptian public.  In an election where many party lists include former members of Mubarak regime, the FJP boasts strong anti-regime bona fides. Many of its leaders have spent significant time in prison and are widely respected across the Egyptian political spectrum.

Although there has been an explosion of new political parties since the fall of Mubarak last spring, elections returns suggest these new parties still lag far behind the FJP in name recognition and organizational strength.

With results still coming in, I asked Dr. Amr Derrag, who sits on the FJP’s Supreme Committee, if he were pleased with his party’s performance: “We don’t pay attention to how many seats we score, as much as we pay attention to the success of the process itself,” he replied coyly.  “We need to wait till the final round, to make any assessment.”

But when pressed, he admitted that the strong performance might motivate the FJP to seek a parliamentary majority in the next round of elections. For now, the Secretary General of the FJP, Mohamed Saad El-Katatn,  has pledged that it will only seek a plurality of seats in Egypt’s first post-Mubarak legislature.

Despite, Derrag’s blasé attitude, the FJP is doing so well that they appear competitive in some places secular-liberal parties had counted on winning. In Cairo’s 6th district, which includes the liberal upper-class island of Zamalek and much of the heart of downtown, the FJP’s candidates are making a strong showing.  The district hosted one of the most watched races in town between the well known former television reporter and activist Gameela Ismail, Amr Khaled of the FJP and Mohamed Abu-Hamed of the Egyptian Bloc, a centrist coalition of secular liberal parties.

Despite widespread name recognition, and an unparalleled advertising campaign, Ismail was knocked out of the race.  Khaled will face Abu-Hamed in a runoff in the coming weeks.

On Nubar St., near the edge of the 6th district, the neighborhood is abuzz with election talk, and many of the locals are surprised at the Brothers’ strong showing in their neighborhood.

“I voted for the Egyptian Block,” Ahmed, a 20-year-old university student tells me.   “I would vote for Ismail as well, but I don’t approve of how the Brothers mix religion and politics, ” he adds.

The majority of this week’s voters, however, do not share Ahmed’s aversion to political Islam. The Salafi Nour Party, a fundamentalist Islamic party, is coming in a strong second to the FJP.   The Nour Party has done especially well outside of Cairo and quite a few of its candidates are headed towards runoff elections.

Between the Nour and the FJP, Islamic parties won a clear majority of seats in Egypt’s first round of elections.  Based on this trend up to 65 percent of  Egypt’s incoming parliament could be controlled by Islamists, according to  Diaa Rashwan, the head of the Ahram Centre for Political and Strategic Studies here in Cairo.

But the Brotherhood has made it clear that it will not enter into a religiously based alliance. “We will be part of a democratic coalition including all currents,” Dr. Derrag explained to me.

Saad El Katatny,the  FJP’s Secretary General,  reiterated this point in a statement released Thursday, which denies rumors that  the Brothers were considering an alliance with the Nour Party to form an "Islamist government."

From Opposition Group to Political Party

As elections continue over the coming months, it is unclear how smoothly the Brotherhood can transition from an opposition movement to a political party with a (growing) popular mandate. This dilemma is only exacerbated by Egypt’s uncertain political climate and the continued political dominance of the ruling military junta, the Supreme Council of the Armed Forces (SCAF).

During the election season, the Muslim Brotherhood had struck a conciliatory posture in dealing with the SCAF. Though FJP and Brotherhood leaders criticized the military’s authoritarian ruling style, they refused to join protests last week calling for the immediate removal of the military government.

Over the last months, the Brothers have criticized the proliferation of military trials, condemned police brutality, and publically demonstrated against the SCAF’s attempts to influence the constitutional drafting process.  But they have not adopted the rhetoric of those activists occupying Tahrir Square who declare the military completely illegitimate.

As the Brother’s build momentum, they may be headed on a collision course with the increasingly authoritarian SCAF.  In the few days following the election, the Brothers are already struggling to balance their popular mandate with the political realities of military rule.

On Thursday, the FJP rescinded a statement made by party leader Mohammad Morsi that the party had earned the right to form a new government and interim cabinet. Party leaders later called the announcement, “premature.” The SCAF currently claims the right to name and dismiss the civilian cabinet. The Generals have signaled their intent to retain this power even after the new parliament is seated. Unless the FJP is prepared to serve as the SCAF’s rubber stamp, a showdown is inevitable.

For now, though, FJP officials are focusing on elections.

“Lets not get ahead of ourselves, we have two more rounds of elections to compete in, ” Dr. Derrag tols me.  He refused to comment on potential friction with the military, but he did promise that the FJP would guarantee that the democratic process unfolds properly:   “What we can assure everyone, at the end of the process the will of the people must be respected.”