Famous face behind a tiny project

In a Salon exclusive, the actor discusses his art-based social network, its new book and the inspiration of Occupy 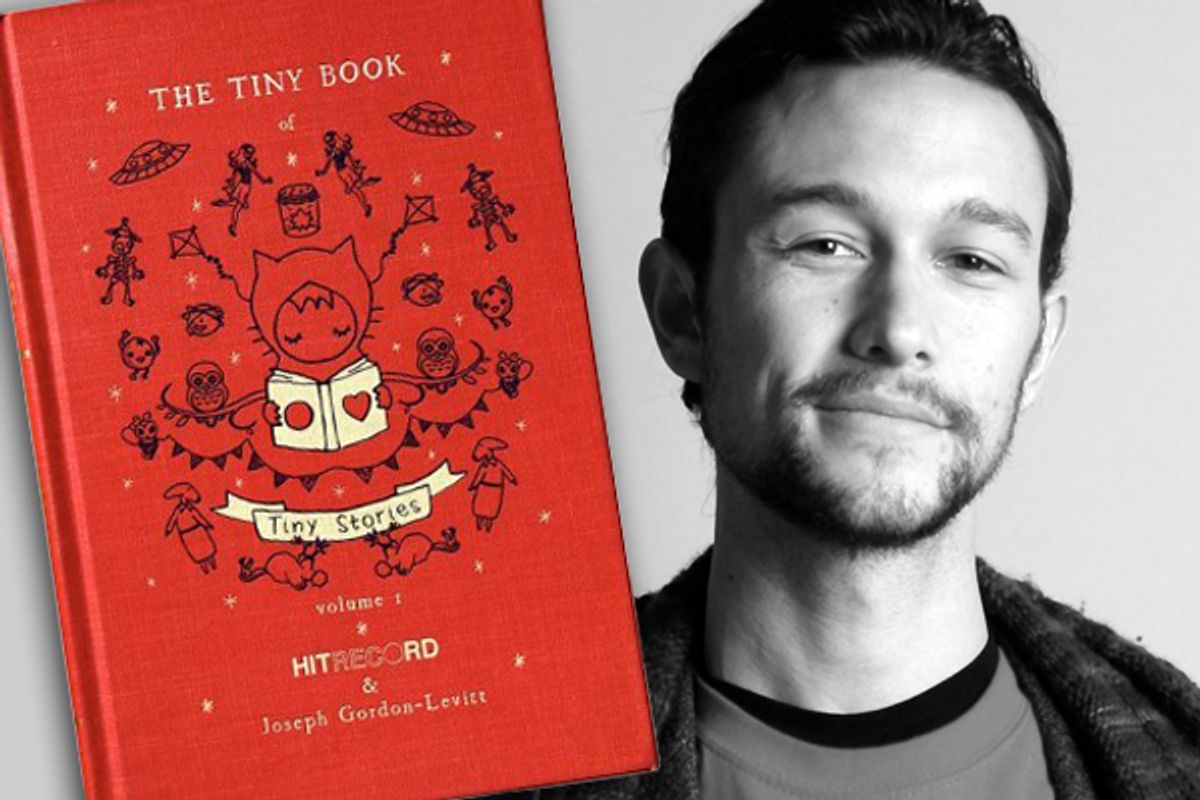 What began as a personal project -- an online screening room where actor Joseph Gordon-Levitt could share the fruits of his creative labors with the public -- has, over the past few years, morphed into an impressive, interactive online salon.

HitRECord.org, where tens of thousands of contributors now bring their original music, text, illustrations and footage, lets people really "share" their work -- not in the YouTube sense of simply posting something and hoping for an enthusiastic response, but in the true spirit of collaboration. Work posted to the site is regularly adapted or "remixed" by other users. Next week, a new book from HarperCollins's It Books -- "The Tiny Book of Tiny Stories" -- collects some of the best pieces.

When he's not working on a movie (you know, small films like "The Dark Knight Rises" and "Lincoln"), the actor still posts material to the site himself --including several hours of raw footage from his visit to Occupy Wall Street on the mid-November night when protesters were evicted from Zuccotti Park.

Over the phone, Gordon-Levitt talked to Salon about the origins of hitRECord, the joys of editing and his high hopes for an OWS-inspired project in the near future.

Can you talk a little bit about the inspiration for hitRECord -- how it started, and whether you ever expected it to grow into what it is now?

Well, it started a long time ago, and no -- when it started, I really, to be honest, did not expect it to become what it has. It started as my own kind of moniker for my own self-expression, when I was making little videos and doing bits of writing and music and just kind of acknowledging to myself, when I was in my early 20s, that as much as I really loved being an actor, that wasn't all I wanted to do.

HitRECord was this web site where I would put up these little things that I made, and over the years this community sprouted up around it. After a while, I sort of said, why not -- rather than all these people just talking about the things that I've made, what if we started making things together? And it actually started going really well -- and so it very, very gradually and organically grew, and then at the top of 2010, we started it as a professional production company. And we've been going strong since.

In a 2007 interview with Salon's Andrew O'Hehir, you called hitRECord an "alternative outlet" where you could "be a little less professional and just freak out a little bit." Is it less of that now that it's a bigger project? Can you still relax as much?

That's really a very interesting question. That's hilarious! Back in 2007, not a lot of reporters were asking me about hitRECord. But you're 100 percent right, actually. In 2007, it was very informal. And now it has become quite a bit more professional.

Personally, I enjoy that. If I'm hanging out with my friends and we're just making something for fun, I'm the guy who's like, "It's not done! Put your drink down! We have to finish this!" I don't know if it's because I'm a workaholic, or just because that's what gets me off -- making something good -- but the fact that hitRECord is more professional hasn't really changed any of its [appeal]. I'm still doing it for the same reasons; it's not like now it's a subdivision of some larger corporation and I have bosses that I have to answer to or anything like that. It's still what I love to do, the things I love to make -- it's just that now I'm doing it on a much grander scale, with a lot more people.

You posted some videos from Occupy Wall Street a couple of weeks ago; in some of the footage, you were interviewing people you met on the street. Do you enjoy the fact that this project lets you be on the other side of the camera -- not only as a director and artist, but also almost as a journalist?

Yeah! Very much so. I'm of the opinion that the news and show business are basically two different genres of the same thing. Whenever I watch the news, or a documentary -- to me, it's all someone telling a story.

I was really inspired going down there to Occupy. And I'm really excited about what hitRECord and I will make together [about Occupy]. My footage is just three hours of footage from one night. But since I posted that, there's been a ton of different contributions; people putting up their footage, writing out their thoughts -- and then people downloading the footage that's up there, and cutting it together in different ways to say different things. It's really just begun. ... We haven't made anything yet that I would consider finished and screenable, but soon we will. And I love it.

All the hitRECord contributors whose work was selected for this book will be paid a cut of its earnings. Do you think other content-sharing websites tend to undervalue talent by encouraging people to post their work online for free?

Yeah, that's interesting. I mean, first of all, 8,000-some people contributed to the "Tiny Stories" collaboration, and I think 60 of those artists have work that's featured in the book. So it's not like we're paying everybody who contributed -- we're only paying people whose work ended up in the final book that's making money. But what I find really kind of touching, actually, is that when we do pay people, they tend to be way more excited about just the concept of getting paid, and getting to be in the credits, than the money itself.

Would you say that's true of you, too, as an artist?

Me, I mean -- I'm lucky. I was on a hit sitcom for years, so I made money. [That's] honestly been a luxury that's afforded me the opportunity to do all sorts of work in my life, as an actor and on hitRECord. I was able to do movies like "Mysterious Skin" and "Brick" and "Manic" in my early 20s -- movies that don't really pay very much money -- because I had made money on TV, just to be honest. And those are movies that, because I was able to do  them, got me jobs in the future. I guess the reason I'm bringing that up is, I wouldn't be so naive as to say that money doesn't matter. It costs money to make a movie. It costs money to publish a book. That's why hitRECord is a for-profit company in the first place. Back in 2007, when your colleague asked me that question, hitRECord was nothing like that -- there was no money at all. And I thought long and hard about bringing money into the equation. The reason that I ultimately decided to do it was that I wanted to do things like this: I wanted to publish books. I wanted to have shows in big theaters. I wanted to eventually make TV shows and feature films. And to do those things, money is necessarily going to be part of the equation. That's why hitRECord is a for-profit company. But I think ultimately, the reason why anybody who's on hitRECord contributes their work to hitRECord is not to make money, but because they love doing it.

Where did the "tiny stories" idea come from to begin with?

The idea came from this artist named "wirrow," who joined the site in the spring of 2010. He's a really wonderful, virtuosic illustrator, writer, musician and animator, and he's done a bunch of great work on hitRECord. He started this collaboration called "Tiny Stories"; he said he got that concept first in a bar, when he wrote a story on a beer coaster, and left it there for someone to find.

He started posting little illustrated tiny stories on our site, and people just really liked doing [their own] -- it's sort of perfectly conducive to our collective, creative process.

Would you say you have a strong editorial presence on the site, and in this book? Do you read or see most of the things people post every day?

I spend quite a bit of time on hitRECord, but there's absolutely no way I could read everything. There are a thousand new records a day right now. It truly is a collaborative effort, and a communal effort. I didn't see all 8,000 "Tiny Stories" entries, for sure -- but the community kind of goes through them, and the things that resonate with the community pop out, whether that's because several people recommended them by hitting the heart button, or because several people "remixed" them.

Now and then I'll find one that I like; oftentimes I'll tweak it a little bit, rewrite it some, which is really fun for me -- I get a big kick out of that kind of game, the challenge that comes with thinking: Here's a cool idea for a story; how can I change these words around (if it needs it) to make it as brief and as graceful as possible?

What's your dream for this project -- in five, 10 years? Will you stay involved? Do you have an ultimate goal, or are you just enjoying the ride for now?

It's both. I have lots of very ambitious goals. We've been touring around, doing live shows; that's really grown in the past year. Last year we played at a 100-person capacity bar in downtown Manhattan; this year, we played a 2,000-seat theater in L.A.

I think eventually we could accomplish any number of things. I think we could have a TV show; I think we could make feature films. And most importantly, I just think that the further hitRECord is out there, and the more artists that want to contribute to it -- the better the work will be. I'm excited to see what we're making together in five years.

To contribute your own work to the hitRECord community, make a profile here.