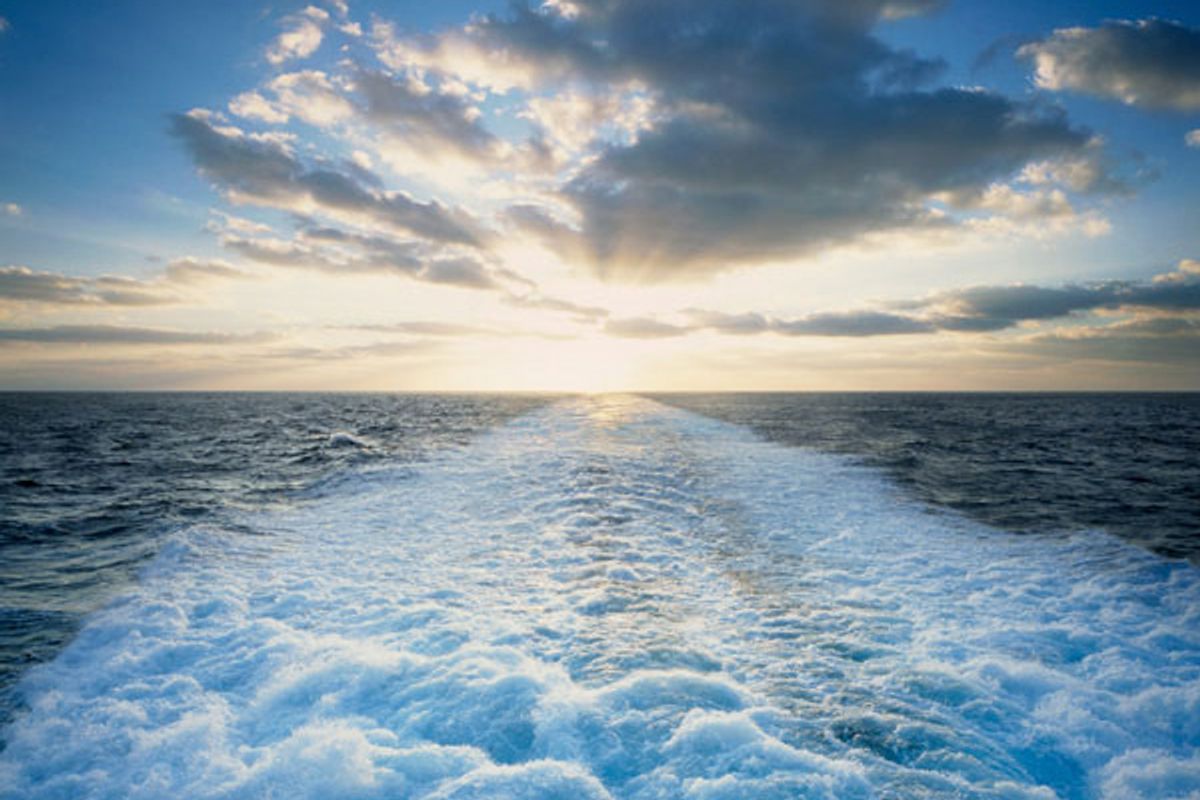 How can artists illustrate the most pressing social, cultural and political questions of the day -- and how can they make their work more probing, more complex and more relevant than the split-second, establishment news coverage that reigns supreme?

A new exhibition at the San Francisco Art Institute explores this thorny question -- and many others -- through the work of two photographers and videographers who "[fuse] the role of the documentarian with the new role of the artist as global citizen."

Allan Sekula seeks to put a human face on modern globalization, exposing the harsh realities of working-class life on the "forgotten landscape" of the high seas -- "one of the most precarious and exploitative systems of neoliberalism." Bruno Serralongue is drawn to a different element -- fire -- in his quest to document the birth pangs of countries like Kosovo and South Sudan and capture the tenor of strikes, rebellions and social tension internationally.

Over the phone, Sekula and Serralongue -- along with curator Hou Hanru -- discussed their work and the artistic convictions it represents. See the accompanying slide show for a quick exhibition preview.

What's the philosophy behind this exhibition? It seems very timely, in light of recent events at home (the Occupy movement) and abroad (the Arab Spring revolutions) -- but it must have been planned relatively far in advance.

Hou Hanru: It's an interesting coincidence -- but not really a coincidence. I've been quite interested in exploring the role of artists in the changing world today. For the last few years, we've had this program called the New Models of Culture and Art Production, which explores alternative initiatives in terms of negotiating different models of production in the context of globalization.

I was very impressed by Allan's recent work, and also I saw a wonderful show by Bruno in Paris last year. I decided to propose this project to both artists -- for them to come together, with their individual works, and create this interesting momentum. (Allan and Bruno have known each other for the past few years, but this is the first time that they are exhibiting together.)

The artworks cannot be innocent or insensible to what's happening around us. And people like Allan and Bruno -- they're not simply reacting to this moment; it's really been a long-term engagement on their part to explore the historical reasons why we are here, at this [point of] crisis.

When it comes to documenting these sorts of stories and events, how is an artist's work different from that of a photojournalist or paparazzo?

HH: My personal interest is in the very subtle distinction between journalism -- the media -- and the artistic approach, [which] I would say is more like that of a researcher trying to show the complex historical background and conditions that make up a particular event. I think that's where the artist actually has a role to play. [The distinction between an artist and a journalist] is really important, even though sometimes it's not easily perceived at first glance by the public. But making an exhibition showing the whole system of image research and production can actually show this invisible aspect that makes up the substance of our work -- the position of an artist's engagement.

Bruno Serralongue: I think Allan and I are experimenting with another way of making photos -- even if the subjects cross the interests of the paparazzi. We are not only interested in the photo, but also the process [of getting it].

Allan Sekula: I think one difference is that artists -- if we use the term "artist" in a way that isn't an honorific (we're not saying that we're more creative than journalists) -- more readily call the formulas of representation into question. That's more at the forefront of what we're interested in. When Bruno uses a 4x5 camera to photograph political events, he's using a technique more traditionally associated with landscape photography or architectural photography to show these fleeting political moments which have pretty much conventionally been shown by means of small-camera images (because those cameras are quick and portable). He's also not doing it electronically; the whole point of his photos is not that they can be uploaded immediately to a home newspaper or a website -- but that they give a slower, more deliberate take on things.

The one thing I would say to slightly amend what Bruno and Hanru have said is that journalism is also in flux -- and it's important to understand that journalists have their own struggles [to survive] in a media environment that's changing and brutal but also has certain openings and promises. I always think of the journalists I admire, because -- whether it's George Orwell or Ryszard Kapuściński -- these are all people who didn't fit the norm of their professions, [but] were able to work in it. We're all working with nonfiction, and we're all working with contemporary events, and we're trying to figure out nonformulaic ways of looking at these events. For me, part of that is reorienting the point of view: Changing the point of view from the land to the sea is a crucial thing for me.

Why did you decide to focus on sea-related stories? And Bruno, how did you settle on the idea of campfires (and fire more generally)?

AS: If we think of our economic problems, not so much in a terrestrial way, but in terms of this watery planet we live on ... What happens when we treat the ocean as if it were a giant interstate highway system, without rest stops? (Why doesn't it have rest stops? Because the whole sea is a toilet -- right?) There are a whole bunch of consequences that follow from instrumentalizing the environment in this way, and obviously it's not sustainable. Also, there are consequences from treating it as a place where you can just exploit the hell out of people because there are no sovereign, national laws that apply, in terms of working conditions and the like. So it's a kind of hidden space of exploitation.

The prevailing fantasy [right now], of course, is that everything's moving at this electronic pace, and that's what sets the standard for the world. But the fact is that there's all this heavy stuff moving around slowly that provides both the material energy and the physical objects that are produced by the use of that material energy. So those are some of the concerns.

What interested me is that, historically speaking, the sea was a place where -- in the 16th through the 18th centuries -- there was this enormous exploitation; these were the most modern machines in the world, and they were like factories. The sailing ship was a kind of engine of colonial conquest, and it also ground down the people who worked on it. But out of that came certain dreams of freedom. Going back to the mutinies in the British fleet at the end of the 18th century -- roughly, say, at the time of the French Revolution -- [we see that the] idea of mutiny and of maritime revolt is a really strong one in the formation of democracy. And ... abolitionist ideas were also circulated among seafaring workers. There are historians who have worked on this: Marcus Rediker and Peter Linebaugh are two who've really done the yeoman's work of exploring this history. What happens in the 20th century, of course, is that seafarers for a brief period of time are recognized as human beings, and accorded labor rights because of their struggles. These are not granted to them from above; they win it by shedding blood, as happened here in San Francisco with the general strike in 1934. But global capital is not content with that solution, especially as it enters into yet a new stage of crisis, and so it wants to return to [its past] exploitation. And it has done so. Seafarers now come from the Philippines, or from China, or from the former Soviet Union, or socialist-bloc countries like Romania, Bulgaria and so on ... That's kind of the framework, for me: What is the cargo container? What does it mean that this box was invented in the '50s that came to be the dominant way of [transporting] dry, semi-manufactured or manufactured goods? It allowed this massive re-localization of production, away from the developed world, to developing countries like China. And shifted, essentially, the global economy in a very profound way. And I think that, in turn, liberated finance capital in the West to just spin in increasingly complex circles of derivative trading and the like -- to lose any sense of connection to the real economy.

BS: For me, just a few words! I'm really interested in conflict; that's what fire means. It's more of a metaphor of the conflict between two sides.

"Oceans and Campfires: Allan Sekula and Bruno Serralongue" is on view at the San Francisco Art Institute through Feb. 18, 2012.