As cycling\'s popularity rises, the cyclists are despised. If riders want to change cities, they need a new attitude 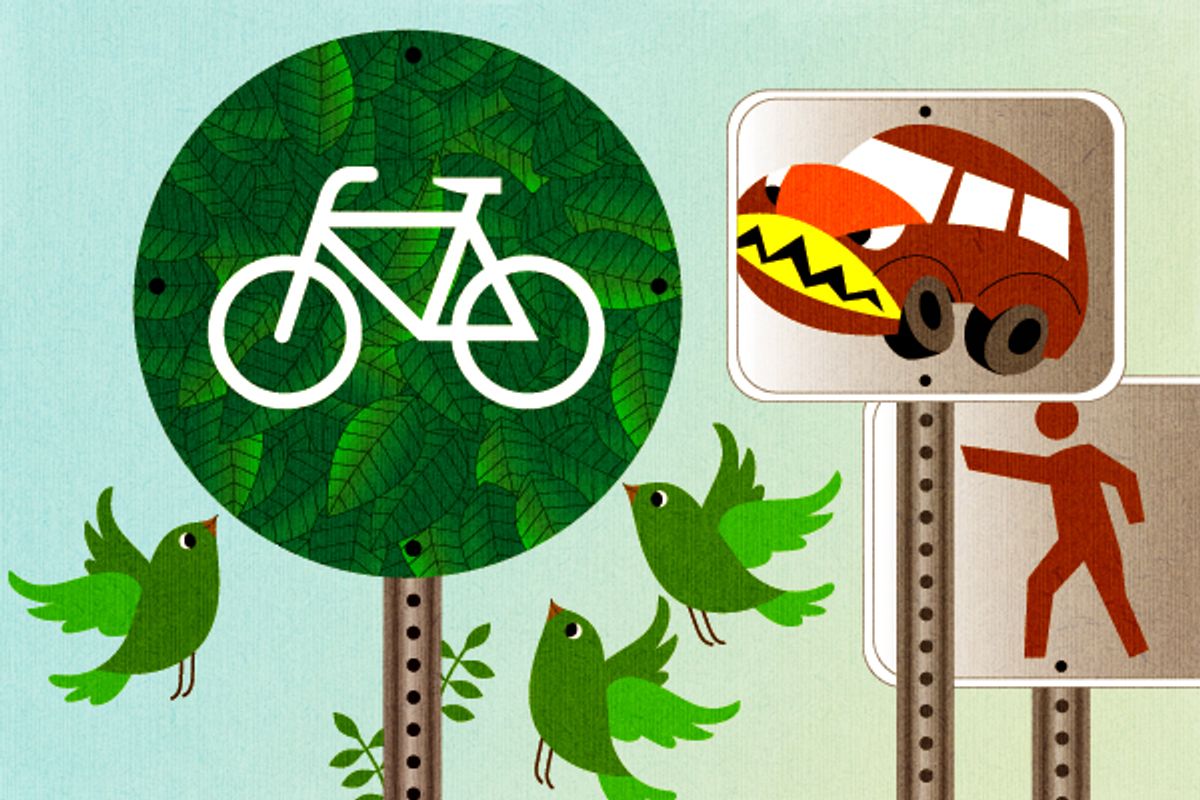 In March, New Yorker columnist John Cassidy blogged about the city's new bike lanes. He was annoyed that they made it harder for him to drive his Jaguar around Manhattan, and bemoaned the city's bicyclists as a privileged, insular aristocracy, a "faddist minority intent on foisting its bipedalist views on a disinterested or actively reluctant populace."

The Internet pounced. Cassidy's blog posts usually get around a dozen comments. This one got 109, and not all were adoring fans. "The most tone-deaf, philistine commentary I've ever seen in these pages," read one. "Honestly, if you love driving so much, please move to the Midwest," another suggested. "Philistine and desultory drivel."

Welcome to the new urban order: the Jag-driving New Yorker columnist is a philistine better suited to the suburbs of Wichita. Meanwhile, the city's bicyclists are an entitled, imperial cabal cruising around on Trek Bellville three-speeds, an insidious locus of unchecked power and influence. How is this possible? As the blog Bike Snob NYC put it, someday in the future, "humanity will marvel that there was once an age in which a mode of transportation as inexpensive and accessible as the bicycle was considered 'elitist.'"

Urban bicyclists have an image problem. They've become stereotyped as pretentious, aloof jackasses, and a lot of this has to do with the changes taking place in cities right now. During the last decade, dozens of urban cores were inundated by young, well-educated newcomers. Places like Philadelphia, Boston, Chicago and Washington added tens of thousands of these new residents. And one thing's for sure: These kids really like bikes. An analysis by Atlantic Cities showed that bicycle ridership in these cities soared during this period. In some cases, it more than doubled.

The rise in bicycling compelled cities to make themselves more friendly to bicyclists, and the friendlier they became, the more people starting riding. But as miles of bike lanes were striped and bike-share systems were installed, some of those cities' residents started to criticize what they saw as major changes being made for a few new arrivals. "It got associated with young people and newcomers, and so people see cycling as something that's accompanied by gentrification," says Ben Fried, editor in chief of the online magazine Streetsblog. Bicycles and bike lanes became the most visible, most concrete representation of the demographic shifts transforming cities -- and all the tensions and growing pains such a transformation entails.

The bicyclists-as-gentrifiers trope turns out to be more perception than reality, though. Over the last decade, the share of white bicyclists fell in proportion to riders of color. And ridership is remarkably equal across income groups. Part of the reason we don't see it this way is because all too often, bike infrastructure gets concentrated in tony areas. Look at a map of a city's bike lanes and bike-share stations and you'll have a perfect guide to the "good" neighborhoods. In many cities, writes Dave Feucht, editor of the bicycling blog Portlandize, "being able to get around by bicycle is seen as elitist because you have to have money in order to live in a part of the city where it's even possible to ride a bicycle."

But design is only part of the image problem. The other is bicyclists themselves, who are viewed as inept at best and a grave threat to the walking public at worst. But this, too, is mainly the result of urban norms not keeping pace with fast-changing cities. For years, most cities let bicyclists operate by what you might call "road rules lite" -- coasting through red lights, for instance, if it was done cautiously. But once bikes started saturating the streets, local residents demanded riders be held to the same legal standards as drivers (ignoring the fact that drivers are rarely held to those standards themselves). Crackdowns ensued, which only inflamed tensions and widened the cultural divide. Philly ticketed 600 bicyclists in two months. The NYPD started citing people on bikes for speeding. A serious debate developed around whether or not bicyclists were assholes. Reporters hit up old ladies for dramatic quotes about being terrorized by reckless riders.

Railing against bikes, in fact, became a great way to sell papers. A hundred years ago, newspapers ginned up scare stories about the threat that hapless women on bicycles posed to pedestrians. Today, old-school tabloids like the New York Post have found that the bicyclists-versus-everyone narrative still resonates. In Op-Eds with titles like "Bike-Lane Bloodbath," bicycles are portrayed as weaponized toys, and isolated accidents are held up as proof that bicycles are an urban menace. Last week in San Francisco, a 23-year-old bicyclist was charged with misdemeanor vehicular manslaughter for striking and killing a pedestrian -- a tragic incident, but one that occurred in a city where 800 pedestrians are hit by cars every year. Still, the story was front-page news, sparking an online uproar: "I'm sick of bicycles and their cocky, self-righteous riders," one commenter wrote on the San Francisco Chronicle's website. "Bicyclists believe that they are untouchable."

Adam Sternbergh argued in the New York Times that there's a whiff of the Tea Party in the anti-bike backlash: "the specter of bureaucracy run amok," in which a subset of society forces lifestyle changes on the majority. When Colorado Republican gubernatorial candidate Dan Maes asserted last year that Denver's efforts to encouraging bicycling "threaten our personal freedoms," true believers knew what he meant: that the Clif Bar-eating car haters want to force others to adopt their carbon-free habits and ride Schwinns to work in a snowstorm.

And it's true: Bicyclists are trying to get others to follow their lead. For one, converting people is necessary for a group that's fighting for road share -- there's strength in a critical mass. But these conversion efforts also seem to confirm what some have always suspected: bicyclists are smug eco-warrior fitness freaks who think they're better than drivers. They're here to show you the light, save you from your sinful internal-combustion-based lifestyle, baptize you with a "One Less Car" water bottle, and usher you down the green path to salvation.

Jeff Mapes, author of "Pedaling Revolution," thinks the smugness factor is almost accidental: "I know a lot of cyclists who say their commute is the best part of their day" -- not exactly the kind of thing that the co-worker who just spent an hour in gridlock wants to hear at the water cooler. And just like "I don't have a TV" guy, those who eschew modern conveniences can rub people the wrong way. In fact, the antipathy toward bicycles resembles the Republican aversion to trains, a form of transport that's older and slower than flying but seen as elitist nonetheless. Like trains, bikes are looked at as a boutique form of transportation that pretentious liberals like because they want to Europeanize our cities.

Like many of today's bicyclists, I started riding when my city striped a bike lane near my apartment. It was the Prospect Park West bike lane, which became ground zero in New York's bike wars. The lane was what made me first realize that biking to work was an option -- I didn't feel forced, but I did feel nudged, as if the city was suggesting that maybe I'd like to give this a whirl. I think this is the true power of bicycle infrastructure: It's an implicit message that bikes are real transportation, and an advertisement for biking that runs right through the city in bright green paint.

Cyclists need to consider themselves part of this ad, too, and we don't always do a good job of it. We demand bike lanes in gentrifying neighborhoods, but don't seem to care if they ever reach the slums. Inconsiderate riding is overhyped by the press, but it also really happens more often than we'd like to admit. And there are smug cyclists who think they know what's best for others -- I know because I've been one of them. If we want to improve the image of urban bicyclists, we need to start with ourselves. If we're successful, the concept of the elitist bicyclist will one day seem as silly as, well, driving in Manhattan.