A fond farewell to the hard-wired phone

From "Superman" to "I Love Lucy," we look back at the role this outdated played in television and film 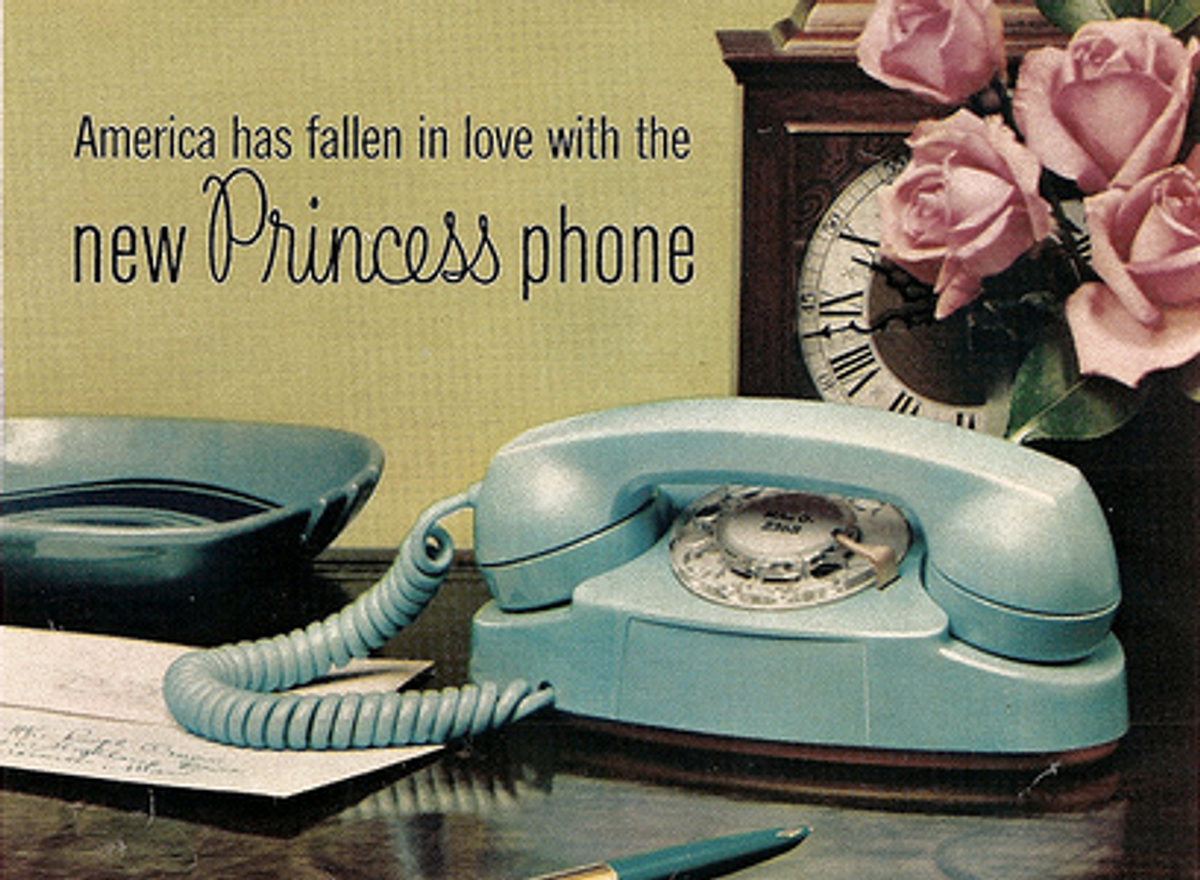 When it comes to using a telephone these days, most people spend more time on a cellular phone than a hard-wired device. Even the phone sets we use that are tethered to an outlet tend to be wireless. Folks are canceling their traditional telephone service in exchange for their cellphone plans. And you can forget pay phones or phone booths -- good luck even trying to find one of those! Makes sense, but it's caused me to reflect on a century of the telephone's history in our culture, and there's no better barometer of our popular culture than film and TV. I spent a lot of time in front of our television set when I was a kid -- I’d often turn it on and watch it as well. TV shows, reruns of programs that aired before I was born, cartoons … This self-imposed saturation also has a lot to do with why I love animation so much. There was even a program that aired on WGN/Ch9 in Chicago every Sunday night called “When Movies Were Movies” that specialized in showing the classic films of the Depression/World War II era. By the time I reached high school I’d become entranced by the 1930s-1940s time period. But while watching TV and especially old movies, I formed an affinity to a regular player beyond the actors -- the humble and ever present telephone.

It was around this time (early 1970s) that I noticed that a lot of the antique stores and junk shops in the Chicago area had old telephones for sale. This was pre-Bell System divestiture, so I don’t really know what to attribute this glut of available vintage equipment to, but it seemed to me to be the ideal time to gobble up these old telephones that I’d come to know so well from the stuff I’d watched on television. As I began to collect these wonderfully simple and gorgeously designed contraptions, I also began to notice differences in the design details. After a while, I could plainly see the chronological transition that the design of any particular phone model followed. I’ve come to realize that this was the foundation for my interest in basic design evolution as well -- future posts will show further evidence of this. When lined up and displayed next to each other, it’s easy to see the evolution of the design and distillation of details – especially by the time industrial designer Henry Dreyfuss (1904-1972) became involved as a Bell Telephone consultant in 1930 and an actual designer for them by the mid-1930s.

Dreyfuss’ work with the Bell System/Western Electric stretched from the debut of his classic 302 desk set in 1937 to the timeless model 500 phone still in production in 1982. In the end, there had been over 161 million Dreyfuss-designed telephone sets produced. What's also interesting to me is how the Western Electric/Bell System/AT&T telephone could exist as both a generic icon and a "product". Because of the monopoly the Bell Telephone Company had over the market, we've got approximately 70 years of documentation in various realms (print, TV, motion pictures, etc.) of a corporation's service. Yes, there were companies like Stromberg-Carlson, Kellogg, GTE, etc., but I think it's hard to argue that Western Electric reigned as anything other than supreme. As a result, even when the use of the telephone wasn't in itself an advertisement, it ended up being one anyway. A very unique set of circumstances indeed...

Here’s a visual timeline of the basic Bell System desk set equipment produced by Western Electric and American Telephone & Telegraph (AT&T). All the telephones photographed against a white sweep (except for the 1980s pay phone ad and the 1932 Model 302 prototype) are a part of my personal collection. It's safe to say that having all these telephones creates an environment that makes it appear as though a regional production of "The Front Page" could break out at any moment...

[caption id="attachment_230623" align="aligncenter" width="460" caption="1925 – A1/AA1 painted deskset with brass base and aluminum cradle holding combined Bakelite transmitter/receiver. This is a transition phone that incorporates elements from both the “Candlestick” and the “Cradle” designs. This is essentially a Candlestick base with a short shaft for the handset holding cradle. In production for a very short time and as a result, a very rare model."]

[caption id="attachment_230620" align="aligncenter" width="460" caption="1937 – 302 H1 is also a transition model and a first of (several) sorts. It’s the first Dreyfuss-designed set to go into production and the first model to incorporate the ringer within the desk set. Prior to this, a separate ringer box had to be installed on a nearby wall. This intro model is made with a metal shell and very heavy. It also utilizes the same basic handset as the previous cradle models – but some introduced the Dreyfuss F1 plastic handset. The ears and contact buttons are smaller than the basic 302 of 1938 and there were air vents inside the handgrip."]

[caption id="attachment_230618" align="aligncenter" width="460" caption="1941 – 302 shell manufactured and molded out of Thermoplastic, saving metal for the war effort and approximately 2 lbs in weight. The use of plastic also offered up wide color options."]

[caption id="attachment_230616" align="aligncenter" width="460" caption="1949 – The Model 500 is the first post-war designed phone and became the icon of American telephones. It served as the foundation for Bell Systems phone design through the 1980s. Also designed by Dreyfuss, it was produced in a rainbow of different colors and would later (1953) incorporate a clear plastic dial, as well as options like a lighted dial and volume controlled handset."]

[caption id="attachment_230614" align="aligncenter" width="460" caption="1963 – 1500 was the “Touch Tone” version of the 500 and could be considered a remuddled version of the classic Dreyfuss design. Initially TT/pushbutton phones came with 10 buttons, and were later changed to 12 including the * and # options."]

[caption id="attachment_230711" align="aligncenter" width="460" caption="Two 320 Model Mine Telephones -- these were provided with insulation that would prevent sparks from igniting natural gas found in mines."]

[caption id="attachment_230716" align="aligncenter" width="460" caption="On the left, a 1947 prototype pushbutton phone which recently sold on eBay for $17,999.99. On the right, a clear plastic version of the 302 model. From this model on, Western Electric manufactured limited editions of most of their models in clear plastic."]

[caption id="attachment_230821" align="aligncenter" width="460" caption="Western Electric started offering models of the their telephones in versions other than black almost from the beginning, but the introduction of plastics after World War II opened all sorts of polychromatic vistas."]

[caption id="attachment_230774" align="aligncenter" width="460" caption="A May 1950 Bell Telephone System instruction booklet for grade schoolers. They were still handing these out in the 1960s."]

Finally, here are some funky examples from the endless library of  instructional films produced for Western Electric/Bell Telephone System/AT&T:

2. How to Dial a Telephone

4. How to Dial your Phone by Bell System

I've found the sites below helpful in answering questions and obtaining parts.

Henry Dreyfuss' 1955 autobiography, "Designing For People" and Russell Flinchum's 1997 Dreyfuss biography are both terrific and great sources for the design enthusiast.

BTW -- I'm fully aware that the picture of Maxwell Smart and Alfred Hitchcock posing with the giant-sized UK telephone prop depict pieces of non-Western Electric equipment. Regardless, it still seemed to fit into the scheme.

Thanks go to the illustrious Corrie Lebens for her help in scanning and organizing all this with me.