How "The Muppets" made Occupy Wall Street

Call it the triumph of Comrade Kermit. Fox Business News rips the lid off a dastardly Communist puppet plot 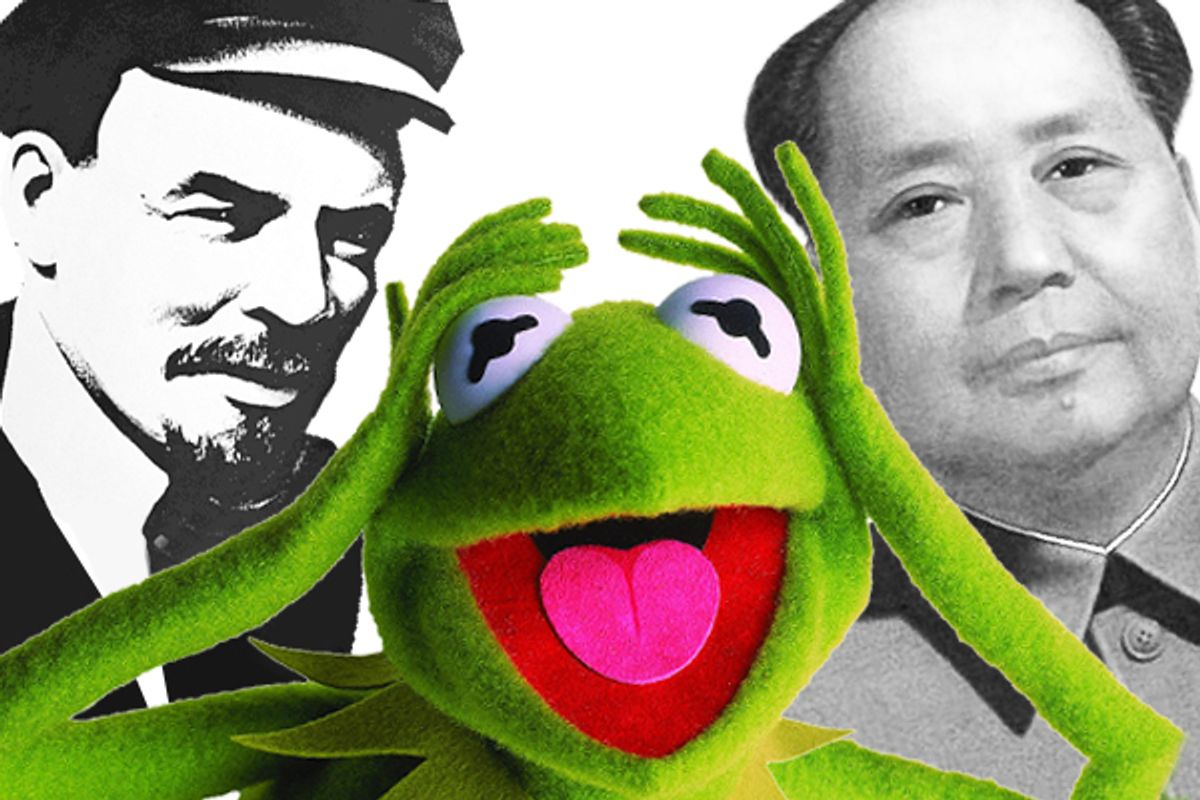 A specter is haunting America: the specter of Communist Muppets!

Don't you dare smile! I just watched, mouth agape, a segment on the Fox Business "Follow the Money" show that definitively exposed the new Muppets movie as yet another example of liberals trying to brainwash your kids against capitalism. And boy, let me tell you, the scales have fallen from my eyes. Rupert Murdoch's boys are on to something! When the evil masterminds behind this film decided to name their oil baron villain "Tex Richman" they were without a doubt shamelessly attempting to undermine everything that is right and true about the United States of America.

Well, duh. Of course! As the Media Research Center's Dan Gainor pointed out during the segment, it is mere child's play to trace the nefarious connections from the Muppet attack on a successful oil executive (c'mon, is Hollywood ever going to have a new idea?) to the Homo sapien-hating philosophy at the heart of "The Matrix" -- the notion that "mankind is a virus on poor old Mother Earth."

"You wonder why we've got a bunch of Occupy Wall Street people wandering around the country?" asked Gainor not so rhetorically. "They've been indoctrinated for years by this kind of stuff."

Yes, that's right, Fox Business just devoted seven minutes of precious airtime to a critique that not only connected "The Matrix" to "The Muppets" (and "Cars 2"! and "Syriana"!), but also reminded us that oil is a good thing because we need it to fuel our ambulances; and threw in a slam at Occupy Wall Street, for good measure. This is a level of brilliance that has heretofore not been regularly associated with this network. But really, I can't tell you how glad I am that someone has finally had the balls to put a stop to this calcified "let's put on a show to save something precious from the nasty job creator" plot nonsense. It may be one of Hollywood's oldest tropes, but that doesn't make it right.

I know some of my readers might actually believe that Texas oil money is largely responsible for destroying the climate of poor old Mother Earth and transforming the U.S. political system into a dysfunctional train wreck. Tut tut. What better evidence do we need to prove that long before Kermit and Miss Piggy turned to the dark side of dialectical materialism, your impressionable little minds were being warped against the free market by "Gilligan's Island" and Bugs Bunny?

Even the most enlightened are not immune! When the Fox segment turned to Andrea Tantaros to discuss the long slide of "Sesame Street" into socialist propaganda, Tantaros lamented herself straight into the self-reeducation camp.

"Why can't liberals leave little kids alone? Why does there have to be a political message. I thought 'Sesame Street' was supposed to be about sharing and being nice to people ..."

Is she even listening to herself?! Sharing is COMMUNIST. That is what Karl Marx was all about! And bottom line, that's all the Occupy Wall Street protesters want. What part of "redistribution of wealth" does Tantaros not understand?

Clearly, the Children's Television Workshop has been insinuating itself into the hearts and minds of our nation's youth from day one. Maybe, just maybe, they've become a little more obvious about it in recent years. But isn't that the kind of thing you'd expect when a vast economic catastrophe that just happens to occur during the the administration of President Tex Richman leaves millions of people unemployed and exacerbates income inequality to its worst point in a century?

Whoops, it looks like the Muppets have gotten to me, too. Insert maniacal laughter here.