Lawmakers from Boehner to Pelosi have been accused of gaming the market. A new bill might do something about it 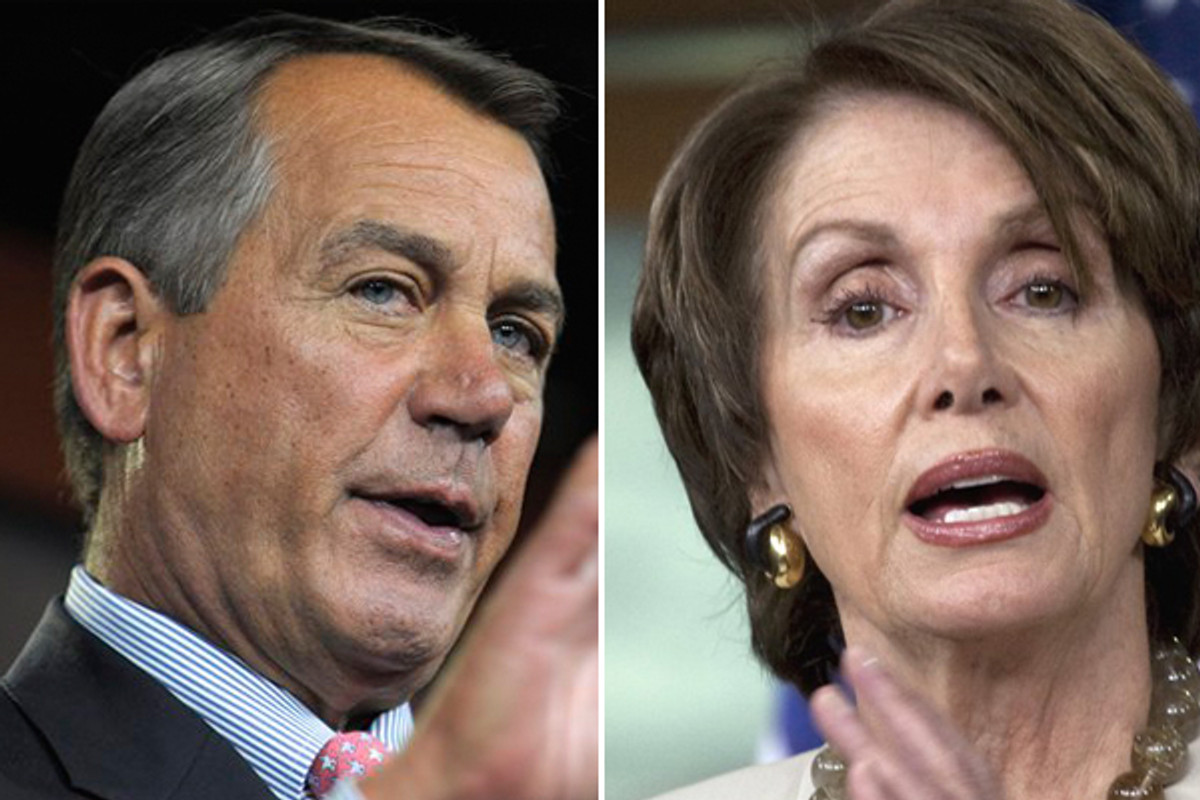 The other day, a couple of kids up in Kingston, N.Y., called 911 looking for Santa Claus. Law enforcement arrived to tell them that what they had done was naughty, not nice, but in deference to the holiday, no pepper spray was involved.

Meanwhile, on Maryland’s Eastern Shore, a guy dressed up like Frosty the Snowman – that jolly, happy soul -- tried to thumpety-thump-thump a cop with the head of his costume. He’s also accused of kicking a police dog – bad, Frosty, bad!

Then, of course, there are those cheery photos from Scottsdale, Ariz., of people – including kids -- posing with Santa at a local gun club, hoisting their choice of machine guns, pistols, semi-automatic AR-15s and grenade launchers. It’s okay, the club says, they’re not loaded, but you better not pout or cry… punk.

Welcome to Christmas in these United States, Anno Domini 2011.

Just in case you thought those three incidents were lacking in the true spirit of the season, last week the investment company PNC Wealth Management issued their annual “True Cost of Christmas” index which reported that purchasing all the items mentioned in “The Twelve Days of Christmas” costs more than ever – $101,119.84, to be precise, up 4.4 percent from last year. The high price of gold sent retail demand plummeting so the cost of the five golden rings actually went down, but seven-swans-a-swimming rose by 12.5 percent. Pipers piping and drummers drumming “saw modest increases, both up 3.0 percent,” but the cost of eight-maids-a-milking, representing the only unskilled labor, remained unchanged -- there was no increase this year in the minimum wage.

Coincidentally, Iowa Sen. Tom Harkin, Democratic chair of the Health, Education, Labor and Pensions Committee, held a press conference on Capitol Hill to announce, “There will be no Christmas for Congress unless there is an extension of unemployment insurance benefits.” He and some of his colleagues declared that they’ll keep the House and Senate from adjourning for the holidays if action isn’t taken.

“I hate to inform my Republican colleagues,” Harkin said, “but Wall Street did not build America. But when it comes to handing out hundreds of millions of dollars, Wall Street is up front. It’s time for middle-class America to be up front.”

Fair enough. But it seems that during all that time it’s been up front, Wall Street also has done all right for our do-nothing Congress (and if you want to know just how do-nothing, a couple of weeks ago, congressional lobbyist Billy Moore told NBC News’ First Read that this Congress “has enacted just 55 public laws so far this year -- and 34 of them merely extended existing laws -- compared with the average over the last 20 years of 148 public laws for a first full session”).

Such idleness comes with its rewards – apparently, many of our members of Congress could afford all of that Twelve Days of Christmas loot without lifting a manicured finger. Last month, the Center for Responsive Politics reported that about 47 percent of Congress – 250 current members – are millionaires, a “lofty financial status enjoyed by only about one percent of Americans.”

What’s more, the Center reports, “members of Congress might be more financially well off than we can see” because their personal financial disclosure forms don’t include government retirement accounts or any non-income generating personal property, including residences, cars and artwork. But we do know about their Wall Street investments:

“The most popular company in which members of Congress were invested in 2010 was General Electric, a company that spent more than $39 million on federal lobbying that year and ranked as the No. 3 top spender on lobbying. Seventy-five different current members of Congress held stock in GE in 2010, according to the Center's research. Collectively, these holdings were worth at least $3.6 million."

Coming in second and third were Procter & Gamble (62 lawmakers hold at least $8.7 million worth) and Bank of America (57 members, $2.8 million). Microsoft ($3.2 million) and Cisco ($1.3 million) were tied for fourth place; stock of each was held by 56 legislators. Fifth place goes to drug giant Pfizer – 51 members held stock worth at least $2 million.

None of this, of course, includes corporate campaign contributions to members, which by all indications will hit dismayingly record heights next year.

"It's no surprise that so many people grumble about lawmakers being out-of-touch," Sheila Krumholz, the Center for Responsive Politics’ executive director, said. "Few Americans enjoy the same financial cushion maintained by most members of Congress -- or the same access to market-altering information that could yield personal financial gains."

But one of the few pieces of good holiday season news coming out of this forsaken Congress is that they may finally be doing something about “access to market-altering information,” the knowledge members pick up via their privileged status and access to congressional testimony, reports, briefings and daily contacts with lobbyists, special interests and government agencies.

Five years ago, the intrepid congresswoman from western New York State, Louise Slaughter, a ranking Democratic member of the House Rules Committee, introduced legislation to prevent insider stock trading by her fellow legislators. According to The Washington Post, “Most lawmakers bristled, offended by the mere suggestion that they would ever engage in such behavior.” She could find but nine sponsors, only one of whom was a Republican – Walter Jones from North Carolina. It was, as the congressional newspaper The Hill reported, “a non-issue.”

And yet, as that paper noted in its December 1 edition, there has been ample evidence that “consciously or not, federal lawmakers use their positions to reap better Wall Street returns than other investors.

“A 2004 study conducted by researchers at Georgia State University, for instance, found that trades made by selected senators between 1993 and 1998 produced returns more than 12 percent higher than the rest of the market. ‘These results,’ the researchers concluded, ‘suggest that senators knew appropriate times to both buy and sell their common stocks.’

“More recently, researchers from four universities found that 300 House lawmakers trading 16,000 times between 1985 and 2001 outperformed the market by roughly 6 percent each year — something the researchers deemed ‘significant positive abnormal returns.’”

But what a difference a visit from 60 Minutes makes. Last month, the newsmagazine broadcast a story based on the book, "Throw Them All Out," by Peter Schweizer, a fellow at the Hoover Institution, the conservative think tank at Stanford University. Their report stated, “Congressional lawmakers have no corporate responsibilities and have long been considered exempt from insider trading laws, even though they have daily access to non-public information and plenty of opportunities to trade on it.”

CBS was critical of both House Speaker John Boehner and Minority Leader Nancy Pelosi (they have denied any wrongdoing), as well as others, but perhaps the most damning evidence was against House Financial Services Committee Chair Spencer Bachus, Republican from Alabama, who just before the 2008 financial meltdown attended closed door briefings with Treasury Secretary Hank Paulson and Federal Reserve Chair Ben Bernanke.

“While Congressman Bachus was publicly trying to keep the economy from cratering,” 60 Minutes reported, “he was privately betting that it would, buying option funds that would go up in value if the market went down. He would make a variety of trades and profited at a time when most Americans were losing their shirts.” According to the broadcast, Bachus made about 200 trades and netted around $28,000. As Peter Schweizer said, “I mean, talk about a stock tip.” (Bachus has said the 60 Minutes piece had “a disturbing number of errors” and that Schweizer’s allegations are “a total lie.”)

Overnight, in the face of public outrage – not to mention a Congressional approval rating seeming to fall more precipitously every day -- Rep. Slaughter’s legislation, the Stop Trading on Congressional Knowledge (STOCK) Act, came off life support and began acquiring sponsors faster than Santa’s sleigh on Christmas Eve. She now has at least 133, including 37 GOP members.

Last Thursday, Sens. Joe Lieberman of Connecticut and Susan Collins of Maine held the first hearings on Senate versions of the legislation. Lieberman hopes to have a bill out of committee by mid-December. House hearings are scheduled to begin this week and the House Ethics Committee has sent a memo to members on the proper use of non-public information.

And all of this isn’t the only holiday cheer spreading across the Potomac. Democratic Sen. Al Franken of Minnesota announced that he and more than half of his fellow senators – 21 Republicans and 37 Democrats – are planning a Secret Santa gift exchange. Franken told The New York Times he thought it “would be a good way to cut through the partisan divide here in the Senate. And who knows, maybe it will create some unlikely friendships.”

The price limit is ten dollars, so no golden rings or partridges in pear trees this year. But the American public will be happy to throw in lumps of coal for free.