Followers forgive his failings and hail his prospects 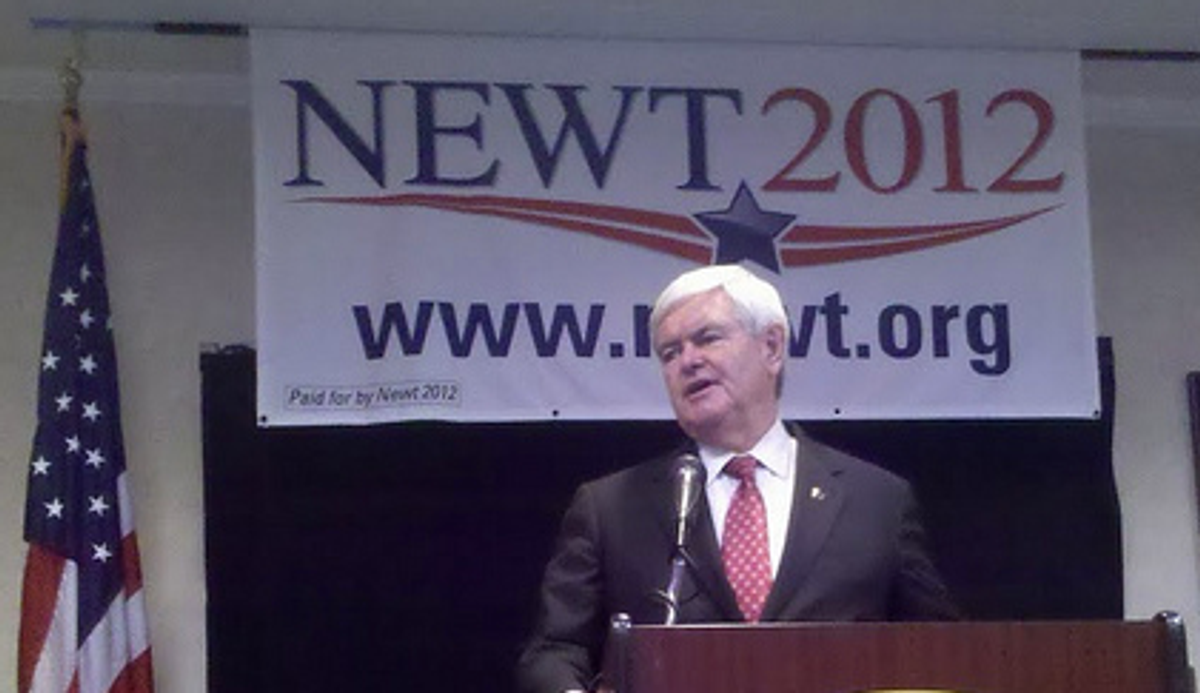 The Staten Island, N.Y., hotel where Republican presidential front-runner Newt Gingrich appeared on Saturday afternoon for a “Tea Party Town Hall” could hardly have been more nondescript. Nestled deep inside a corporate park somewhere in New York City's most bucolic (and conservative) borough, the Hilton Garden Inn looked identical to scores of other hopelessly bland places across America — which didn't stop Gingrich from beginning his speech with praise for the hotel’s artwork. “Very, very impressive,” he told the 600-person crowd, to applause.

The staples of Gingrich’s repertoire -- aggressive rhetoric, intense self-regard, historical pomposity, and organizational chaos -- were on full display. “In his world, the government is sovereign, and we are merely subjects,” Gingrich said of President Obama. “In our world, we are citizens, and the government is our servant.” He even tried his hand at a bit of theology. “All of us are flawed,” Gingrich noted when a journalist asked about his well-documented personal foibles. “The belief that only one person was perfect, and that was Christ” encapsulates “the heart of Christianity,” he affirmed.

Gingrich arrived late, causing reporters to speculate that he’d been watching Herman Cain's withdrawal announcement. Sure enough, when Gingrich finally arrived, he wasted no time in wishing Cain well -- thanking him for contributing “bold ideas” to the campaign, such as the “9-9-9 tax” plan. Before opening the floor to questions, Gingrich veered off to talk about the Middle East, asserting that Obama has failed to adequately curtail Iran’s pursuit of a nuclear weapon, which he said poses a “direct, mortal threat to the very survival of Israel.”

“The Arab Spring may well turn into a hurricane season of grave, grave danger for the United States,” he explained.

One local journalist asked Gingrich to comment on remarks by former GOP Rep. Guy Molinari, who represented Staten Island in Congress during the 1980s. Last week, Molinari called Gingrich “evil,” adding, "the thought that this man could be president of the United States is appalling."

“I have stepped on a lot of toes,” Gingrich conceded. “One of the reasons I left Congress is, I frankly burned out a number of Republicans -- because I pushed so hard for reform,” he said. “I think I represented the spirit of the Tea Party before there was a Tea Party.”

Toward the beginning of his speech, as Gingrich meandered through another castigation of Obama, someone in the crowd abruptly called out “Mic check!" -- the Occupy movement's signature call for attention.

“Occupy Staten Island says ...” this interloper shouted, before being drowned out by the crowd’s angry boos. “Bum!” several sneered. “Don’t worry, Newt -- we got your back!” another man exclaimed. A chant of “Newt! Newt! Newt!” reached full force, and the man was escorted from the room. As he exited, someone slapped a “Newt 2012” sticker on his head.

“As I was saying,” Gingrich continued, “about who I presume was his candidate ...” The crowd roared.

Gingrich did not scant, of course, the historical significance of his candidacy. “This will be the most important election since 1860,” he declared, likening himself to Abraham Lincoln twice over the course of the speech. A position paper recently posted on Newt.org – suggesting that the Federal Court of West Texas ought to be abolished -- constitutes the “boldest” proposal for reforming the American judiciary “since Lincoln’s First Inaugural,” Gingrich proclaimed.

Gingrich touched on disparate themes, at once denouncing "hedonism and acquisition,” and then touting his instrumental role in launching Plan Colombia, the U.S. military’s notorious counter-narcotics interdiction program in South America. He even commented on the notion of holding banks accountable for causing the 2008 financial crisis.

“The idea of any one of us getting the attention of Bank of America is virtually impossible, because they’re so gigantic,” he said. “By the time you get to somebody with any level of power, if it’s not a billion-dollar problem, they can’t afford to pay attention to it.” He said that “too big to fail,” by his lights, means “too big to be managed.”

The man who asked the question then interjected. “I am one of the 99 percent, and I appreciate this dialogue,” he said -- another invocation of the Occupy movement. This time, the crowd cheered. Gingrich nodded.

After the speech, Newt and his wife greeted supporters, signed books and posed for photos with fully uniformed Army soldiers. His fan base proved willing to look past Gingrich’s many faults.

Kevin Collins, a former police officer and Staten Island Tea Party board member, rejected Molinari's criticism of Newt’s character. “Guy didn’t like the treatment that his daughter got from him [Gingrich] when she was in Congress,” Collins said, referring to former GOP Rep. Susan Molinari. “I know Newt Gingrich personally, and I’ve always liked him.”

I asked Frank Santarpia, a real estate investor and co-founder of the Staten Island Tea Party, about some viewpoints Gingrich has espoused only in the past few years that would seem to complicate any bid for support from “Tea Party conservatives” -- namely, his endorsement both of an individual mandate in healthcare and the need to “take action on climate change.” But Santarpia was undeterred. “I am not interested in what happened 25 years ago, 15 years ago, or two years ago,” he said. “Circumstances change, people change.”

Newt’s mixture of blarney and bombast is going over well with Republican voters, especially those whose priority is the complete evisceration of Barack Obama. A Des Moines Register poll released later on Saturday showed Gingrich with the lead in Iowa, at 25 percent -- followed by Ron Paul in second and Mitt Romney in third. The durability of Gingrich’s surging poll numbers remains something of a mystery; he opened his first office in Iowa just a few days ago. (Conversely, Paul’s organization is “very good,” Gingrich told me during the book signing. “He’s very formidable in Iowa.”)

If Republican primary voters in Iowa, New Hampshire and South Carolina are as conciliatory toward Gingrich as they were in Staten Island, the grandeur with which he views his presence in contemporary politics will, no doubt, continue to inflate.