There's a month between now and Iowa for Gingrich to melt down. But if he doesn't... 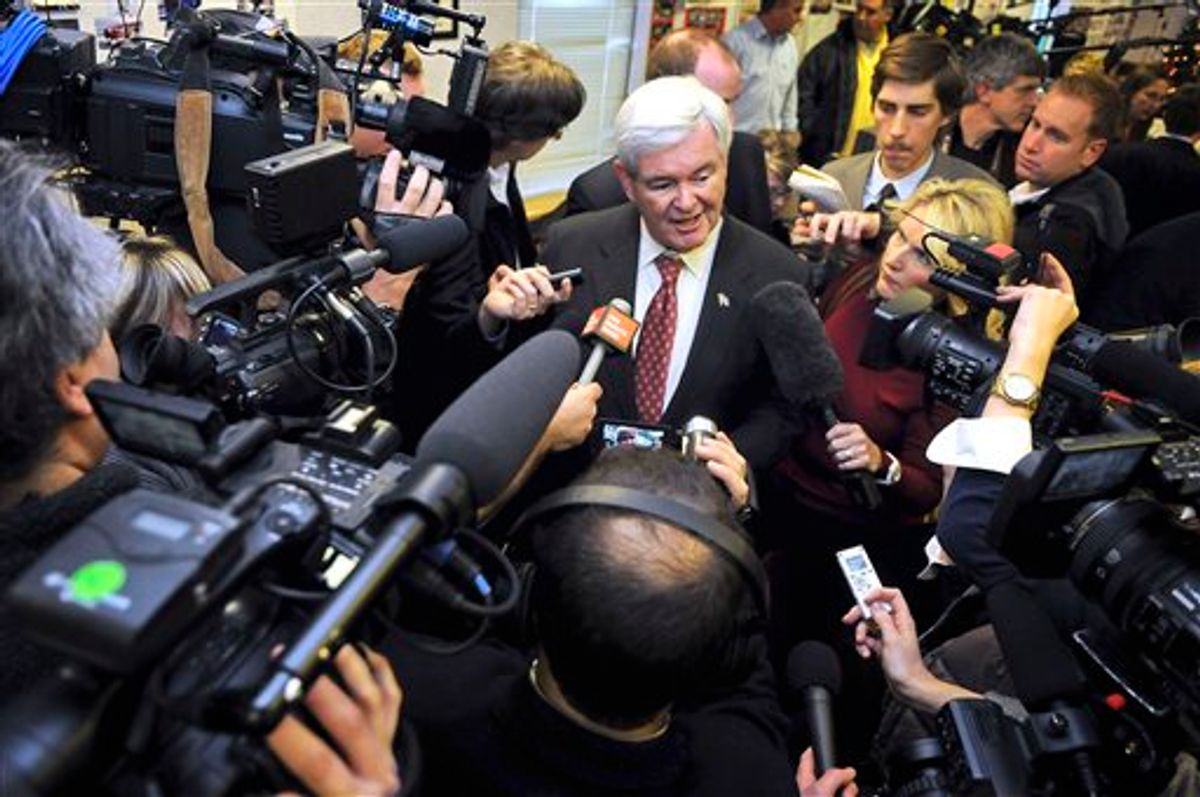 There are four more weekends between now and the Jan. 3 Iowa caucuses, and if they all go as well as this past one did for Newt Gingrich, the former House speaker will enter the primary and caucus season in fantastic shape.

On Saturday, Herman Cain officially ended his campaign, an anticlimactic announcement -- he'd already exhausted most Republicans' curiosity and patience and was in a polling free fall -- that should nonetheless hasten the migration of his remaining supporters to the Gingrich camp (especially if reports that he will endorse Gingrich are true). Then came a new poll from the Des Moines Register giving Gingrich a clear lead in the lead-off state, 7 points ahead of Ron Paul and 9 up on Mitt Romney -- and with a combined 43 percent of respondents calling Gingrich either their first or second choice. There was also encouraging polling news from New Hampshire, where the state's largest newspaper on Sunday followed up its surprise endorsement of Gingrich with a scathing attack on Romney, something it will likely repeat many times before the Jan. 10 primary.

All of this bolsters the notion that Gingrich may be better-suited for the spotlight of a national Republican race than any of the others who've briefly emerged this year as Romney's main rival, even if the potential that he'll suffer a Bachmann/Cain/Perry-like meltdown over the next few weeks is still very real. And it raises a question: If Gingrich really does have staying power and is able to make it to the Jan. 3 starting line as Romney's chief foe, what would he need to do to actually secure the nomination?

The obvious answer is: win the key primaries and caucuses. But in the primary and caucus season, success can be more than a matter of literal winning -- beating the expectations game can be even more important in the early tests. The most famous demonstration of this came on the Democratic side in 1992, when Bill Clinton convinced the political world that he was "the comeback kid" after losing New Hampshire to Paul Tsongas by 7 points. With that in mind, here's a look at how Gingrich is now positioned in the four major January tests and what he'll need to achieve to sustain and build a sense of momentum as the process moves along.

It's impossible to say now where exactly the bar will be set when the caucuses arrive, but it's hard to imagine Gingrich winning the Iowa expectations game without posting an outright victory. The reason is that Iowa, where about 60 percent of the activist-dominated caucus electorate is composed of Christian conservatives, is widely understood to be exactly the kind of GOP contest where Romney is supposed to struggle. So if Romney were to win, even by a tiny margin and with a small plurality, it would be hailed by the press and political world as a major breakthrough for him -- and a giant setback for Gingrich. Depending on the trajectory of polling over the next few weeks, this could also be the case if Romney finishes an unexpectedly close second; that is, if Gingrich opens, say, a 15-point lead and Romney ends up losing only by a few points.

On the flip side, Iowa also offers Gingrich a chance to build some real momentum, and to inflict some serious damage on Romney. Even if it ends up being unsurprising, there'd be no denying the significance of a lopsided Gingrich victory -- and if he can win by a larger margin than predicted by pre-caucus polls, his bounce would be even bigger. The wild card here is Paul, who is at 19 percent in the new Des Moines Register poll. The ideal scenario for Gingrich would be to post a clear victory and to have Paul beat out Romney for a distant second place -- an outcome that would advance both "Newt is surging!" and "Mitt is melting down!" narratives. A parallel can be drawn here to the 1988 GOP caucuses, when Bob Dole won an easy victory (as the polls had long suggested) but received an extra jolt when Vice President George H.W. Bush came in third place behind Pat Robertson.  Almost overnight, the outcome erased Bush's 20-point lead over Dole in New Hampshire, although Bush did ultimately manage to bounce back and save his campaign.

There's also a chance that Paul could win Iowa with a relatively small plurality -- 25 percent, say. This would probably not change his bleak prospects of securing the nomination, but it would likely harm Gingrich more than Romney, simply because Gingrich is more in need of an impressive showing in the state.

The dream scenario for Gingrich would be to ride a wave of momentum from Iowa into the Granite State, undo the significant lead that Romney currently enjoys in the state, and post an outright victory that could cripple Romney nationally. After all, New Hampshire, with its more secular Republican electorate, is supposed to be Romney's firewall; a defeat on the heels of a humbling Iowa showing would confirm and magnify every doubt that's ever been raised about his viability as a GOP candidate and could erode his already-shaky numbers in national and key state polls. At the same time, by pulling off the Iowa/New Hampshire one-two punch, Gingrich would then be positioned to capitalize on any Romney demise.

Winning the expectations game in Iowa is a well-established catalyst for polling surges in New Hampshire -- the "Big Mo" is how George H.W. Bush described this phenomenon after he defeated Ronald Reagan in Iowa in 1980 and vaulted from single digits to contender status. Others who've parlayed Iowa triumphs into sudden, sizable gains in New Hampshire include Dole and Democrat Dick Gephardt in 1988 and John Kerry in 2004. The most celebrated example came in 1984, when Gary Hart "won" Iowa by finishing a very distant second to Walter Mondale, who had been perceived as the overwhelming front-runner, then scored a stunning 13-point victory in New Hampshire that nearly propelled him to the Democratic nomination.

Dole's '88 example, though, serves as a cautionary tale: His Iowa victory -- combined with Bush's humiliating loss to Robertson -- actually lifted him to a 3-point New Hampshire lead over Bush in a poll released just four days later. (Bush had been ahead by about 20 before the caucuses.) This completely changed the expectations game for the primary, which was just four days away. Whereas before Iowa Dole would have been thrilled to lose to Bush by single digits in New Hampshire, now he was expected to win, with the media declaring that this was Dole's chance to finish off Bush. Thus, when a wave of last-minute Bush attack ads (along with a shaky Dole debate performance) reversed the vice president's slide and carried him to a 9-point win, it was treated as a major setback for Dole, who lost virtually every subsequent contest.

Assuming he doesn't actually win the state, Gingrich's biggest New Hampshire challenge might be to prevent expectations from getting out of hand. If he can combine a clear Iowa win with a New Hampshire showing that the political world deems respectable, he'll be well-positioned for the next battleground.

In Gingrich's perfect world, he'll come here with two victories under his belt and with Romney on the ropes. More realistically, South Carolina will be positioned to play its usual role of breaking the Iowa/New Hampshire tie. Either way, it may be a difficult venue for Romney to make a stand.

Data that is both recent and credible is hard to come by, but the numbers that are out there point to a high combined share for Gingrich and Cain (more than 40 percent) with Romney struggling to hit 20 percent. Not only is the former Massachusetts governor an imperfect cultural fit, but South Carolina is also a haven for Tea Party conservatism, home to Sen. Jim DeMint and a batch of Tea Party-aligned congressmen elected in 2010.  In other words, the potential exists for Gingrich to post a sizable victory here -- one that would confirm that he really is a serious threat to win the nomination and that might portend similarly big victories across the South in the March 6 Super Tuesday primaries.

If Gingrich wins decisively in South Carolina, it's tough to see him losing here. Like South Carolina's, the state's Republican voters embraced Tea Party conservatism in 2010, ignoring the pleas of national party leaders and opting for Rick Scott over Bill McCollum in a closely watched gubernatorial primary. And the latest polling numbers suggest Florida could be very fertile territory for Gingrich -- a PPP survey released last week gave him a staggering 30-point lead over Romney, 47 to 17 percent. (And this was with Cain still grabbing 15 percent.) If Gingrich comes into Florida on a roll, his biggest enemy will probably be expectations.

All of this is a long way of saying that Gingrich could win three -- or maybe even all four -- of the lead-off Republican contests. The question is whether this would be enough to end the process and make him the de facto nominee. What's peculiar about the 2012 GOP calendar is that after Florida there will be five weeks of minimal activity until Super Tuesday. So in theory, even if a formidable Gingrich tide builds in January it could ebb over the next month, especially if party leaders (and party-aligned media outlets) panic and commit themselves to undermining Gingrich. He could also commit a serious unforced error or three in this dead period, killing his momentum and giving new life to Romney for Super Tuesday.

For what it's worth, the last time there was such a large gap so early in a party's nominating process was on the Democratic side in 2000, when there was essentially no activity for the five weeks between New Hampshire and Super Tuesday. On the heels of a blowout loss in Iowa and a near-miss in New Hampshire, Bill Bradley vowed to use the time to regain the offensive in his race against Al Gore. But he struggled to generate any interest, especially with the media obsessing over the suddenly hot George W. Bush/John McCain battle, and lost every state on Super Tuesday.

That may not be a great parallel; the Democratic establishment was always fine with nominating Gore, so most of the party was happy to unite after his Iowa and New Hampshire wins. Gingrich is more of a wild card; how influential Republicans will respond if he starts winning is an open question. But if he runs the table in January, or even if he scores three decisive victories, he'll make it very tempting for them to climb on board -- a lot riskier for them to stick their necks out for Romney.