The world sets a post-Industrial Revolution record for carbon dioxide emissions. And things are going to get worse 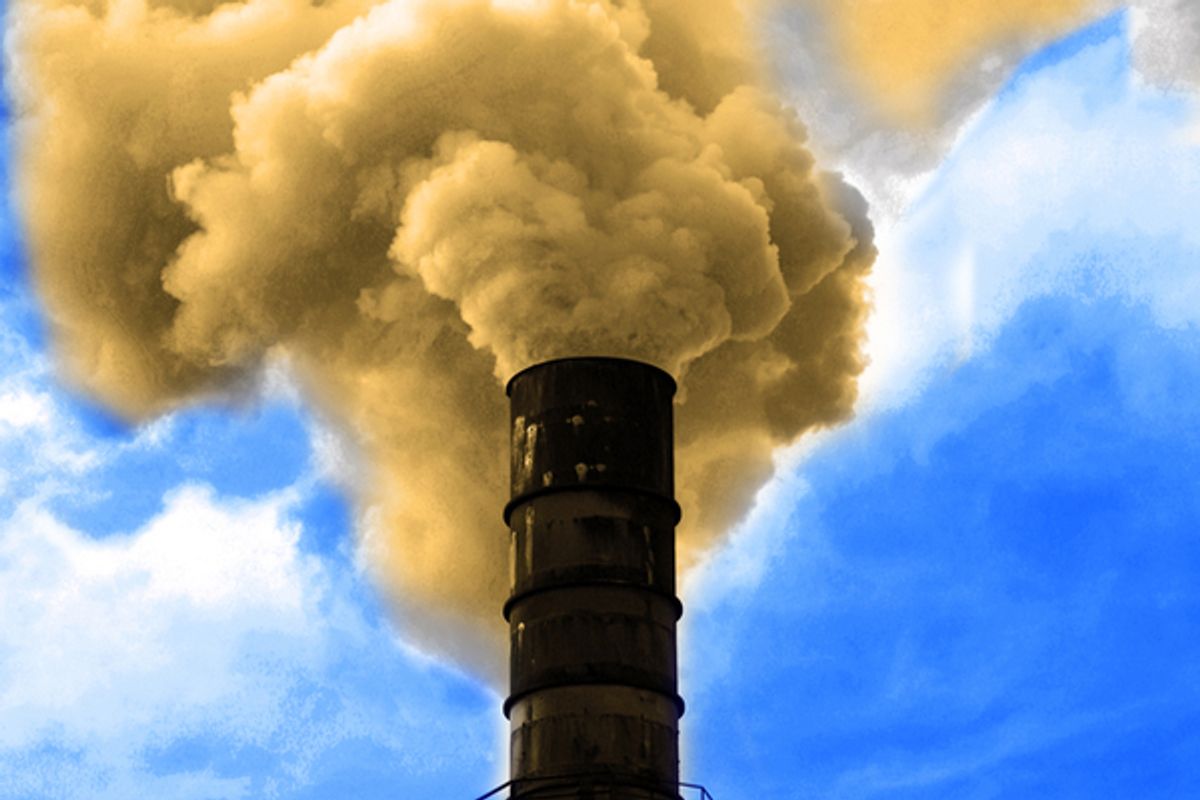 Let's play a game. Let's just suppose that there is a direct connection between the amount of greenhouse gases humans have been injecting into the earth's atmosphere since the beginning of the Industrial Revolution and the astonishing run of extreme weather that has afflicted the planet in the last two years. You know: the crazy tornado season, the devastating droughts, the disastrous floods. Let's throw in, for good measure, 2010's status as tied for the honor of hottest year in the historical record, and 2011's likely inclusion in the top 10 warmest years.

Then let's mull over this news: According to the scientists at the Global Carbon Project, in 2010, global emissions of carbon dioxide set a post-Industrial Revolution record.

Emissions rose 5.9 percent in 2010... the increase, a half-billion extra tons of carbon pumped into the air, was almost certainly the largest absolute jump in any year since the Industrial Revolution, and the largest percentage increase since 2003.

There are so many unpleasant things to mull over in this report, one hardly knows where to begin wringing one's hands. For example: Carbon emissions are now definitively no longer primarily a rich country crime: 57 percent of the 9 billion tons of carbon dioxide produced by burning fossil fuels and manufacturing cement in 2010 came from developing nations. China alone accounted for 2.2 billion tons in 2010, a 10.4 percent increase over 2009.

Considering how far China and India have yet to climb on the economic advancement ladder, it is just about impossible to imagine how this trend line is going to change in any significant way. As the Onion headline brilliantly sums up: "Report: Global Warming May Be Irreversible By 2006"

Meanwhile, in Durban, South Africa, attendees at the 17th Conference of the Parties (COP17) to the United Nations Framework Convention on Climate Change are engaging in the all-too-familiar spectacle of watching Chinese and U.S. negotiators get absolutely nowhere on the question of whether both developed and developing nations can come to an agreement on legally binding limits on greenhouse gas emissions, which wouldn't even kick in until 2020. It is hard to imagine a bigger charade: It stretches credulity to think that China is going to short-circuit its own economic growth by doing anything that would meaningfully cut down on the vast -- and growing -- quantities of coal that it is consuming, while at the same time the U.S. is politically incapable of following through on any commitment that its own negotiators would make.

And that's perhaps the most disheartening aspect to this story. Even as emissions mount, the political will in the U.S. to do anything about it on the federal level has hit rock bottom. Every single viable Republican candidate for president denies that greenhouse gases are a problem that requires a solution, there are insufficient votes in Congress to pass any form of progressive climate legislation, and President Obama rarely even mentions the words "climate change" anymore. It is the all-encompassing disaster that cannot even be named.

As Glen P. Peters, one of the leaders of the Global Carbon Project, told the New York Times: “There’s no evidence that this trajectory we’ve been following the last 10 years is going to change.”

Ah well. Not like that's a big deal or anything.