The origins of Rush's Newt crush

Twenty years after helping each other become stars, Limbaugh and Gingrich are teaming up again 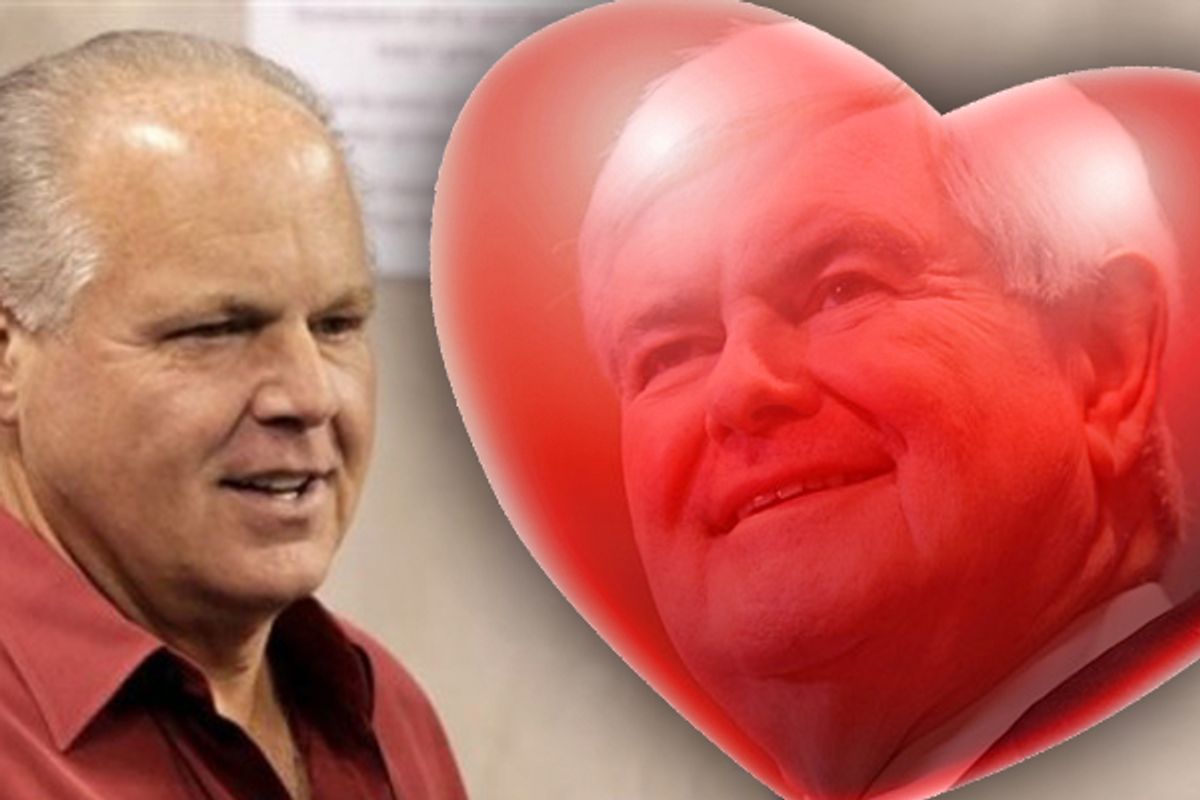 As he seeks to reassure skeptical conservatives and cement his sudden status as the front-runner for the Republican presidential nomination, Newt Gingrich has found a very helpful ally: Rush Limbaugh, who is probably one of the two most significant shapers of mass opinion on the right (the other being Fox News).

Gingrich's rise has prompted a number of prominent conservatives, some of whom have less-than-fond memories of how he handled his four years as House speaker, to highlight his past ideological apostasies and to raise questions about his character and leadership and management skills. "His temperament -- intellectual hubris distilled -- makes him blown about by gusts of enthusiasm for intellectual fads, from 1990s futurism to 'Lean Six Sigma' today," George Will, the harshest of Gingrich's critics on the right, wrote in his most recent column.

But on his radio show Monday, Limbaugh issued an impassioned defense of Gingrich's ideological credentials, heralding him as "the last person to actually cut government." And he stepped up his efforts this afternoon, claiming that "no matter where you look in the Republican establishment media today, there looks to be a coordinated attack on Mr. Newt":

George Will, I mentioned this yesterday, George Will has called Newt a Marxist. Fine; he can do whatever he wants. But I don't recall him ever calling Obama a Marxist. So there's a huge effort out there today, and it's not just today; of course it's been building. It was Herman Cain before Newt. It was Rick Perry when he came out strong. This effort's been directed at Michele Bachmann. And it is essentially an attack on conservatives. It is conservatives that nobody in the establishment inside the Beltway appears to want. Republicans and Democrats alike really apparently do not want genuine conservatives winning elections at the upper levels of the Republican Party.

Obviously, Limbaugh is providing Gingrich with invaluable cover here. But why?

Part of the explanation has to do with Limbaugh's status as a leading Romney-skeptic. He announced on his show a few months ago that "Romney is not a conservative," and even when Rick Perry's poll numbers collapsed earlier this fall and the political world began treating Romney as the inevitable nominee Limbaugh continued urging his listeners to be open to alternatives. He regards himself as a preeminent voice of the anti-establishment Tea Party movement, so in a way the GOP race is a test of Limbaugh's clout: If he makes it clear he doesn't want Romney to be the nominee, what will it say if Romney coasts to the nomination?

But when it comes to promoting Gingrich, there may be something deeper at work -- a bond that was forged 20 years ago, when Rush and Newt both rose to stardom at the same time by preaching the gospel of movement conservatism, which held not only that liberalism was bankrupt but that it was all too often enabled by Republican leaders who didn't actually subscribe to conservative principles. Limbaugh made the case on the airwaves, exploding from regional obscurity to national prominence, and Gingrich made it in the halls of Congress (and in late-night C-Span speeches), climbing from gadfly backbencher into the House GOP's leadership and then on to the speakership.

A key moment for both came in 1990, when a Republican president, George H.W. Bush, and top GOP leaders in Congress cut a deal with Democrats to reduce the deficit by raising taxes. Gingrich, then the minority whip, broke with his fellow leaders and led a revolt that divided the House GOP conference right down the middle. On the air, Limbaugh had his back, making it clear to his audience that there was at least one Republican leader on Capitol Hill who wasn't selling them out. Bush got his budget, but the Republican Party that emerged from his defeat in the 1992 election answered to Rush, Newt and their fellow advocates of compromise-phobic ideological warfare.

At the time, Limbaugh hosted a nightly syndicated television show, which was produced by Roger Ailes. When Bill Clinton was sworn in in January 1993, every new episode would begin with a graphic listing how many days he'd been president under the heading "America Held Hostage." Gingrich, who essentially pushed longtime House GOP leader Bob Michel aside in 1993 and was set to succeed him after the 1994 elections, spent those two years railing against every administration proposal and action and feeding the right's siege mentality -- antics that provided perfect material for Limbaugh's shows, which regularly featured clips of Gingrich making the case against the president.

When the '94 midterms produced a landslide that handed Republicans control of the House for the first time in 40 years, the newly elected GOP members called Limbaugh to their orientation session, where they honored him as a "Majority Maker." And with Newt wielding the speaker's gavel, Limbaugh changed the opening of his show. Now it declared: "America, the way it ought to be."

There have certainly been times since then when Limbaugh has been critical of Gingrich, never more than this past spring, when he blasted the former speaker for his comments about Rep. Paul Ryan's budget plan. But while many of today's Republican voters have only vague memories of the early '90s (or none at all), Limbaugh surely remembers that period well -- and may just get a kick out of rediscovering all these years later the partnership that helped make his career back then.