The Roosevelt Obama should embrace

Tuesday's speech will invite comparisons to Teddy, but FDR is the one whose legacy Democrats need to reclaim 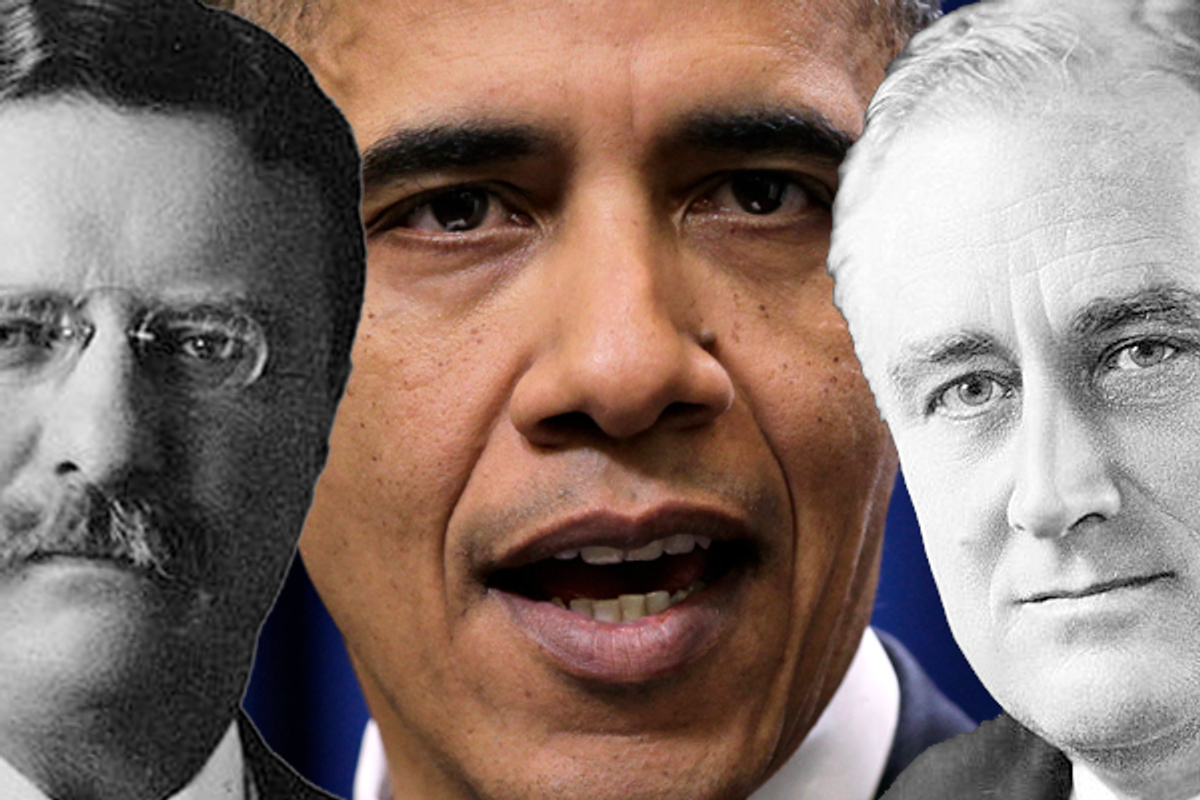 On Tuesday, President Obama is scheduled to deliver a major speech that may set the tone for his reelection campaign in Osawatomie, Kan. In doing so, he is inviting comparisons with Theodore Roosevelt, who laid the groundwork for his 1912 campaign as the third-party candidate of the Progressive Party with his 1910 speech at the John Brown Memorial Park at Osawatomie on “the New Nationalism.”  According to T.R. a little more than a century ago:

The American people are right in demanding that new Nationalism without which we cannot hope to deal with new problems. The new Nationalism puts the National need before sectional or personal advantage. It is impatient of the utter confusion that results from local legislatures attempting to treat National issues as local issues. It is still more impatient of the impotence which springs from over-division of governmental powers, the impotence which makes it possible for local selfishness or for legal cunning, hired by wealthy special interests, to bring National activities to a deadlock. This new Nationalism regards the executive power as the steward of public welfare. It demands of the judiciary that it shall be interested primarily in human welfare rather than in property, just as it demands that the representative body shall represent all the people rather than any one class or section of the people…

Having argued for two decades for a new liberal nationalism in the spirit of T.R.’s New Nationalism, I am delighted that the president has chosen to identify himself with his great predecessor.  At the same time, I worry that the implicit Obama/T.R. comparison may be little more than another gimmick out of the Clintonite New Democrat bag of debating tricks.

Will President Obama, who so often favors bipartisanship or post-partisanship, note that T.R. was a Republican?  That argument doesn’t work anymore, now that the two parties have more or less completely switched regional and ethnic constituencies.  Now that the shell of the Republican Party houses the old Jefferson-Jackson-Bryan Democrats — white Southerners and Westerners, plus much of the white working class in the North — appeals by contemporary Democrats to the legacy of great reformist Republicans like Abraham Lincoln and Theodore Roosevelt are as wasted on the Republican heirs of Strom Thurmond and George Wallace as invocations of more recent moderate Republicans like Nelson Rockefeller, Jacob Javits or John Lindsay would be.

And then there is the elephant in the room that the Clinton-Obama New Democrats prefer to avoid mentioning.  Actually, there are two elephants in the room:  one in a wheelchair, brandishing a cigarette holder, and another elephant wearing an Open Road Stetson.

Franklin Roosevelt and his protégé Lyndon Johnson, whose career the older man fostered in the 1930s and 1940s, are the two central figures in the 20th-century American progressive-liberal tradition. While the debacle of the Vietnam War continues to cloud the reputation of the latter, these are the two most important liberal presidents of all time.  They and their allies bequeathed to us Social Security (FDR) and Medicare (LBJ), two programs that even Tea Party activists support, according to polls.  And LBJ bullied and cajoled Congress into passing the Civil Rights Act of 1964 and the Voting Rights Act of 1965, which brought to an end centuries of legal apartheid in America. As economic security and racial justice are at the heart of the modern liberal project, you would think that posters of Roosevelt and Johnson, along with Martin Luther King Jr., would be brandished at every Democratic convention and displayed on every progressive’s office wall.

But the New Democrats who came to power first with Clinton and then with Obama, whose administration is filled with Clinton administration veterans, timidly ran away from the legacy of FDR’s New Deal and LBJ’s Great Society.  Many New Democrats were traumatized by the success of Ronald Reagan and the conservative movement in stigmatizing the New Deal as a failure and the Great Society as a boondoggle.

In addition, the New Democrats of the late 20th century sought to move the Democratic Party in an upscale direction. They turned away from the white working class and rural Americans to socially liberal, fiscally conservative upscale whites as a constituency, and arranged for Wall Street to eclipse the labor movement as a source of donations for Democratic campaigns.

The very term “New Democrat” is a repudiation of the “Old Democrats” of the New Deal/Great Society/civil rights era, like Roosevelt and Johnson.  From its beginnings in the 1980s, the entire neoliberal movement has been an exercise in triangulation, between the “old Democrats” based in organized labor and the civil rights movement and the conservative movement.  In effect, the New Democrats conceded that the right was correct about the overreaching of the New Deal and Great Society programs. In the words of Bill Clinton: “The era of big government is over.” The neoliberal synthesis of Clinton and Obama promised a “third way” between Roosevelt-Johnson liberalism and Reaganite conservatism, combining moderate conservatism in economics with post-'60s social liberalism on matters like abortion, gay rights and affirmative action.

Like other political movements, the New Democrats of the 1980s and 1990s needed what the literary critic Van Wyck Brooks called “a usable past,” a story about how they fit in the grand scheme of American history.  The neoliberals of the centrist Democratic Leadership Council also needed a pantheon of heroes, as an alternative to the Old Democrat pantheon dominated by FDR and LBJ.

Their solution was awkward and unsatisfactory.  They sought to distance themselves from mid-century liberalism, while maintaining their center-left credentials, by means of two strategies.

One strategy of Clintonian neoliberals was to shield post-Reagan Democrats from right-wing criticism by idealizing two minor Democratic presidents of the New Deal/Great Society era whom conservatives often praised: Harry Truman and John F. Kennedy. Neoconservatives praised Truman as the architect of the anticommunist containment strategy (the fact that Truman was more pro-Zionist than FDR had been did not hurt, either).  Center-left hawks, many of them supporters of the Iraq War, recently founded a Truman National Security Project instead of a Franklin Delano Roosevelt National Security Project.  At the same time, free-marketeers on the right embraced John F. Kennedy’s lowering of top income rates, passed by the Johnson administration after Kennedy’s murder, as a precedent for tax-cutting supply-side economics.   By downplaying LBJ and playing up the two lesser Democrats who preceded him in the White House, neoliberal Democrats could avoid association both with a failed war, Vietnam, and with Great Society-style “big government.”

Another rhetorical strategy of the New Democrats, in their attempt to create a usable past for Clintonism-Obamaism, has been to equate late 20th century neoliberalism with early 20th century progressivism instead of mid-century New Deal/Great Society liberalism. To that end, they successfully persuaded Democrats to drop the term “liberal,” used in the mid-20th century, for the dusty old term “progressive,” used in the early 1900s. “Liberal” had negative connotations with much of the public after the turmoil of the 1960s, but few Americans knew enough about the Progressive Era to have strong feelings about “progressive.” Alas for the New Democrats, the propagandists of the right figured out what they were up to, and in the last few years they have demonized “progressive” as aggressively as they earlier demonized “liberal.”

In addition to reviving “progressivism,” the neoliberal strategists and spin doctors have tried to identify contemporary Democrats with turn-of-the-century progressives like Theodore Roosevelt and Woodrow Wilson. Never mind that those two presidents despised each other. Never mind the incompatibility of T.R.’s New Nationalism and Wilson’s New Freedom. That misses the point. From the perspective of New Democrats seeking to immunize themselves from Reaganite attacks by distancing themselves from mid-century liberalism, T.R. and Wilson had one attractive characteristic: They were not FDR and LBJ.

The New Democrats of the last generation must have thought they were terribly clever, coming up with an Orwellian revision of center-left history in which they airbrushed out the controversial figures of FDR and LBJ and emphasized the less controversial Truman, Kennedy, T.R. and Wilson. But their alternate tradition was not a genuine tradition of public philosophy and policy; it was merely an advertising gimmick, designed to make the post-Reagan Democratic Party appeal to its new donor base of Wall Street billionaires and multinational corporate executives. The neoliberal attempt to foreground early 20th century progressives like T.R. and Wilson while treating FDR and LBJ as embarrassing relatives best not spoken about was always absurd — like rewriting Christianity to make the dominant figure John the Baptist instead of Jesus.

Theodore Roosevelt and Woodrow Wilson were important precursors of Franklin Roosevelt, whose New Deal included elements both from the New Nationalism and the New Freedom, and of Roosevelt’s most important successor, Lyndon Johnson.  Today the fulfillment of the 20th century progressive-liberal reform movement in the New Deal and Great Society is under attack by a primitive, neo-Confederate right.  The center-left requires champions who are not embarrassed by the “Old Democrats” of the 1930s through the 1970s, as were the timid and opportunistic New Democrats of the late 20th century.  The times require the center-left to abandon the cynical attempt to come up with a “progressive” pantheon composed of T.R., Wilson, Truman and Kennedy that might be acceptable to the right, in favor of one that is unapologetically centered on the second Roosevelt in the White House, not the first.