Why no one's investigating Wall Street

The government finds money to crack down on food stamp "fraud." If it wanted to go after finance crooks, it could 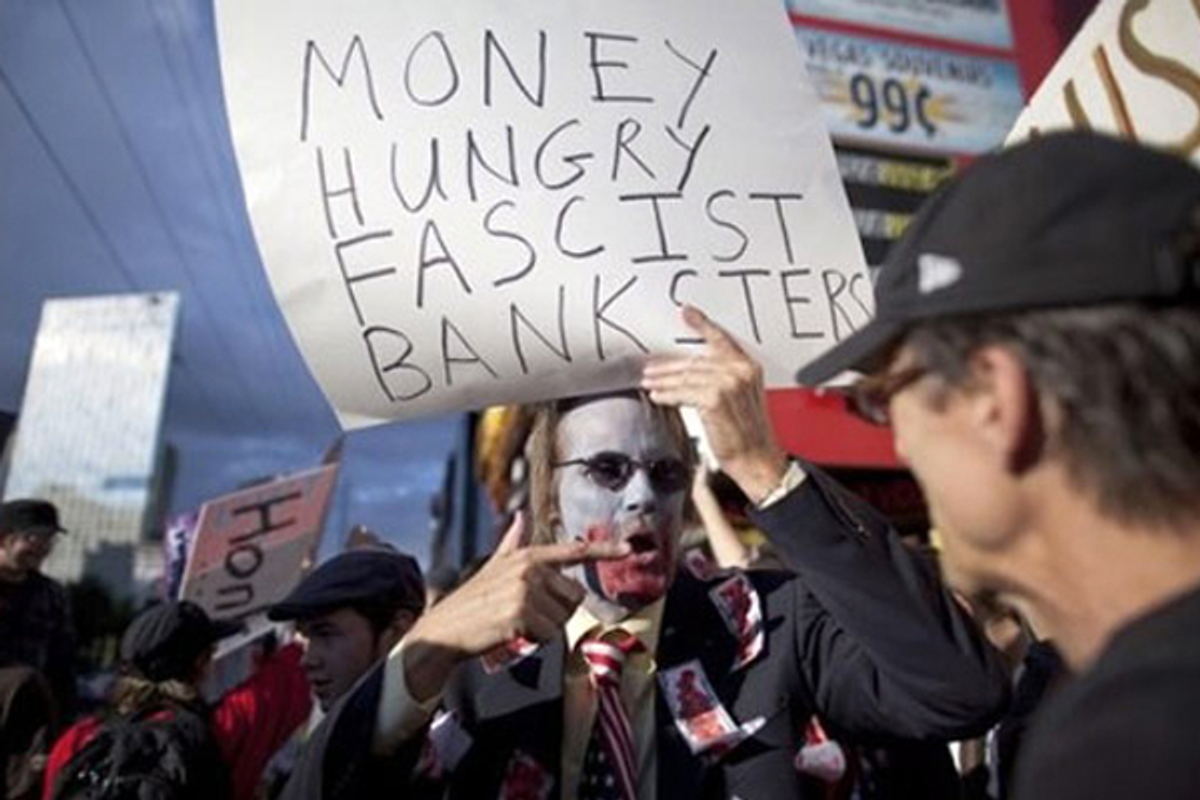 When it comes to our government's collective refusal to aggressively investigate — much less prosecute — Wall Street crime, one prevailing line of apologism implies that it's all about resources. As the general fable goes, Wall Street is so sprawling and so lawyered up that public law enforcement agencies simply don't have the resources to make sure justice is served, especially at a time of budget deficits. In this story, Wall Street is not simply too big to fail; it's too big to even police.

The motivation for such myth-making is obvious: It wholly absolves elected officials for their decisions to let their financial-industry campaign contributors off the hook. Yet thanks to recent events, the whole "Too Big to Police" rationale is being exposed for the farce that it is.

At the local level, the same governments that plead poverty when they're asked to enforce their laws on financial fraud have somehow found plenty of resources to deploy their militarized police forces against Occupy protesters. At the federal level, it's even more blatant. As we learned in a little-noticed Washington Post piece on Tuesday, the same Obama administration that has refused to spend political capital and federal monies to go after Wall Street is expending new resources to crack down on the supposedly rampant problem of food stamp "fraud."

Tracking an individual example of this phenomenon, Matt Taibbi makes clear that it's really difficult to overstate just how revealing this kind of thing is. Wall Street crooks who stole trillions of dollars are rewarded by the administration with additional trillions in bailouts. Meanwhile, those crooks' now-impoverished victims — so poor they are on food stamps, mind you — are being targeted by the same administration for criminal investigation for allegedly making a few extra bucks on recycling empty bottles.

Taken together, these microcosmic examples (and there are plenty of others) all illustrate an inconvenient truth: namely, that law enforcement decisions today are not being guided by resource questions or dispassionate analyses of priorities, they are being guided by political will.

In states, it’s not that governors and attorneys general (other than those in New York, Nevada and California) want to go after financial fraud but can’t; it’s that they don’t want to go after that fraud, and they do want to shut down anti-Wall Street demonstrations. Why? Because, in the words of Democratic Gov. John Hickenlooper of Colorado, they fear the demonstrations are “something that could easily catch on.”

Likewise at the federal level, it's not that President Obama wants to pursue Wall Street crime. It's that as the biggest recipient of Wall Street cash in American history, he is making deliberate decisions both to avoid prosecuting the financial sector, and to continue past policies that make prospective prosecutions more difficult than they need to be -- all while playing to old "welfare queen" demagoguery with a new election-year effort to villainize food-stamp recipients.

In these decisions, we are being taught a lesson we should have learned from the instantaneous changes after 9/11. Before the terrorist attack, we were often told we were so broke, we had no money to address any national priority (other than massive tax cuts for the wealthy, of course). Immediately after the attack, however, we suddenly had unlimited resources to wage adventurist wars and finance the Military/Homeland Security/Police Complex. Of course, nothing about our budget situation changed; the only thing that changed back then was the whims of politicians.

It's the same thing today, and not just when it comes to financial fraud (though that's the best example), but when it comes to so many different expenditures of law enforcement resources. Municipal governments, for instance, say they have no resources to maintain homeless shelters, yet they seem to have plenty of resources to enforce municipal ordinances making homelessness illegal, and to bust the Occupy protests. Police forces say they don't have the resources necessary to adequately fight violent crime, but they've got plenty of money to arrest pot smokers. The list is endless.

No doubt, it's disturbing to acknowledge these truths, because they make us see that our political leaders aren't being forced to do odious things, as they sententiously claim. On the contrary, they are most often using their unilateral discretion and purposely deciding to do those things.

Such a revelation is especially painful — and inconvenient — to hardcore partisans, who want to and/or have a vested interest in insisting that their particular political deity is really a "good person" who only does bad things out of necessity. (Hence, why Obama partisans so often insist that every campaign promise President Obama breaks is a result of outside forces compelling him to do so; it allows them to avoid admitting that Obama is getting exactly what he wants.) It's also anathema to most of the political press corps, because that press corps has been reorganized around worshiping -- rather than challenging -- the political establishment's narratives. Thus, the truth of these decisions is almost never allowed in polite political debates or flagged in most reportage. (Notice how the Post's food stamp story didn't provide any larger context or comparison with Wall Street fraud -- and notice that we probably won't see the same Wall Street-shilling pundits who complain of society supposedly unfairly demonizing financial executives suddenly saying that the government is now unfairly demonizing food stamp recipients.)

However, just because a revelation is difficult or jarring doesn't make it untrue, nor does it justify suppressing the truth. For only when we see those larger truths can we contextualize governmental decisions and understand that when it comes to law enforcement, almost everything is happening on purpose.