The U.S. announces that foreign aid will be tied to protection of sexual minorities. It could make a big impact 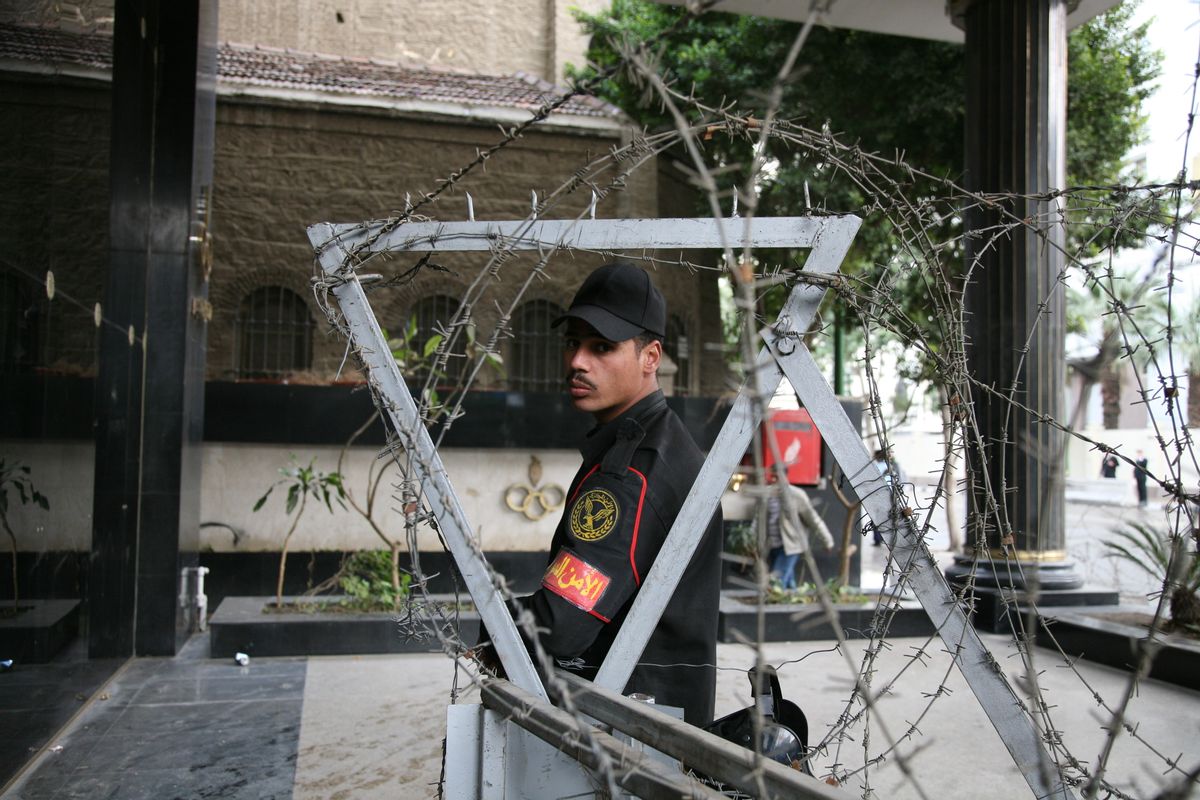 A guard stares through fencing and barbed wire in front of government offices in downtown Cairo, near Tahrir Square. Most of Cairo is untouched physically by the revolution, but a few areas remain specially guarded and prepared against riots. - [Michael Luongo/GlobalPost]
--

The U.S. took a groundbreaking step on global LGBT rights Tuesday, joining the UK in tying foreign aid to governments’ protection of sexual minorities, raising the stakes in the increasingly globalized battle over gay rights.

The Obama administration’s sweeping initiative —which will potentially steer billions of dollars in U.S. aid toward countries and programs that protect rights while expanding efforts to protect LGBT refugees — was announced ahead of Human Rights Day. The timing reinforced a now-common refrain that has been spoken, chanted and shouted by rights activists around the world for decades: Gay rights equal human rights.

President Obama issued an official memorandum “directing all agencies engaged abroad to ensure that U.S. diplomacy and foreign assistance promote and protect the human rights of LGBT persons,” while Secretary of State Hillary Clinton made the American position clear to diplomats from around the world gathered at the United Nations in Geneva: "Gay rights are human rights, and human rights are gay rights."

America overwhelmingly remains the world’s largest provider of official development assistance, and the UK is the fourth-largest. Although the U.S. State Department has worked diligently behind the scenes to promote LGBT rights and cultural awareness via its embassies around the world, the agency has never before made such an overt move. Together the two powers have created a united front in a battle that has rapidly escalated in the past 10 years.

From the Netherlands’ legalization of same-sex marriage in 2001 to India’s decriminalization of homosexuality in 2009, many of the world’s laws have changed even if longstanding cultural practices and religious beliefs have not.

For some LGBT rights supporters, the irony of Obama and Clinton’s message is that the U.S. is not typically considered one of the most progressive countries for legal protections of LGBT rights. Since 1996, the federal Defense of Marriage Act has defined marriage as a heterosexual union, and just six states grant same-sex marriage licenses.

And of course, anti-gay bullying remains a corrosive and sometimes fatal cancer on society, while many communities have saved no place at the table for the gay, the trangendered or the intersex. Political leaders like Rick Santorum have continued to frame gay relationships as threatening to American society.

At the same time, public support for gay rights is on the rise and polls at over 50 percent. The U.S. military ended its Don’t Ask, Don’t Tell policy in September, and even anti-gay activists have conceded that America is moving toward a society that protects its LGBT population.

"This is an issue where we are pushing for movement,” Cameron said, just weeks after throwing his support behind a new LGBT equality group called The Kaleidoscope Trust. “We are prepared to put some money behind what we believe.”

Leaders of countries including Uganda, Nigeria and Zimbabwe — where homosexuality is widely considered “un-African” and remains illegal — called Cameron out on his proclamation.

Ugandan presidential adviser John Nagenda said that Ugandans, who have gained a global reputation for creating an anti-gay climate since 2009, were “tired of these lectures” and were not to be treated like “children.”

Zimbabwean President Robert Mugabe called Cameron “satanic,” an illustration of the religious undertones of the often hostile international debate. Christian fundamentalist groups from the U.S. have made powerful inroads to Africa in recent years, evangelizing a conservative brand of Christianity with a profoundly anti-gay posture. Meanwhile conservative Muslim and Jewish groups have led campaigns against LGBT rights in countries ranging from the United States to Saudi Arabia.

As Graeme Reid, director of the LGBT rights program at Human Rights Watch, wrote for GlobalPost’s “Rainbow Struggle” series in November, the battle lines are being redrawn on a global scale, tipping societies toward equality in some places while invoking backlash in others.

“Instead of a move towards decriminalization, we see some countries introducing new legislation or tightening up on existing legislation or implementing previously dormant laws,” Reid wrote. “Stricter laws are seen as a way of shoring up ‘traditional culture.’ Of course, the irony that most of the sodomy laws are a vestige of colonialism in the first place is often lost.”

As the U.S. and the UK grapple with their own past and present imperial legacies, the bilateral commitment of foreign aid to more LGBT-tolerant countries is sure to give momentum to the equality movement. But as in the U.S. where LGBT policy is often contradictory and social attitudes vary widely — or in Spain where gay marriage is legal but discrimination persists — official acts are only part of the story.