Can Occupy and the Tea Party team up?

In a Virginia art gallery, supporters of the two movements quietly explore the possibilities 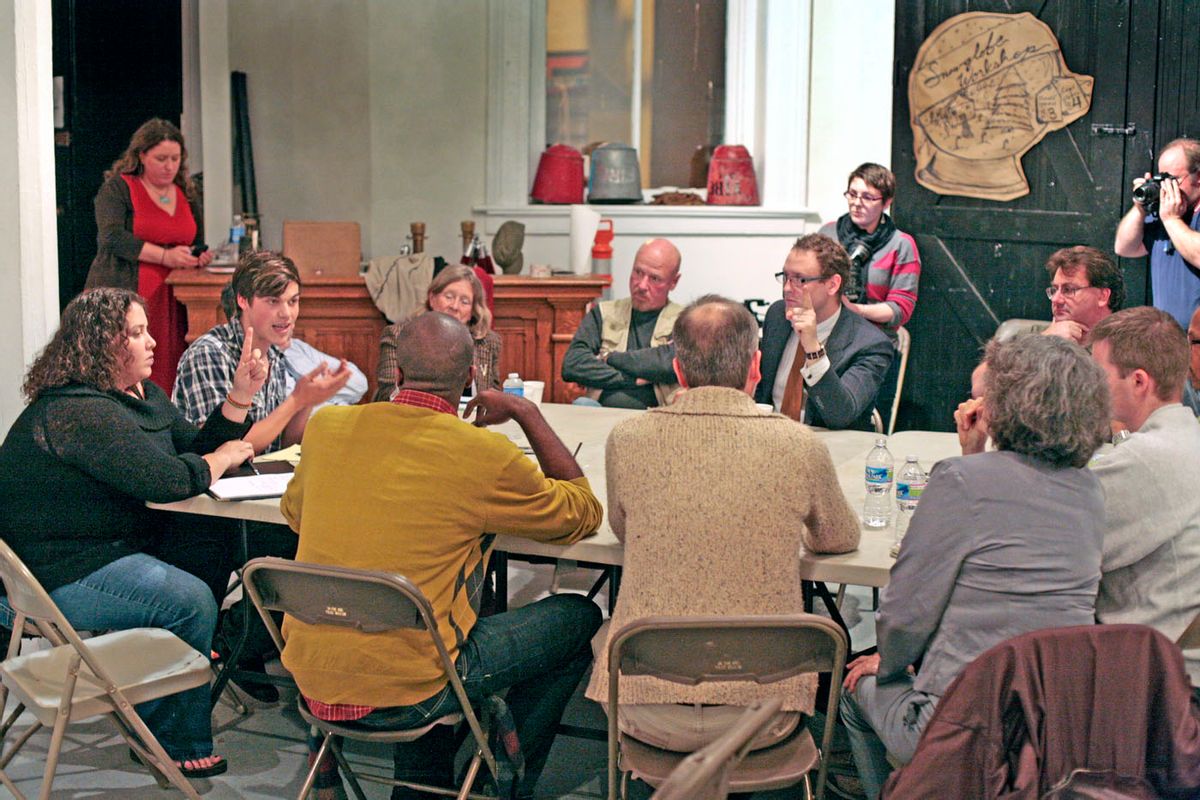 But first and foremost, the 12 men and women from seemingly polar spots on the political spectrum agreed on this: The meeting never happened.

“I think it’s all very, very important that we state very clearly that this was not a meeting between the Tea Party and the Occupy movement,” declared Donald Rallis, an Occupy Richmond member, as the meeting wound to a close. His sotto-voce assertion meets with a flurry of “up twinkle” hands -- or vigorous head nods -- depending on the individual's political leanings.

In the context of two political movements where individual thought is prized -- and where surreal events often influence outcomes – Rallis' denial of reality made perfect sense.

“None of us want to be open to the accusation that we are trying to hijack the movement,” he explained.

If there is a hijacker at this unlikely meeting of the minds, it may well be Tom Robinson, a self-described “Archie Bunker to the Richmond Occupy movement” and founder of the Peninsula Patriots Tea Party chapter in Matthews, Va. Robinson orchestrated this unlikely summit after having a number of one-on-one discussions with Occupy members.

His plan firmed up after the two movements joined forces at a recent Richmond City Council meeting. Occupy Richmond members came to support the local Tea Party’s efforts to recoup $8,544.82 that the conservative group paid for permits to hold a rally in a city park where occupiers later camped free for more than two weeks.

This was not the first time Occupy Wall Street and Tea Party members have met. But it was among the first such meetings to be held with a stated objective of determining whether the two groups might cooperate on certain common issues. Robinson said that he hoped to spark an evolution for both organizations, which thus far have largely confined their public interactions to attacks on one another’s ideologies or grooming habits.

“We need to kiss and make up a little bit,” said Robinson, a Richmond entrepreneur and developer with a baby-smooth pate and a self-described ADHD-truncated attention span. “It might be a small step, but I’m hoping we can make a little bit of history here tonight. When I listen to either side, it becomes very clear … I feel that we have a lot of similarities.”

That assertion found merit as the assembled Tea Partyers and occupiers introduced themselves and stated their hopes. Similarities far outweighed differences.

“Less government and more power to the people,” says Gilbert Wilkerson, explaining why he joined the executive board of the Richmond Tea Party.

Mark Wood, a middle-aged occupier, echoed the thought: “To return power to the people -- that’s at the core of it for me.”

Salon and others have pontificated on the convergence of the Tea Party and Occupy agendas. While one blames big government run amok and the other accuses Wall Street, both see a system where power feeds on power at the expense of the common citizen. But concerns about personal hygiene or religious zealotry largely have kept the two groups siloed. A Facebook community page titled "Tea Party and Occupy Wall Street Unite" boasts just 16 “likes," an indicator that unity is not exactly trending.

But when Occupy Richmond members met on a cold night late last month in front of Ipanema, a popular vegetarian restaurant and watering hole, they debated Tom Robinson’s olive branch: an invitation to meet with members of the Richmond Tea Party.

“We would be pretty much the first Occupy group to sit and meet with the Tea Party,” said Bentley, a single-named woman with long flowing skirts as “up twinkle” hands silently wiggle in nervous agreement. A long and tense debate ensued, ending with a resolution stating that six Occupy Richmond members would accept the invitation  but attend only on condition that they would not be representing the Occupy Richmond organization.

Robinson’s effort to recruit Tea Party members for the meeting proved no less difficult. He recounted some ruffled feathers and angry words from some members who worried that their organization might be tainted by the stain of even casual association with Occupy members.

But once in the same room, any discomfort members of the two groups might have felt seemed to melt away.  The discussion proceeded straight toward questions of constitutional theory -- whether the 220-year-old foundational document is best salvaged or scrapped after having been so pillaged by elected officials and corporate interests in the intervening years.

“You’re saying you want a new system,” said Elana Siddall to the occupiers. "The Tea Party is saying there already is a system -- the Constitution. So why not go back to that?”

Because, says Josh Kadrich, one of the four Richmond occupiers arrested at the Oct. 31 eviction of their encampment, “the world of today is so drastically different than 250 years ago.” He points to globalization and the rise of multinational corporations that move easily across borders, taking their money and influence with them wherever they go.

“I think a constitutional convention might be something interesting to consider,” Kadrich suggests, prompting a suggestion from Philip Kelly, another occupier, that perhaps a new constitution might include a separation of corporations and state similar to the current church and state partition.

“In some respects, I agree with you,” said Freddy Boisseau, a member of the Chester Patriots Tea Party chapter, who blames politicians influenced by greed, corrupted by power, for straying from the Constitution’s intent.

Kadrich summarized a few things the two movements could agree on: that the common citizen is no longer represented by his elected officials; that holding political office tends to corrupt even well-intended people; and that political parties are taking advantage of voters by seeking to polarize issues that really are of minimal consequence.

Two hours later, no blood has been drawn. The cheese knife on a nearby hors d'oeuvres platter remains unused except to slice a few slivers of pepper jack.  Still, differences occasionally show through. Both sides speak in broad strokes about patriotism and devotion to country. But while both sides agree that the Constitution is a well-meaning and important document, the Tea Partyers are unyielding in their devotion, while occupiers say they're ready to toss all or part of it.

And listening to their hopes and fears, another delineation emerges. The Tea Party members rely on their early American history classes, exhibiting an almost encyclopedic knowledge of the Federalist Papers and obscure letters exchanged between the Founding Fathers as they make arguments to return to what they believe are strict interpretations of the Constitution's intent. Their Occupy counterparts know plenty about applied constitutional theory, but they really only perk up when it comes to 20th century history. The occupiers paint the rise of the middle class after World War II, aided by the strength of unions, high taxes on the wealthy and a robust manufacturing-based economy, with vivid imagery that evokes memories of Rosie the Riveter. The movements emerge from two very different conceptions of what is important in American history.

Despite their differences and the cover story that the Tea Party and Occupy Richmond never met, members of the two groups seemed eager to plan a follow-up meting to talk some more.

“A team-up of the Tea Party and Occupy movement would be the biggest threat ever,” suggests Kadrich, half-joking, as emails are exchanged and plans are made to attend one another's meetings.

Discussions about forming a Google group trail off, a reminder of one of the biggest differences between Occupy and Tea -- tech-savvy youth versus aging dial-up users. But even the digital divide seems like a narrow gap as the meeting dissolves into the night.

“It started here in old sleepy Richmond, but hopefully it can move nationwide,” said Robinson, entertaining big dreams. “We could be the mothers and fathers of a second American Revolution. We know we have a common fight -- the government has got to get scared of us.”

Chris Dovi is a freelance journalist in Richmond, Va., who writes about government, politics, and education. You can reach him at dovidovidovi@gmail.com.