Is this what the future of Occupy looks like? 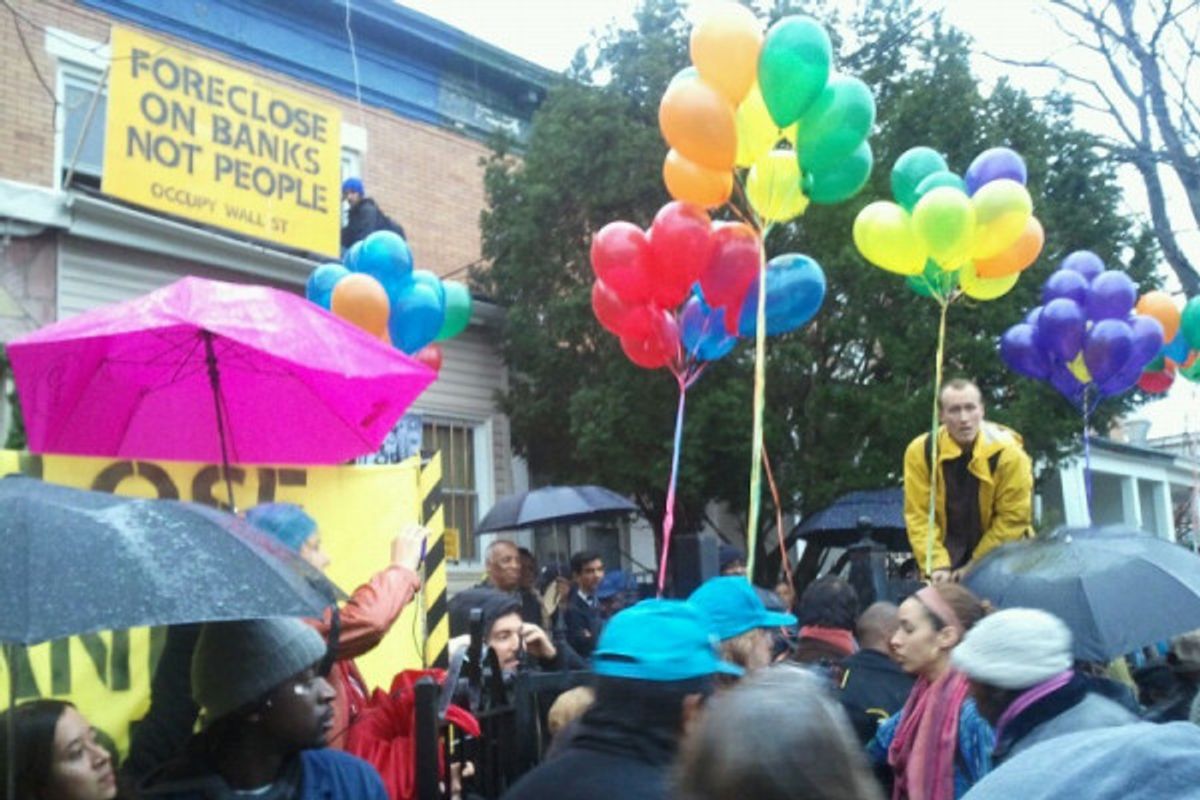 The Occupy Our Homes campaign launched Tuesday, an attempt by some within the movement to pivot to the foreclosure crisis after the clearing by police of occupied parks and squares around the country.

The campaign is focusing on installing homeless families in vacant foreclosed upon buildings, as well as disrupting foreclosure auctions, and the like. On the policy level -- in a break from the no-demands ethos of some segments of the movement -- Occupy Our Homes is demanding that mortgage principal be written down to current home values.

Actions happened all around the country on Tuesday, which you can read about here.

I spent the day at the Occupy Our Homes march in poverty-stricken East New York, Brooklyn. It was one of the smoother Occupy events I’ve attended, likely because of the guiding hand of experienced organizers with the community, religious and labor-affiliated groups that helped put the day together. The crowd progressed in an orderly way from vacant property to vacant property in East New York, with stops at each one to hear stories from people who have gone through foreclosures.

The turnout of perhaps 500 or 600 people was not bad for a rainy weekday afternoon. Members of the media were out in force.

And the action seemed to strike the right balance of festivity — there was a band and a block party -- and seriousness. We were told, for example, that the foreclosure rate in East New York was five times as high as it is in New York state. (That’s hardly the only metric that shows just how dire conditions are in East New York.)

In a carefully choreographed moment, the march ended at a vacant home that had already been occupied by a homeless family with two children, who are 5 and 9 and were on hand for the day’s festivities. The vacant house, at 702 Vermont Street, was foreclosed upon by Bank of America, according to organizers. It’s not clear who the original owners were.

Here, Alfredo Carrasquillo, the father of the family occupying the house, fights back emotion while addressing the crowd:

Carrasquillo also went out of his way to thank the NYPD for letting the action go off without a hitch. There were, indeed, officers on hand who were not intervening as occupiers moved various furniture (and a Christmas tree) into the house. I’ve asked the NYPD and organizers for comment on what sort of arrangement they have (if any), and I’ll update this post if I hear back.

How the police respond will be a key factor in how Occupy Our Homes develops. Will the occupations of vacant homes degenerate into confrontations with police?

The other question, of course, is whether organizers can continue to turn the considerable energy on display in East New York into sustained action on foreclosures. Today was an auspicious start.