In a stellar year for the novel, these five books stood above all others 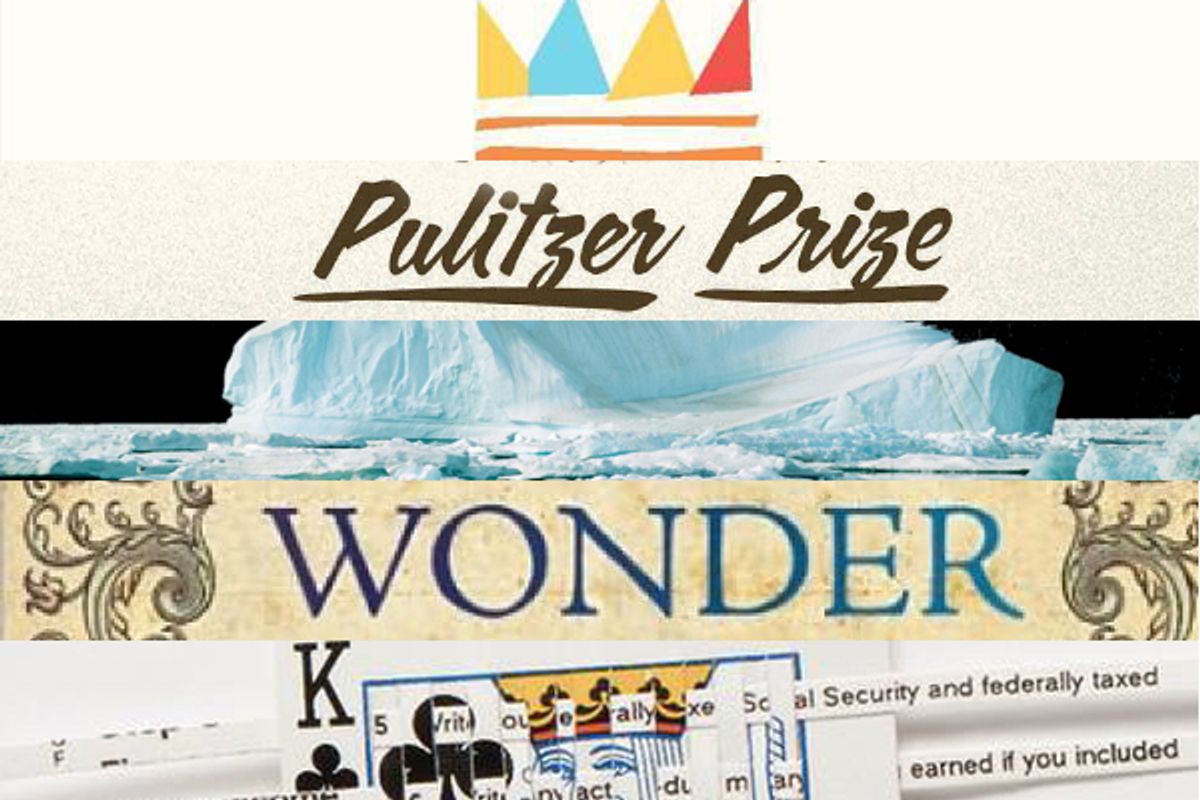 The book business may be undergoing tectonic changes brought on by the booming popularity of e-books, the consolidating power of Amazon.com and the wobbly state of bricks-and-mortar bookstores, but books themselves are better than ever. It was a particularly great year for fiction, one of the rare ones in which it felt nearly impossible to choose among many strong candidates. So much so, in fact, that I've taken the unusual step of adding a list of honorable mentions.

The 10 best books of 2011 (five fiction, five nonfiction) feature characters ranging from empresses to impostors, settings as far flung as Amazonian jungles and secret Antarctic cities, themes as compelling as love, race, class, art, revolution and the very nature of communication itself. (We'll reveal the best nonfiction titles tomorrow.) At at time when the economic horizon often seems to be contracting, the curiosity and imagination of authors know no bounds. It's amazing how far you can travel and how much you can discover, all for the modest price of a book.

"The Marriage Plot" by Jeffrey Eugenides
The title of this radiant work refers to the scholarly notion that, with the liberation of women and the acceptance of divorce, the story of a young person's struggle to find the right mate is no longer sufficiently consequential to carry a novel. Eugenides begs to differ. The romantic triangle he presents -- a woman undergraduate deciding between her smart, soulful friend and a brilliant but moody classmate -- unfolds against a mid-1980s backdrop that takes in poststructuralist theory, spiritual quests, bipolar disorder and biotechnology. Ultimately, though, it's a book about love, which still retains the power to inspire acts of breathtaking selflessness and to lay waste to the unwary heart.
READ SALON'S REVIEW

"Pym" by Mat Johnson
Comic novels rarely win a spot on lists like this, but Johnson's satire of modern (and not-so-modern) racial attitudes is so witty, inventive and audacious it also doubles as a novel of ideas. It begins with a disillusioned "blackademic" -- obsessed with Edgar Allan Poe's trippy proto-science-fiction novel, "The Narrative of Arthur Gordon Pym of Nantucket" -- failing to make tenure because he refuses to sit on the Diversity Committee at his small liberal-arts college. Then the story heads south, literally, after the narrator discovers that there may be some factual basis for Poe's book and he mounts an all-black expedition (including his best friend, a laid-off bus driver obsessed with Little Debbie snack cakes and a Thomas Kinkade-style kitsch painter) to Antarctica. What they find out there beneath the ice is even more bizarre than the path that leads them to it, yet, like Poe's novel, they will discover nothing more improbable than the divided nation they thought they'd left behind.
READ SALON'S REVIEW

"State of Wonder" by Ann Patchett
An ambitious present-day reimagining of Joseph Conrad's "Heart of Darkness," this novel recounts the adventures of an Indian-American research pharmacologist who is sent to a remote Amazonian village to check on a brilliant, wayward doctor. The doctor, a former mentor of the pharmacologist, is supposed to be finding the source of the villagers' extraordinary fertility -- even women in their 60s are able to conceive and bear children. If whatever enables them to do this can be bottled and marketed to rich, baby-craving Westerners, it will be worth a bundle. The game-changer in this story is that both scientists are women and only one of them is white. This switch overthrows the traditional colonial polarity of "civilized" Europe and "primitive" Africa and recasts Conrad's classic confrontation between nature and the developed world for a brand-new century. Add to that Patchett's vibrant re-creation of the Amazon in all its sweaty, buggy glory and the result is one of the year's most exhilarating literary achievements.
READ SALON'S REVIEW

"The Tragedy of Arthur" by Arthur Phillips
In this sparkling tribute to Nabokov's "Pale Fire," the main body of the novel describes the efforts of one "Arthur Phillips" to convince the world that a long-lost Shakespeare play purportedly discovered by his father is, in fact, a fraud. That Arthur's indictment of his dad (an incorrigible con man) also serves as the introduction to the first publication of said play suggests just how badly he's failed. The play, "The Tragedy of Arthur," an impressive Shakespearean pastiche, makes up the last quarter of the book, but the dazzle is all in the introduction, Arthur's attempt to explain how he managed to both alienate his beloved twin sister and unwittingly abet a father who believes that replenishing "the world’s vanishing faith in wonder" justifies a multitude of sins. And maybe it does. Unabashedly a book for people who know and love books (you're guaranteed to get more out of it if you're already familiar with the phrase "the anxiety of influence"), "The Tragedy of Arthur" is also a rueful acknowledgment of the difficulty of loving and being loved, and of the reckless leap of faith necessary to both.
READ SALON'S REVIEW

"The Pale King" by David Foster Wallace
Assembled for posthumous publication by Wallace's longtime editor, Michael Pietsch, this final novel by the most influential writer of his generation nevertheless feels surprisingly complete. (Given that Wallace liked to end his finished novels on an unresolved note, you can split the difference.) Its theme is the challenge of living a moral life in a capricious, affluent and flashy society, in which doing the right and necessary thing means facing not suffering but boredom. The characters -- a cast of idealists, low-profilers, Machiavellians and misfits -- all work at a Midwestern regional office of the IRS. Their work, while essential, is epically dull, and yet Wallace's exploration of their crises, intrigues, ecstasies and sorrows is anything but. Some parts of this novel are hilarious, others are heart-rending, still others attain beauty of a caliber we can't expect to see again any time soon.
READ SALON'S REVIEW

Although a conflict of interest prevents me from including Lev Grossman's "The Magician King" in this list (he's a friend), I'd just like to note that it's the rare middle book in a trilogy that's even better than the first. Other memorable works of fiction I read this year include Dana Spiotta's story of a man who fabricates the ephemera of an entire pop music career for himself, "Stone Arabia"; Lydia Millet's contemplation of the nature of responsibility, "Ghost Lights"; Alan Hollinghurst's decades-spanning examination of the legacy of a World War I poet, "The Stranger's Child"; Ali Smith's puckish social comedy about a dinner guest who barricades himself in his hostess' spare room, "There but for The"; Colson Whitehead's literary zombie yarn, "Zone One"; Haruki Murakami's metaphysical doorstop, "1Q84"; Justin Torres' lean and lovely coming-of-age collection, "We the Animals"; Helen Oyeyemi's feminist metafiction, "Mr. Fox"; Graham Joyce's eerie fable set in a deserted ski resort, "The Silent Land"; Neal Stephenson's outrageously entertaining digital-age thriller, "REAMDE"; and Elissa Schappell's candid and clever stories of young women at crossroads, "Blueprints for Building Better Girls." Like I said, it was a great year for fiction.