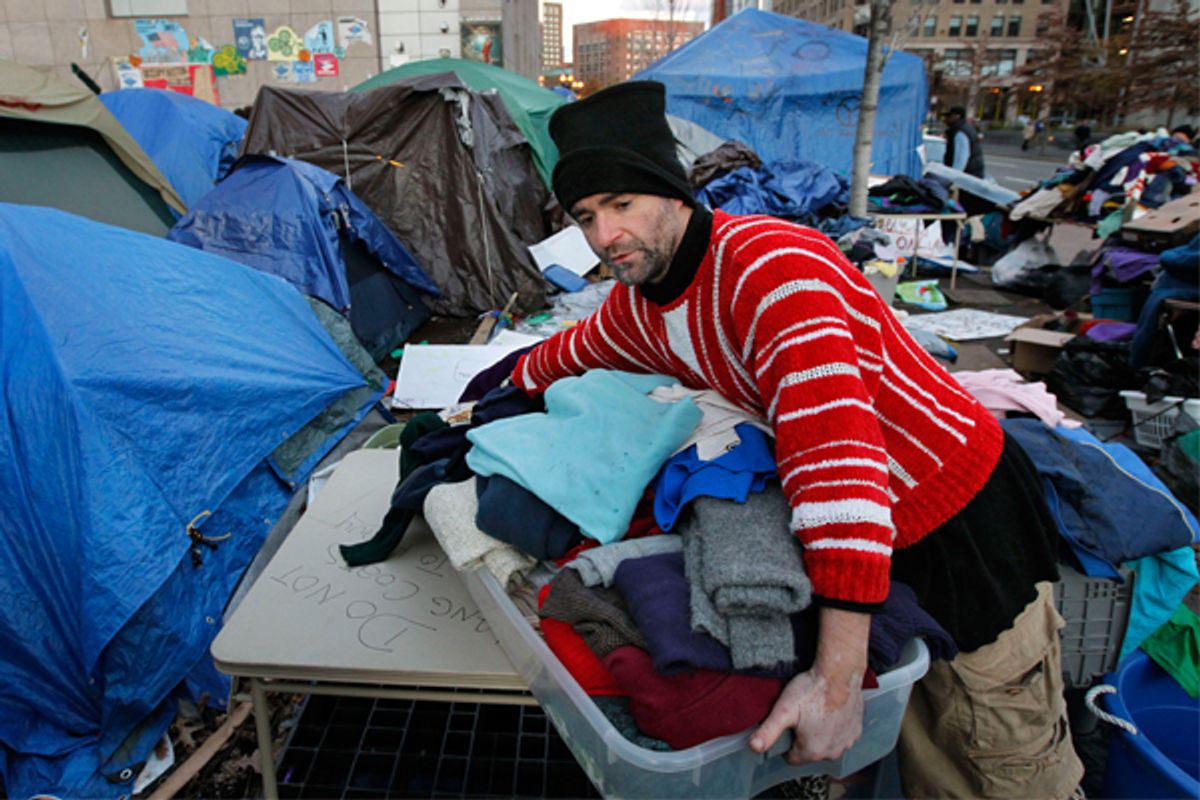 Occupy Boston on the eve of eviction (AP/Steven Senne)
--

John Ford, the camp librarian, was echoing a common sentiment among occupiers that the Boston mayor had played a deft hand politically by only pretending to be sympatico with their cause, all the while planning to remove their tiny tent town at his personal discretion, as a Suffolk Superior Court judge gave him the power to do, finally, on Wednesday

A beat down of some type seems unavoidable, quite possibly by Thursday night, and certainly by Sunday, according to rumors coming out of City Hall. Meanwhile, city officials are sticking to the official story line that they have no immediate plans to remove the protesters as some other cities have done, including New York City, Los Angeles and Philadelphia, but the protesters have all been put on notice that the nightsticks and pepper spray could fly any time.

“Tonight, if we don’t choose to fully decamp,” said Ford, “And not everyone is choosing to decamp.”

It was Ford who read from the court’s decision during its general assembly Wednesday night. He strained with every sinew to suppress his rage against the mayor for his two-faced charm offensive. Protesters uniformly felt Menino had been speaking from both sides of his mouth, fretting publicly about fire hazards even while preventing the campers from installing military-style fireproof tents that would've prevented fire hazards. Then Menino got the city fire marshal to do his bidding in court, describing the encampment as” a tinderbox.”

“They’re violent in New York,” Ford observed. “But here in Boston they’re much craftier about it. Here they've just been freezing us out slowly, and the levels of collusion were astounding, between the city inspectors who bound our hands, to the judge that said we were a permanent community."

Ford denied that. "We always said we were building a community that would be here as long as it was effective. “

The mayor had little choice but to show his chubby public face of patience to a fare-thee-well, if only because his Democratic working-class base supports the protesters wholeheartedly, according to a widely reported Boston Globe opinion poll.

In Boston the police have identified with the 99 percent more than their counterparts in New York City. One anonymous group — Occupy the Police — sprouted online from within the Boston Police Department. So it was all the more remarkable that Mayor Mumbles, as Menino is affectionately known, was able to depict the encampment as a peace-and-safety issue, a slowly escalating contest of wills between the filthy protesters and the ever patient Boston cops.

It was a story line that played well in the local media and a strategy that would ultimately win favor with Judge Frances McIntyre. The current restraining order was repealed, McIntrye ruled yesterday, “because while Occupy Boston protesters may be exercising their expressive rights during their protest, they have no privilege under the First Amendment to seize and hold the land on which they sit.”

“Soon, I hope,” said one cop on duty, smiling wryly, when asked by a protester when they were all going to get around to arresting one single banker.

"More than 5,000 occupiers jailed," the protester said. "And not a single banker? What's up with that, guys?”

The cop shrugged, flexing his nightstick, as if to say he knows who signs his paycheck: Why, Mayor Mumbles, of course.