Could his "independent advocacy" group please settle on one smear and stick with it? 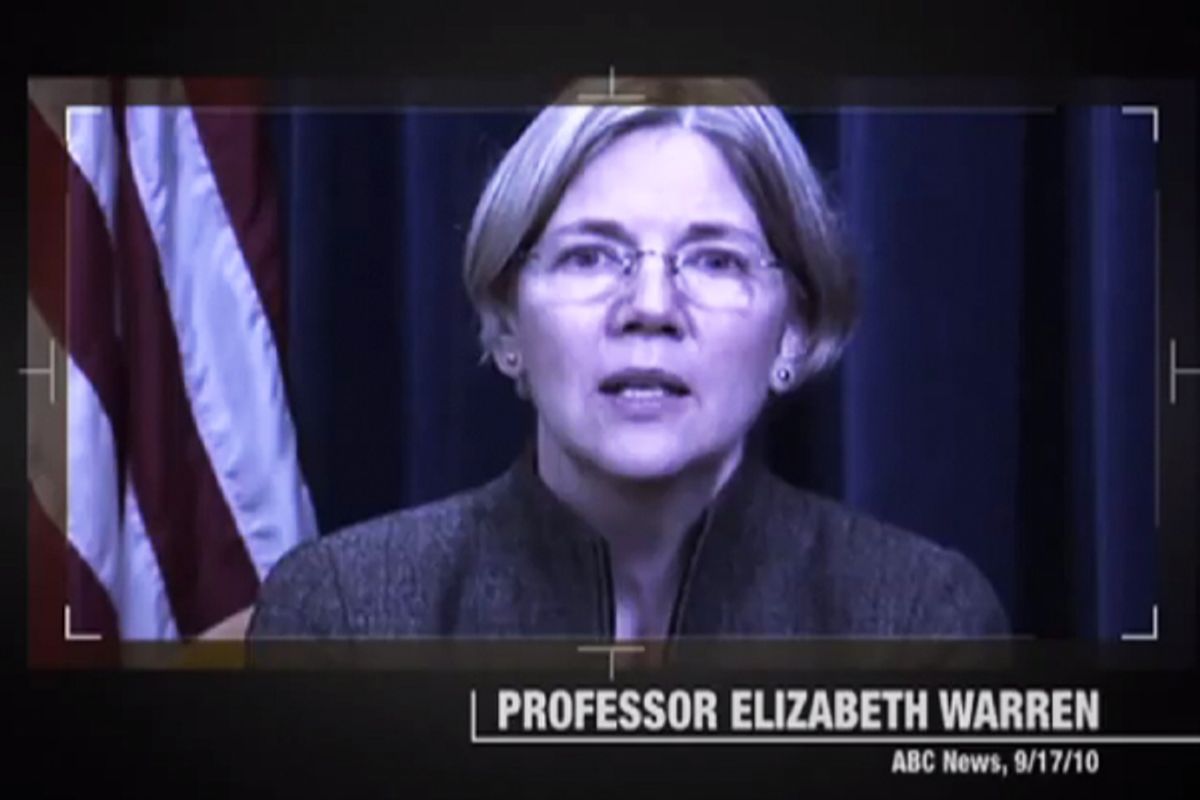 A month ago, Crossroads GPS, the 501(c) (4) group co-founded by Karl Rove, launched a television ad that warned Massachusetts voters of Elizabeth Warren's ties to the Occupy Wall Street movement -- a group of "extreme left protestors" who “attack police, do drugs and trash public parks. They support radical redistribution of wealth, and violence.”

The good news for Warren is that Crossroads seems to be done (at least for now) smearing her as a friend of violent Marxists and anarchists. The bad news is that they've settled on a different, seemingly contradictory attack: She's Wall Street's best friend! In a new spot, Warren is shown vowing to be "a voice in the room on behalf of middle class families." Then comes the voice-over, set against some ominous music:

Really? Congress had Warren oversee how your tax dollars were spent, bailing out the same banks that helped cause the financial meltdown – bailouts that helped pay big bonuses to bank executives while middle-class Americans lost out. Later, Warren went on a “charm offensive” with some of the same banks that got bailed out. Tell Professor Warren: We need more jobs – not more bailouts and bigger government.

The absurdity of this should be self-evident, but for the record: Warren was called in to oversee the distribution of TARP funds because of her demonstrated independence from the big banks. And the "charm offensive" refers to Politico's characterization of a speech she delivered to the U.S. Chamber of Commerce in March, when she was fighting to break the unified opposition of congressional Republicans and leaders from Wall Street and the business world to the idea of her heading the new Consumer Financial Protection Board. While she sought to strike a somewhat conciliatory tone in that speech, Warren hardly backed down from her long-standing criticisms of the financial service sector, saying of the 2008 meltdown: “Let’s not pretend that a billion-dollar Ponzi scheme is attributable to too much regulation."

Beyond that, Warren's status as the leading -- and maybe only -- Wall Street critic with Barack Obama's ear in 2009 and 2010 is well established. It's why Wall Street and its GOP allies teamed up to prevent her from running the CFPB, which prompted her decision to run for the Senate instead. And as a candidate, she's been shunned by financial service elites, which have instead lined up with Republican Sen. Scott Brown.

One way of interpreting Crossroads' new attack is as an admission that last month's ad failed. A new Boston Herald poll shows Warren opening a 7-point lead over Brown; the last Herald survey, at the end of September, put Brown up by 3. That said, Crossroads is pointing to a 9-point uptick in Warren's unfavorable rating -- from 18 to 27 percent -- as evidence that the first ad did serve its purpose.

In the end, the most significant recent development in the Brown-Warren contest could be one that has nothing to do with either candidate: The emergence of Newt Gingrich as a serious contender for the Republican presidential nomination. There may be no Senate race in the country where the difference between nominating Gingrich and nominating Mitt Romney is as significant as it is in Massachusetts. The state will vote for Obama either way, but Romney, a former governor, at least has the potential to keep the margin respectable, while Gingrich is a particularly poor match for what is a very blue state. With Newt at the top of the ticket, there may be no amount of spending from Crossroads that could save Brown.