In the latest twist on lobbying, Mideast autocracies repackage propaganda as "media awareness" 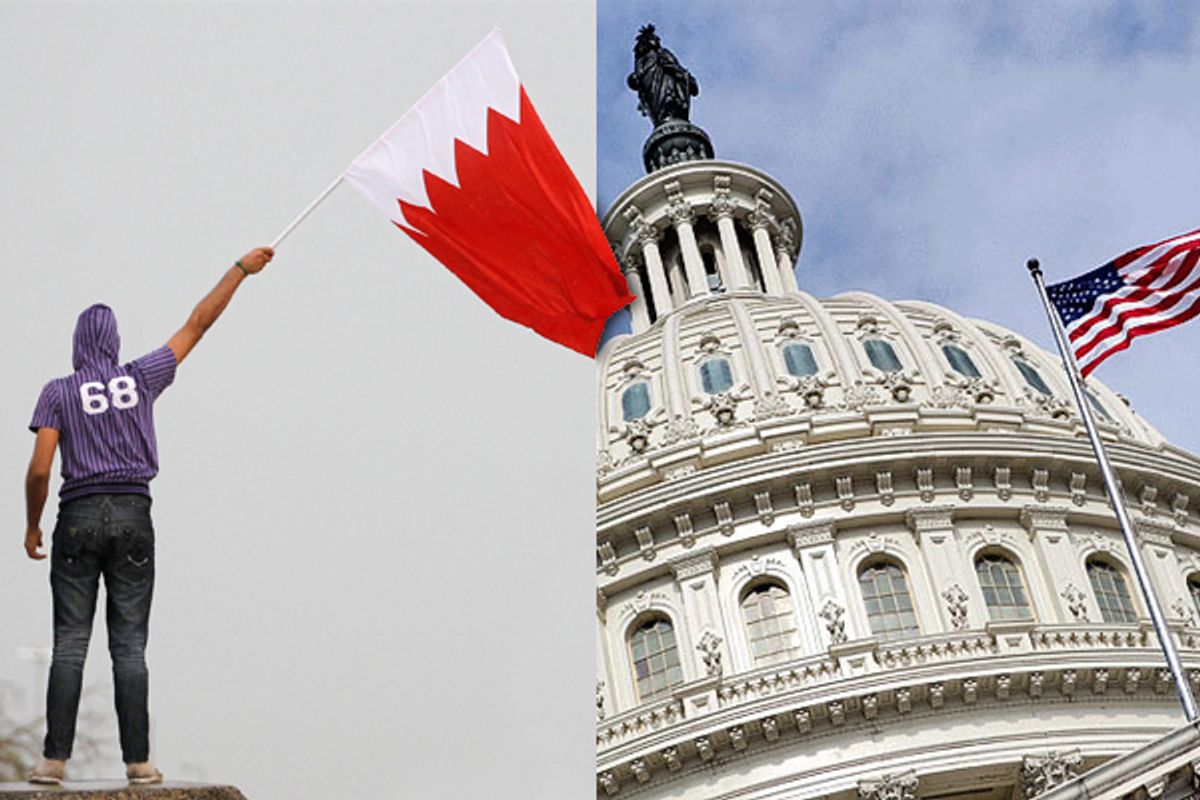 Ever since last February, when security forces in Bahrain brutally cracked down on demonstrators at the Pearl Monument, human rights groups have documented extensive violence by the government against pro-democracy protesters. In late  November, an independent commission hired by the country’s king released a report that said 35 people had been killed during the protests, including five detainees who were tortured to death, and that hundreds more had been injured and nearly 3,000 arrested.

But to judge from Tom Squitieri -- the self-described “stargazer, Award winning reporter, communications crafter” who has tweeted and blogged about events in Bahrain for Huffington Post and the Foreign Policy Association -- demonstrators are largely to blame for the violence. In one item he wrote about a girl named Zahra who “was attacked with an iron bar wielded by protestors” and a demonstrator named Ali who was killed “after being hit by a police car.” While Ali’s family claimed “he was deliberately run down” by the cops, Squitieri suggested it was more likely that “the police car swerved out of control after skidding on oil poured on the road by protestors.”

Squitieri states in his blog posts that he “works with the Bahrain government on media awareness and press freedom,” which is an odd way of describing work that amounts to propaganda. But unless you count his work at NewsMax, the right-wing media organization, Squitieri hasn’t been a journalist since 2005, when he resigned from USA Today for plagiarism. Nor does he mention anywhere that he is an employee of Qorvis Communications, a Washington firm that is registered to lobby for the government of Bahrain.

Traditionally, people think of foreign lobbyists as seeking to directly influence staffers on Capitol Hill and policymakers at the State or Defense Departments. But foreign governments have increasingly sought to augment this conventional mode of lobbying with other tactics that might be described as meta-lobbying.

Now lobbyists (for foreign and domestic clients) seek to advance their clients' interests in Washington through other means: making contributions to think tanks and universities; arranging for allegedly independent pro-democracy groups to shill for their bogus elections, funding bilateral business associations that focus on trade issues while advocating, directly or indirectly, for enhanced political ties; and influencing the media and public opinion by hiring American opinion-makers to mouth their talking points.

U.S. laws on traditional lobbying are flimsy enough, but these new meta-lobbying tactics are largely unregulated and free of disclosure requirements -- which of course makes them all the more effective and useful. As one Washington lobbyist told me, “Access lobbying is dead. Congress is gridlocked so meetings on the Hill are useless. Now it's all about perception and molding public opinion. That's why so many lobby firms have become integrated, and do so much work on the PR side."

The Washington influence business has been in overdrive recently, as the Arab Spring erodes (Syria) or shakes (Egypt) or destroys (Libya) the U.S. government's alliances in the Middle East. And even before foreign governments and their hired hands began scrambling to adapt to the region's democratic awakening, they had begun seeking to shape perception by hiring former journalists or paying influential “opinion leaders” to support their regime or their cause.

The departed Libyan leader Moammar Gadhafi recruited prominent academics and former officials through the Monitor Group of Cambridge, Mass., which was charging his regime $250,000 per month to burnish its image. Among those the Monitor Group lined up -- in exchange for big fees -- were historian Francis Fukuyama, the Middle East scholar Bernard Lewis, neoconservative Richard Perle (who twice traveled to Libya for meetings with Gadhafi) and professor Joseph Nye of Harvard, who also visited Libya and wrote a favorable story afterward for the New Republic. Nye also offered advice to Saif Gadhafi, the colonel’s son, on the dissertation he wrote for the London School of Economics.

Gadhafi also counted on support from the Washington-based U.S.-Libya Business Association. It was founded and financed by U.S. oil companies that were unhappy about the pace at which the Washington-Tripoli relationship was developing after George W. Bush’s administration forged a rapprochement with Gadhafi’s regime in 2004. Despite the political thaw, there remained strong opposition in Congress to Gadhafi’s regime due to his past support of terrorism. Meanwhile, European governments had been far less squeamish about embracing the colonel, giving their oil companies a leg up on American firms in the race to win concessions in Libya.

To supplement their stable of K Street lobbyists dedicated to improving ties with Tripoli, Occidental, ConocoPhillips, ExxonMobil, Marathon Oil, Chevron and other companies set up the USLBA. According to its federal tax filings, the association sought to “educate the public on the importance of US-Libya trade and investment, and facilitate the commercial and diplomatic dialogue between the two countries." At least seven of its eight directors were registered lobbyists for oil companies.

David Goldwyn -- who had served at the Energy Department under Bill Clinton and who then ran a consulting firm that provided “political and business intelligence” to oil companies -- was hired to head the group. The USLBA spent over $1 million between 2006 and 2009, of which more than $600,000 was used to pay Goldwyn’s firm.

In 2008, Gadhafi demanded that American oil companies help Libya win an exemption from a law signed by President Bush that allowed American victims of terrorism to seize assets of countries found liable for attacks. Libya was a specific target of the law. The USLBA was happy to help out. Working in close collaboration with official lobbyists for Libya and the oil companies, the association urged Secretary of State Condoleezza Rice to pursue a waiver for Libya, according to a recent Bloomberg story. Rice and three other Bush Cabinet members soon wrote congressional leaders saying that the exemption was needed or there would be “a chilling effect on potentially billions of dollars in investments by U.S. companies in Libya’s oil sector.”

Congress soon passed a measure that gave Libya the immunity it sought. Goldwyn, meanwhile, took a business delegation to Libya in December of 2008 and talked about the “fantastically warm reception” they received from senior government officials.

In 2009, Goldwyn joined the Obama administration as the State Department’s Coordinator for International Energy Affairs. He resigned earlier this year and returned to the private sector as an energy consultant. Goldwyn declined a request for comment about his work for Libya, other than to say, in response to a question about why he had never registered as a lobbyist for the USLBA, that he was not legally required to because he didn’t spend sufficient hours to trigger the disclosure rule.

The USLBA has seamlessly transitioned into the post-Gadhafi era. Its website bears no mention of the colonel and now carries news about the new government’s naming of an interim cabinet and the arrival in the U.S. for “urgent medical care” of two dozen wounded Libyan fighters. Never mind that they were wounded fighting the government of the association’s former pal Gadhafi.

Bahrain’s chief Washington lobbying organization is Qorvis, which also represents controversial autocratic clients such as Saudi Arabia and Equatorial Guinea. Qorvis doesn’t seem to do much for Bahrain (or its other clients) other than put out a steady stream of press releases at PR Newswire. For example, after Bahraini security forces in July raided the offices of Doctors Without Borders -- human rights activists allege this was part of the government’s effort to deny medical services to injured protesters -- Qorvis distributed a statement saying the medical group was to blame because it had failed to obtain the proper permit to operate in the country.

Such releases are not aimed directly at public opinion so much as at Google and other search engines. A steady stream of press releases serves to push news stories lower in search engine returns; when it comes to Qorvis’ clients, the news is almost invariably bad so burying it makes sense. “Qorvis’ releases are pure propaganda and it doesn’t even bother flogging them to journalists,” said the lobbyist cited above. “They just trot the stuff out so there’s something else to read on Google when one of their clients fucks up.”

Then there’s Squitieri, who has worked for a range of domestic and foreign clients through his own P.R. firm, TS Navigations. On the domestic front, he has helped -- according to his list of “key accomplishments -- “craft and lead the campaign to reposition Taser International from a severe crisis communication dilemma” and won an exemption for an unnamed tobacco processing company from “congressional legislation giving the FDA regulatory control over tobacco.”

On the foreign front he (like Qorvis) worked for the Kurdistan Regional Government, whose representatives he hooked up with journalists and “professionals in the wider communications community” including “sign and banner makers” and “event planners.” He also wrote speeches for Kurdish officials, like one delivered to the World Affairs Council in West Palm Beach earlier this year that had his Kurdish client quoting '60s Yippie Abbie Hoffman about the virtues of democracy.

For Bahrain, Squitieri tweets and blogs. He puts on airs of objectivity and impartiality yet his paymaster’s point of view, delivered in hackneyed prose, is obvious.

“As Bahrain wheezes and convulses in its uncertain steps," he wrote for Huffington Post, in October, "the gray is slowly emerging more in the reports of those spending at least a little time letting all the senses embrace.” He described Bahraini protesters seeking a more democratic government as being driven by “anger without a purpose” and called them “foot soldiers for puppet masters with a greater agenda,” referring obliquely to Iran. (Incidentally, the newly commissioned Bahraini government report said it found no evidence that the Iranians were behind the protests.)

Even though he works for Qorvis, Bahrain’s registered lobbying firm, Squitieri insisted in an email that he does not “engage in any lobbying.” He describes his work for Bahrain as “media awareness, media training and helping to identify possible stories.”

Asked why Squitieri’s blog posts weren’t identified as paid product for Qorvis, Matt Lauer of the firm said by email, “Tom's blogs are his own thoughts,  but he does disclose his affiliation with the government.”

Incidentally, the Independent of London reported this week  on a journalistic sting operation on Bell Pottinger, a major British P.R. firm that Qorvis works with on Bahrain. The sting -- modeled on a similar piece I did for Harper's several years ago -- involved reporters posing as agents of the government of Uzbekistan, who contacted Bell Pottinger to see if the firm would run a P.R. campaign on behalf of that country's dictatorial regime.

Bell Pottinger was keen to do so and gave a presentation to the undercover journalists during which it promised it would utilize the "dark arts" to influence public opinion for Uzbekistan. That included creating "third-party blogs" – which would look independent but be run by the P.R. firm -- that would, along with other tactics, help bury bad news about the country on Internet searches. "The ambition obviously is to drown that negative content and make sure that you have positive content out there online," a Bell Pottinger representative told the undercover reporters.

All of which appears to be the very model that Qorvis, with the help of Squitieri, employs on behalf of Bahrain.