Richard Cordray is no Elizabeth Warren 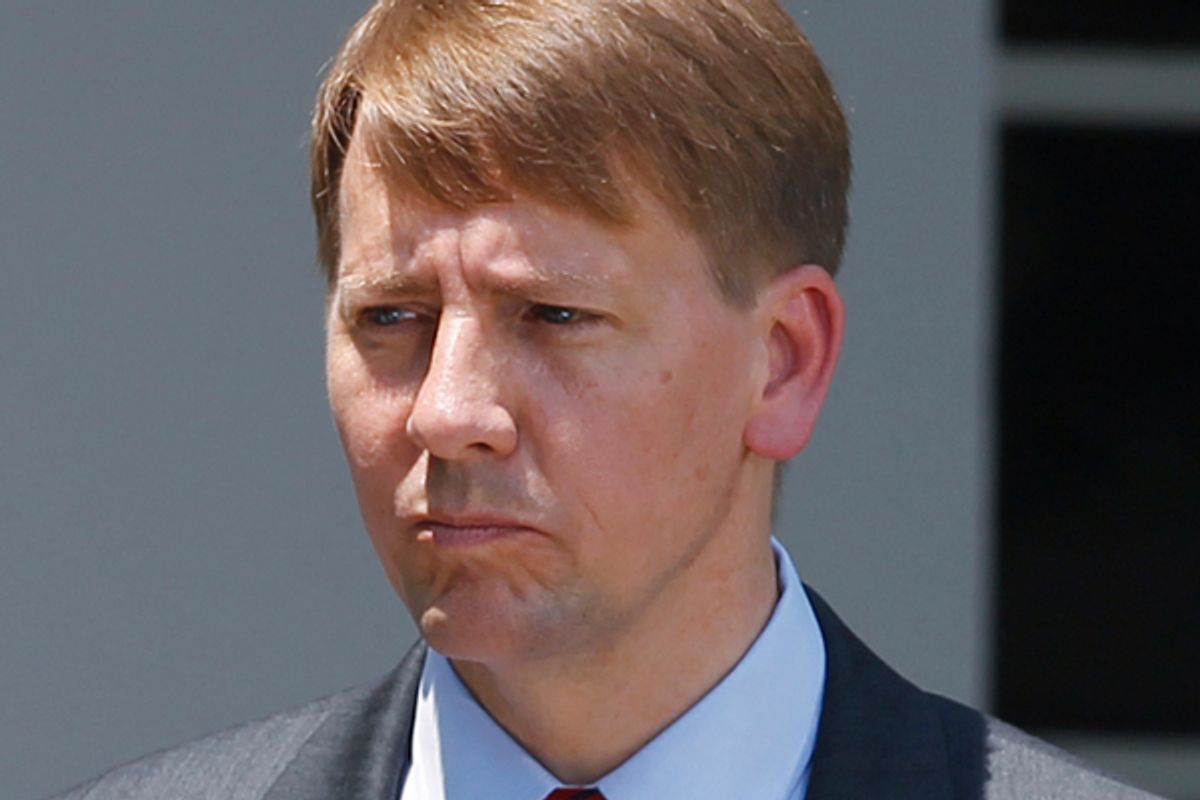 So it seems that we have a president at last. Not the president who’s been on the defensive, seeking compromise with uncompromising congressional Republicans, but the one the American people elected. A president who is taking a firm stance on core issues like jobs and taxes. We have a populist president!

In President Obama’s speech in Kansas on Tuesday, he made a passionate reference to Richard Cordray, his nominee as director of the Consumer Financial Protection Bureau, now the center of a fierce battle in Congress. “Nobody claims he’s not qualified,” the president said. “But the Republicans in the Senate refuse to confirm him for the job; they refuse to let him do his job.” That’s true enough. But the Death Valley of financial regulation is not a good issue for the president, no matter how atrociously the Republicans have behaved, most recently by their obstructionism on Cordray. Wall Street regulation is a dreary picture, and there isn’t an ounce of populism to be found in it.

As we all know, the Obama administration hasn’t prosecuted anyone of significance on Wall Street for their role in the financial crisis. It’s too hard, you see. So instead we have a consolation prize in the form of Cordray, a kind of suer-in-chief standing in the wings, ready to slam writs into the clammy hands of bankers and financial service types, with press releases at the ready, and P.R. people on standby. The CFPB is the new agency set up by Dodd-Frank for tackling the kind of nitty-gritty consumer issues that have been pretty much abandoned by the federal bureaucracy, such as unfair mortgages, debt collection, credit cards, payday lenders and other potential sources of pernicious practices.

Cordray was nominated to this position, itself a watered-down affair subordinated to the Federal Reserve, because Republicans effectively vetoed the founder of the agency, Elizabeth Warren. But as with most conciliatory gestures Obama has made to the Republican right, the response amounted to, shove it. Cordray’s nomination is in trouble, and he has become the current cause of the moment for Democrats in Congress. Obama is pushing hard for his man, we are assured.

The Kansas speech made that reasonably clear. But somehow it doesn’t make me feel any better about Obama’s approach to the Street, no matter how it might discomfit the likes of hedge fund magnate Leon Cooperman, who thinks Obama’s “tone” should be sweeter. To me, the Cordray nomination is emblematic of precisely what’s wrong with the Obama approach to regulating the financial services industry. It’s not a question of tone, which is perfectly fine, but substance.

There’s no question that Cordray is well qualified for his present post as the CFPB’s enforcement director. With a few years of seasoning he could probably step into the top job without any problem. He is a competent suer of people who ought to be sued, meaning pretty much every major bank and American International Group, when he was attorney general of Ohio. He won some really nice settlements. Here, take a look at his record. (He was kind enough to put all his lawsuits on a sheet of paper while he was still Ohio’s A.G.) Billions of dollars! Why, if this was 1960, that would be a lot of money.

But a hard-driving line attorney is not what’s needed in a job like this. You see, there is a symbolism to Obama’s fight with Republicans over the Consumer Financial Protection Bureau, a difference not of tactics or politics but a deeply philosophical struggle that goes to the root of how this nation should be governed. At issue is not the future of the CFPB, but whether we should regulate finance at all, or simply let the banks, debt collectors, etc., do what they want and let “the market” step in to correct unfair practices. That, after all, is the aim of libertarian-leaning types like Rep. Darrell Issa, chairman of the House Oversight and Government Reform Committee, and über-libertarian Ron Paul, who increasingly set the tone for their party.

What made Elizabeth Warren a fine choice for the job were the very qualities that got her tossed under the bus by Obama. She actually became a better choice as the opposition to her mounted and she stood her ground. She was a “polarizing” figure when she appeared before Congress. Perhaps the ultimate accolade came from the phony populist Paul, who called her a “socialist.” She wouldn’t take any bull from the Wall Street shills arrayed before her like overstuffed turkeys in Capitol Hill hearing rooms. Somehow, that very positive quality became a bad thing. So a few days after her last appearance on the Hill in July, Obama picked Cordray instead of Warren, who stood loyally by as he nominated her deputy for the job she should have gotten.

Take a look at the picture of this very nice and able man, read the generally glowing press coverage of this folksy, youngish, John Edwards-ish legal warrior, and ask yourself: Does this man have enough enemies to take on a job like this? Has anyone called him a “socialist” lately? Honestly, if we must have a symbol — a sacrificial lamb, perhaps, given the serious chances of defeat — if we are to have a Scopes in our generation’s Monkey Trial, can’t we have someone more worthy? More of a lightning rod? Instead, we read that Cordray squired his cute twin daughters around the Capitol. What’s needed is a trench knife, and he brings along the kiddies. As if he was on trial or something, which I guess he is.

In place of iconic, we got folksy. True, as Ohio A.G. he competently sued banks and even took on the rating agencies — though he lost that battle. But think of the other choices Obama could have made, potential appointees even less acceptable to the Republicans than the twin-squiring, glad-handing Ohio suer. Think of a steamroller like Eliot Spitzer, whose personal peccadilloes concealed the fact that he was easily the best adversary to face Wall Street since Pecora. Can you see Cordray blackmailing Wall Street execs, forcing them to change their ways? No way. True, you wouldn’t see him consorting with prostitutes, either, but he’s up for a job that requires a street fighter, and a dirty one, not a clean-living family man.

Cordray could be a competent deputy to a maniacal genius like Rudy Giuliani, another fine choice if he were a few years younger and hadn’t morphed into a RWNJ. How we forget that before he became the overhyped “nation’s mayor” and presidential candidate, Giuliani was a kick-butt prosecutor who would stop at nothing to nail his target.

Neither Spitzer nor Giuliani were choirboys. They were mean, rotten SOBs. In other words, they were just what you’d want to take on rapacious credit-card overchargers and their ilk, because there was a streak of badness in these law enforcers. (Forget what you read about Eliot Ness — I’ll bet he was a wife-beater with an opium habit.) These momsas share with Elizabeth Warren the kind of bulldog tenacity that literally terrified everybody with whom they came into contact when they were in their respective positions.

I’m sorry, but Richard Cordray isn’t anything like that. He ought to be Fighting Rick Cordray, the Foul-Mouthed Scourge of the Plains, but he isn’t. Sure, Spitzer and probably even Giuliani wouldn’t stand a hornet’s chance in hell of getting confirmed. But it would have been a war cry, a “Currahee!” to rally the troops. After all, our man from Ohio stands an awfully good chance of not getting confirmed, twins notwithstanding. His primary virtue, aside from being the warm body Obama offered up to Congress, is that he is a cut above the lemons Obama has picked for economic and regulatory posts since 2009.

Cordray is not an appalling choice like Timothy Geithner, who was far too close to major bankers while he was New York Federal Reserve chief, and brought that same institutional fealty to the Treasury Department. He’s not anywhere near as horrid as Geithner’s former boss Larry Summers, who along with Bob Rubin was an architect of bank deregulation during the Clinton administration. He’s not a bad joke like Mary Schapiro, who was the overpaid CEO of the Financial Industry Regulatory Authority before being appointed to head the bureaucratic albatross known as the Securities and Exchange Commission.

I’m still pulling for Cordray, misgivings notwithstanding. He’s lame, but he’s all we’ve got. I hope that the process of getting past the congressional meat grinder is an ennobling experience for him. Maybe it will put some steel down his spine if he gets the job. Maybe he’ll leave the twins with the sitter next time and try some choke holds.

Meanwhile, I have three words for President Obama: think recess appointment. Then he can really call himself a populist.