The automaker is hiring workers and reopening assembly plants, but that's no guarantee of future good behavior 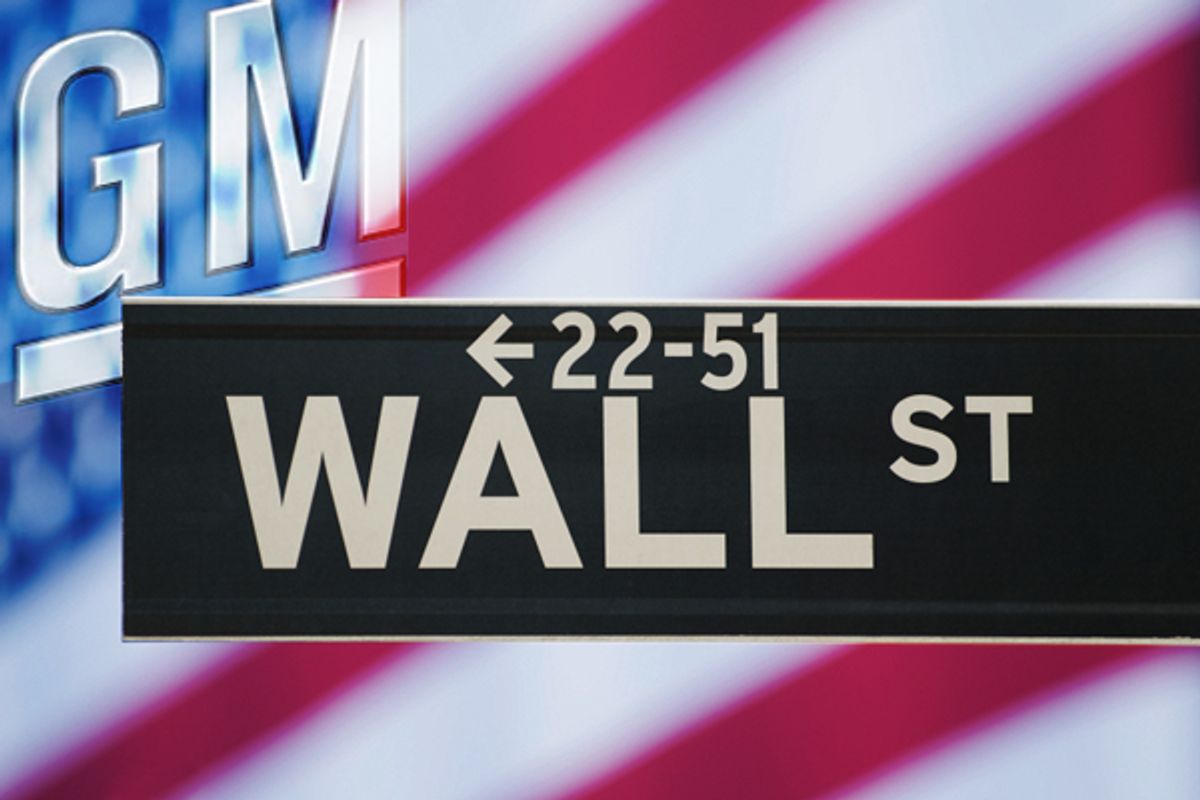 As an advertisement for a successfully executed government bailout, General Motors passes with flying colors. After an injection of $50 billion from the federal government, combined with a structured bankruptcy that allowed it to shed debt and cut labor and pension costs, General Motors returned to profitability far faster than even the most bullish socialist interventionist might have expected.

The company is reopening shuttered manufacturing plants and hiring workers at a healthy pace, and even signed a deal with the United Auto Workers in September that will result in higher wages for the new, lower-class tier of workers that was created as part of the bankruptcy process. And after years of resisting the hybrid wave and ridiculing the very notion of an electric car, the automaker is also finally moving aggressively on the green front with its showcase Chevy Volt.

But when we try to evaluate General Motors as a responsible corporate citizen, the calculus gets a little tougher. The U.S. government still owns 33 percent of GM, and that constrains the company in some meaningful ways that are clearly causing irritation to GM management. The company is adding jobs in the U.S. but the majority of its sales, profits and employees are now overseas. If the U.S. domestic market is just a minority share of GM, should the company even be considered an American citizen?

In comparison with its fellow bailout lucky duckies -- the big banks -- GM scores high. The company isn't actively forcing Americans out of their homes, attempting to scuttle regulations aimed at preventing a repeat of the financial crisis, or claiming that the president is anti-business or waging class warfare. General Motors' survival is unquestionably good for Michigan, the Midwest and the entire auto industry supply chain. There's a reason why Ford's CEO, Alan Mulally, supported the bailout of his competitor: If GM had been liquidated, thousands of suppliers who also make parts for Ford would have collapsed.

But you can line just about anybody up with the likes of Citigroup or Bank of America and they'll look pretty good. A closer review of General Motors' record reveals some significant warts.

But we're not, because GM's relative moderation is through no good fault of its own -- it's a result of pay caps that apply to GM's top 25 executives owing to the fact that the U.S. government still owns one-third of the company. And Akerson is not happy about the caps. In November he complained that the pay limits wouldn't allow GM to give bonuses to its top executives, warning that "we've got some very, very good people that could do well at other companies who are doing this one for the home team."

There's also something disconcerting about the sight of a company that is partly government owned spending taxpayer dollars to lobby the government on policy issues. In 2010, GM spent $10 million lobbying the government on a variety of auto-related issues. Perhaps most objectionably, as a member of the Alliance of Automobile Manufacturers, GM lobbying dollars backed the trade group's opposition to stronger fuel economy standards.

According to a study conducted by Michigan's Center for Automotive Research, the bailout of GM and Chrysler saved around 1 million jobs, if you add up all the downstream effects that liquidating the automakers would have had on the supply chain and local economies. So just GM's mere survival deserves high marks.

The company itself has registered modest growth in United States employment since its post-bankruptcy low. In July 2009, GM's payroll included 88,000 American employees and the company projected that its workforce would be reduced by another 20,000 by the end of the year. But by the close of 2010, the payroll had started climbing again, to 79,000. And as sales and profits have continued to grow throughout 2011, there have been numerous press reports of reopened assembly plants and rehired workers. All of this is good news for the U.S. economy.

But increasingly, the United States is becoming a minority partner in GM's overall business. GM's total North American payroll counts 96,000 employees, but Europe, Asia and South America together add up to 103,000 workers. A whopping 73 percent of GM's sales are generated overseas.

And, as GM is quick to point out, emerging markets like China, Brazil and India are where the prospects are brightest for future growth. So the true success of GM's bailout is in allowing a company that is headquartered in Detroit to accelerate its sales of cars that are made in China, by the Chinese, to the Chinese.

Taking all these factors into account, Salon's grade for General Motors is a provisional C. The company is building cars in the United States and employing American workers and is more environmentally responsible now than it's ever been, and all that is good. But we'll be watching very closely to see what happens when the U.S. government is no longer a minority owner, and the automaker is free to do as it pleases.