Right-wing intellectuals have turned on Gingrich. They\'ve also realized he\'d be terrible in a general election 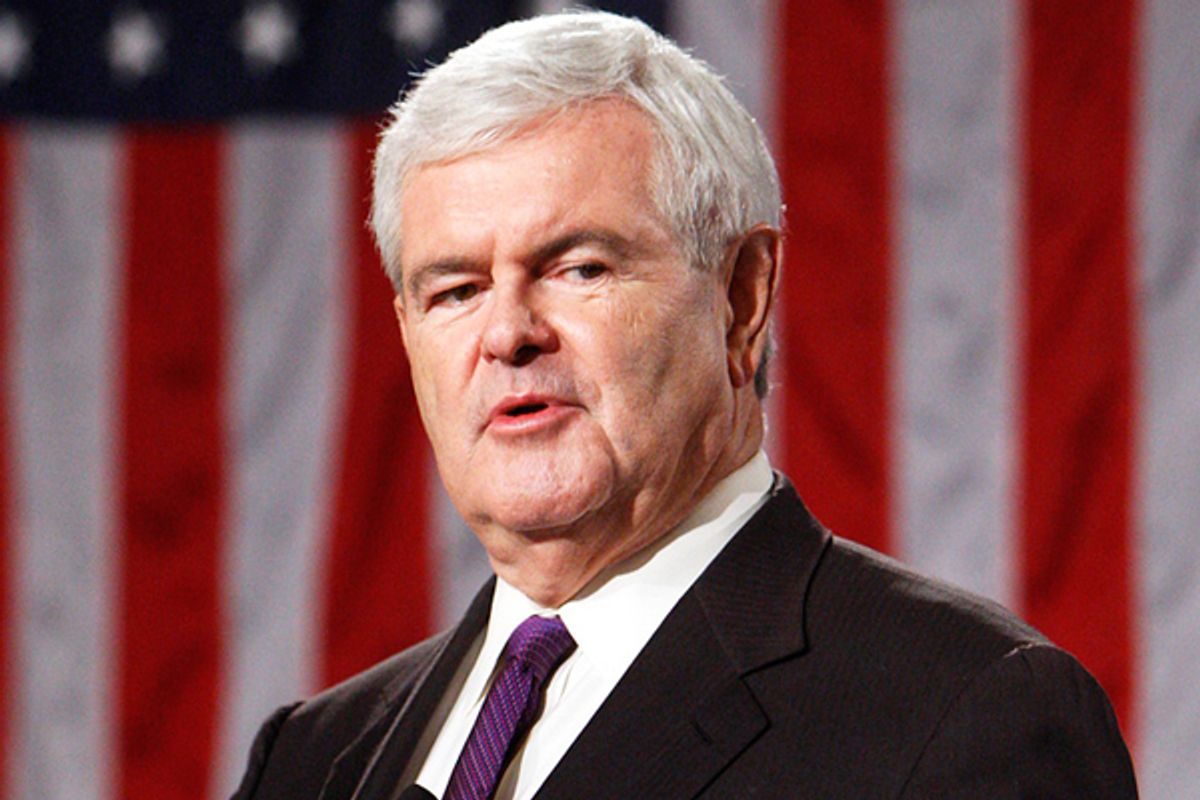 Newt Gingrich is the Jimmy Swaggart of American politics, a confidence man so transparent as to test the faith even of True Believers. Paradoxically, that’s precisely why the disgraced former speaker looks a good bet to secure the GOP presidential nomination.

Not seeing through Gingrich’s bare-faced mendacity requires an effort of the will so profound it can only be accomplished with the aid of strong countervailing emotions — essentially the envy, resentment and fear that right-wing media have fomented among the faithful ever since the election of President Clinton and the 1994 “Contract With America.”

This only makes the horror of intellectually inclined conservatives at the prospect of Newt’s ascendancy more remarkable. Where have they been all this time? Back in 1994, Gingrich and Frank Luntz circulated a list of hurtful words conservatives should always call liberals. “Traitors” was at the top, also some that sound particularly ironic today: “waste,” “corruption,” “self-serving,” “greed,” “cynicism,” “cheat,” “steal” and “patronage.”

To the Washington Post’s resident Tory George Will, Gingrich “embodies the vanity and rapacity that make modern Washington repulsive.” To his colleague Charles Krauthammer, it’s Newt’s faculty lounge-lizard side — his half-baked intellectual pretentiousness — that’s most disturbing.

Not himself a particularly modest fellow, Krauthammer writes that “Gingrich has a self-regard so immense that it rivals Obama's — but, unlike Obama's, is untamed by self-discipline.” He finds Newt’s “[t]hinking of himself as a grand world-historical figure, attuned to the latest intellectual trend” downright comical.

Will too lampoons Gingrich’s “intellectual hubris” and “enthusiasm for intellectual fads.” He levels the ultimate insult, correctly asserting that Newt “would have made a marvelous Marxist, [believing] everything is related to everything else and only he understands how.”

To his credit, Will focuses upon what’s perhaps Gingrich’s single most despicable moment, a 1994 election eve attempt to blame a South Carolina mother’s drowning of her children on Democrats. Never mind that Susan Smith allegedly turned out to have been abused by her Republican stepfather. Politics had nothing to do with the tragedy.

What Will calls Gingrich’s “grotesque opportunism — tarted up as sociology” has been his entire stock in trade for years. He made similarly absurd observations about the 1999 Columbine High School tragedy. To him, two teenagers who massacred 13 of their classmates with automatic weapons became somehow the fault of liberal Democrats.

And so it goes. In 2010, Gingrich wrote a book arguing that the Obama administration “represents as great a threat to America as Nazi Germany or the Soviet Union once did.” Earlier this year, he told a Texas church gathering that he feared his grandchildren would grow up “in a secular atheist country, potentially one dominated by radical Islamists and with no understanding of what it once meant to be an American.”

Because the president of the United States, of course, is secretly a radical Muslim whose “Kenyan, anti-colonial” views lead him to seek revenge on behalf of the African father he hardly knew. Newt said that too.

Two thoughts: First, it’s a straight line from this kind of intellectual promiscuity to the other kind Newt’s also famous for — serving divorce papers on Wife 1 while she was hospitalized for cancer in favor of Wife 2, whom he subsequently abandoned for the bejeweled Callista, his mistress of the Clinton years, who, as Wife 3, hovers over him relentless as a bird of prey. A 68-year-old Catholic convert, Gingrich once blamed his misbehavior on too much hard work motivated by patriotism. They practically dare you to laugh, those two.

Second, the Chicago Tribune’s estimable Steve Chapman captured the essence of Gingrich’s appeal to the GOP’s propagandized base: “Demonizing adversaries is what he does best. Some on the right don't want a conservative so much as they want a hater. Gingrich is their dream come true. Romney shows no flair for irresponsible hysteria and crude smears — and many count that as a serious flaw.”

All three columnists agree that Newt would prove a fatally flawed candidate in the general election. “Even if Gingrich can win over most Republicans,” Chapman writes, “he is bound to repel everyone else.”

Indeed, faced with him as the nominee, many conservatives would privately hold their noses and vote for Obama. “Bigfoot dressed as a circus clown would have a better chance of beating President Obama than Newt Gingrich, a similarly farcical character,” one anonymous Republican told Washington Post blogger Jonathan Bernstein.

Certainly welcome, this principled scorn comes a bit late. Few on the right have been willing to confront the reality that conservatism in the classical sense scarcely exists anymore in the United States. It’s long been replaced by the Yahoo dogmatism of a huckster like Gingrich, and it looks increasingly as if we’re all going to have to live with the consequences.