Newt Gingrich and the other meaning of "Rockefeller Republican" 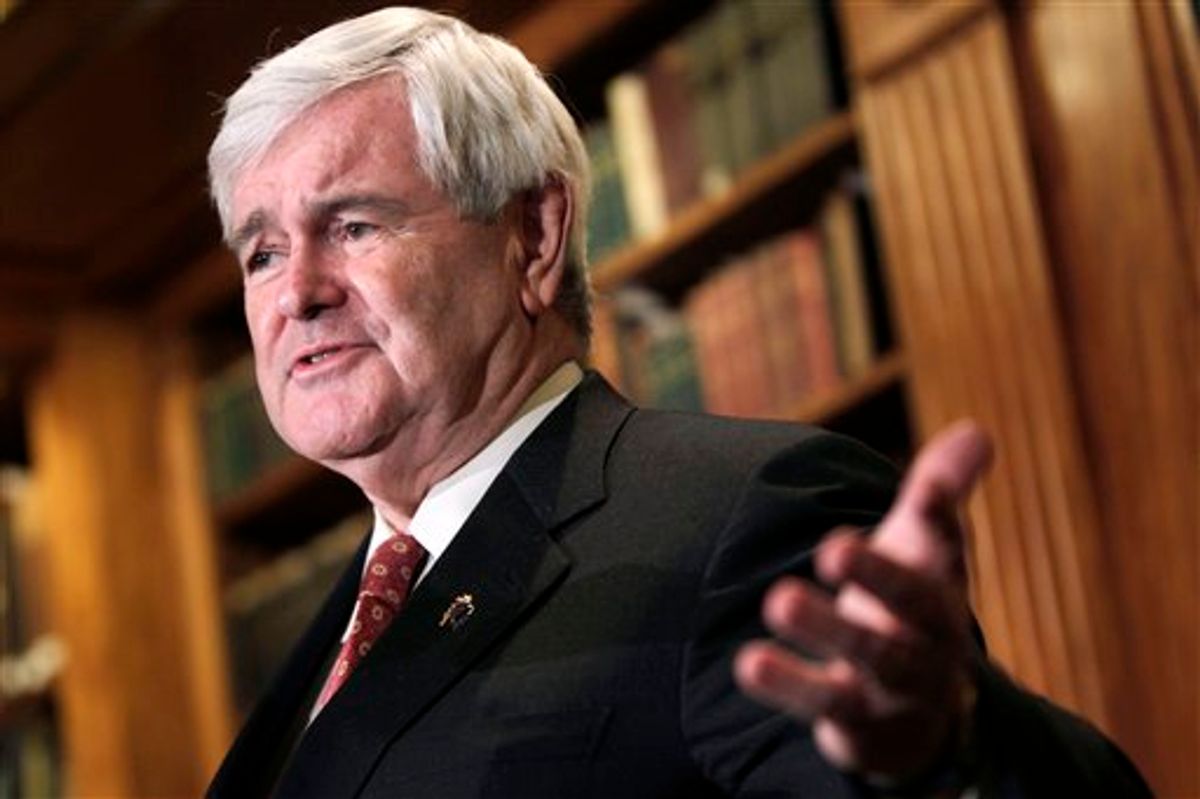 Nelson Rockefeller, the failed White House aspirant and former New York governor who served as Gerald Ford’s appointed vice president, has been dead for more than 30 years. But in a strange way, he’s now haunting the Republican presidential race as it enters the pre-Iowa stretch drive, with each front-runner trying to tar the other with one of the liabilities that sunk Rocky’s presidential dreams.

Mitt Romney’s Rockefeller problem is well-established. Many on the right suspect that his real policy instincts are consistent with the old moderate-to-liberal wing of the Republican Party that Rockefeller embodied. The parallel isn’t quite exact – Rockefeller made little effort to mask his liberalism when he vied with Barry Goldwater for the 1964 GOP nomination, while Romney has strained to paper over his economically centrist and culturally liberal Massachusetts past – but the skepticism is very real. It’s why the vast opening that Newt Gingrich is now exploiting exists – as Gingrich well knows.

“He’s a very likable person,” he recently said of Romney. “He works very hard. He’s very smart. And he is a Massachusetts moderate Republican. It is the Nelson Rockefeller problem. I mean, there is a natural ceiling.”

But Gingrich’s effort to play the Goldwater role is complicated by his own common ground with Rockefeller, who was also undercut by his scandalous personal life.

Just two years before the ’64 race, Rockefeller and his wife of 32 years divorced, an unnerving development to many voters of that era. Far more damaging, though, was his prompt remarriage to the much younger woman with whom he’d been having an affair, Margaretta “Happy” Murphy, something that was widely seen as a cruel and selfish act.

Rockefeller nonetheless set out to seek the GOP nomination, with his personal conduct burdening him every step of the way -- especially when news that his new wife was going into labor broke days before the pivotal California primary. As Rick Perlstein described in “Before the Storm,” his account of the rise of the Goldwater movement, Rockefeller had been set to deliver a major address at Loyola University in Los Angeles – until Cardinal Francis McIntyre publicly revoked the invitation, citing Rockefeller’s disregard for the sanctity of marriage. Goldwater’s upset California victory ended whatever hopes Rockefeller had of winning the nomination.

There have been plenty of divorced presidential candidates since Rockefeller, and three of them – Ronald Reagan, Bob Dole and John McCain – even managed to secure the GOP nod. But like Rockefeller, Gingrich stands out for the breadth and severity of his extramarital sins. He’s had three wives, each new relationship evolving from an infidelity – one of which took place while he was leading an impeachment drive against Bill Clinton for conduct related to an affair. The old story of Gingrich supposedly badgering his first wife about details of their divorce while she was in the hospital recovering from cancer continues to damage his image. And the wife he left for his current, much-younger one has gone public with devastating details of his behavior toward her.

What makes this especially problematic for Gingrich is that the same conservative true-believers he’s relying on – the ones who are most likely to see Romney as a Rockefeller Republican – tend to be most offended by such licentiousness. Gingrich’s defense is a redemption story, a claim that his third marriage and recent conversion to Roman Catholicism have given him maturity and wisdom. Some Christian conservatives seem ready to accept this.

But there’s plenty of skepticism, too – and the potential for it to grow if Gingrich’s dirty laundry gets an even higher-profile airing. So Romney’s campaign is now aggressively trying to paint Gingrich as the other kind of Rockefeller Republican.

In an ad released earlier this week, heartwarming images of Romney with his wife and children are shown as Romney talks about his 42 years of marriage to the same woman and how “if I’m president of the United States I will be true to my family, my faith and my country.” Chris Christie, one of Romney’s top surrogates, then advanced this theme on a campaign swing in Iowa, saying that Romney “is a guy who is a father and a husband and loves his wife and his kids.”

And Romney is getting some unintentional assists, too. Rick Perry, who would like to supplant Gingrich as the conservative movement’s default non-Romney option, noted on Thursday that “I didn't make an oath just to my wife. I made an oath to God when I married my wife. I think it's an important issue.” And a Christian pastor in Iowa who is backing Rick Santorum is promoting a scathing web video that brands Gingrich “the Kim Kardashian of the GOP.”

“If Newt Gingrich can betray a woman who has sworn her love and loyalty to him not once, but twice, what makes you think he won’t betray you?” the video asks.

For now, Romney’s Rockefeller problem seems more damaging than Gingrich’s, but it’s still early – Gingrich has only been the front-runner for about a week and Iowa is still nearly a month away. But if the choice does come down to Romney and Gingrich once the primary season begins, it will be ironic: Even though the party has moved as far to the right as it’s been since 1964, the GOP nominee will end up being a Rockefeller Republican.