The assault on Israeli women's rights 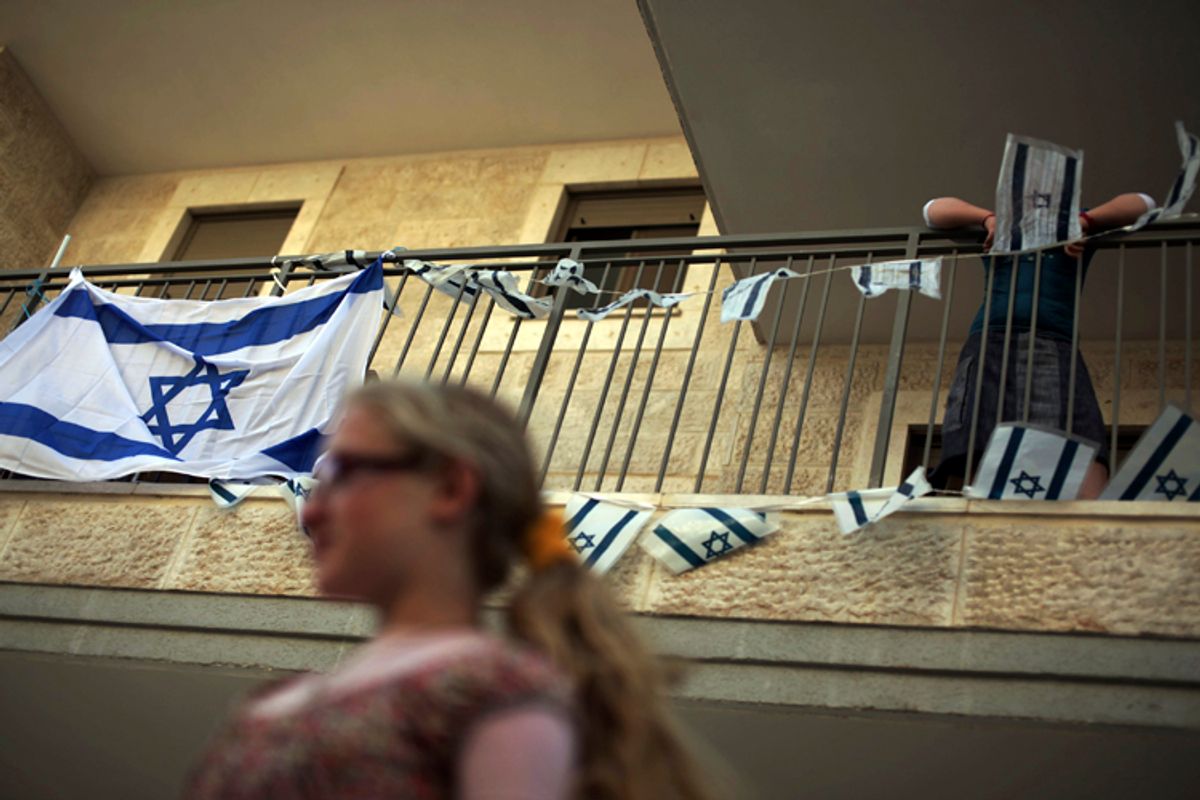 A woman walks past an Israeli flags hanging on a balcony before a ribbon-cutting ceremony at a recently built Jewish settlement in the East Jerusalem neighbourhood of Ras al-Amud May 25, 2011. (Reuters)
--

JERUSALEM — The subject of a women’s place in public dominated Israel’s headlines this week after a series of incidents highlighted what some say is the growing repression of Israeli women.

The Israeli army, in which women have served since the establishment of the state, has been the focal point of the concern, as it came to light that religiously observant male recruits have walked out of ceremonies in which female singers have performed, claiming it offended their understanding of modesty.

There is a universal draft of 18-year-old men and women in Israel, though a strongly guarded practice allows religious men studying in seminaries an exemption. The current clash is between the army’s tradition of gender equality and new, religious recruits who are asserting their values.

In addition, an incident involving Chany Ma’ayan, a professor of pediatric medicine at Hadassah University Hospital, made headlines when it was revealed that last September she was awarded a prize by the Ministry of Health but, following the directives of Deputy Minister of Health Ya’akov Litzman, an ultra-Orthodox Jew, and unlike the male winners of the same prize, was not invited to the stage to receive the award.

The episode caused Orthodox women, in particular, to express indignation at the growing extremism of religious men in public life.

“This was a public event involving a deputy minister of state,” said Dr. Hanna Kehat, the director of Kolekh, an organization of professional religious women, in an interview with Israel Radio. “This is an incidence of gross discrimination, which is prohibited by law and it is difficult to believe actually took place. We are advancing at a rapid pace toward Iran.”

In part, these events reflect a growing boldness on the part of religious figures in Israel. On the other hand, said Molly Malekar, the director of the Counseling Center for Women, in an interview with GlobalPost, “This is a backlash against the growing role of women in Israeli public life and recognition for women’s causes.”

“Two women now head major political parties [Tsipi Livni, head of center-right party Kadima, and Labor Party leader Shelly Yachimovich], and a third woman is poised to lead Meretz [a small left-wing party.] A woman is president of the Supreme Court and is specifically targeted by these elements. Women’s issues have advanced significantly in society, even to the point where a former president is going to jail for sexual assault. So part of what we are seeing is an inevitable backlash to women’s advancement. The backlash is not coincidental.”

The controversy acquired special resonance after the discovery, several months ago, that posters advancing a national drive for organ donation contained female figures in Tel Aviv, and only male figures in Jerusalem.

The variance caused an outrage, and the National Transplant Center, which had acquiesced to pressure by religious leaders, was forced to apologize and now, at significant expense, is reposting its ads in the capital, with women included.

“The ultra-Orthodox — though it’s important to emphasize that not all of them — are coming at this from a mistaken point of view, in which they see the conflict about women’s role in public life as a clash between faith and lack of faith, between ideology and a way of life. The truth, of course, is that the conflict is between two faiths,” author, television personality and social commentator Yair Lapid told GlobalPost.

Referring to a fiery front-page editorial he published in the daily Yedioth Acharonoth, Lapid said, “I chose the word “sacred” to underscore the fact that women’s equality is part of the faith of every liberal human being. Like any religious faith (and it is easy to forget that even Judaism is not a faith but, like every other religion, simply a certain practice of faith), for us too, there are certain issues that are more or less important, and the ultra-Orthodox have to understand that they are treading here upon one of the absolute red lines of any free person.”

GlobalPost attempted to get a response from each of the ultra-Orthodox members of the Jerusalem City Council, but they all refused to respond to any question on the subject of women in the public sphere. One spokesman, who requested anonymity, said the issue was “quicksand” for any ultra-Orthodox politician.

How has Israel reached this point? Among other things, ultra-Orthodox society, a minority within the Israeli population, has outsized influence in the nation's political and partisan sphere due to the fragile coalitions that form Israeli governments, which often require kingmakers from minority parties. In addition, unsettling changes within ultra-Orthodox society are causing some to retrench.

The emergence of Kehat's organization of professional Orthodox Jewish women is but one symptom of this phenomenon. And as Orthodox women demand greater freedoms, some young men too are choosing lives of interaction with the secular world, either through army service or through the labor force in the place of life-long religious studies.

Parallel to these shifts, the majority secular population, inspired by last summer’s social protest movement, is increasingly impatient with traditional military and tax exemptions guaranteed to only the ultra-Orthodox, made possible by their political parties’ ultimatums.

“The burden is unfairly shared,” became one of the demonstrators’ mantras.

Then, of course, there is good old social passivity.

“It’s come to this because we forgot that every religion is by its nature imperialistic,” said the secular Tel Avivi Lapid.

“We erred in thinking that there is a point at which even the extreme ultra-Orthodox will realize that we have given enough up, that there is no need to continue attacking the status quo, that this conflict can be de-escalated. But it just doesn’t work this way when facing the kind of religiosity that has developed in certain ultra-Orthodox quarters. From their point of view, each and every secular person is an infant, and their dialogue with us is not earnest but purely tactical. They stop only when they have no choice, and always march toward their ultimate goal: that everyone will be like them.”