The Newt thing gets even more serious

His rivals came at the new front-runner hard on Saturday night, but Gingrich walked away as strong as ever 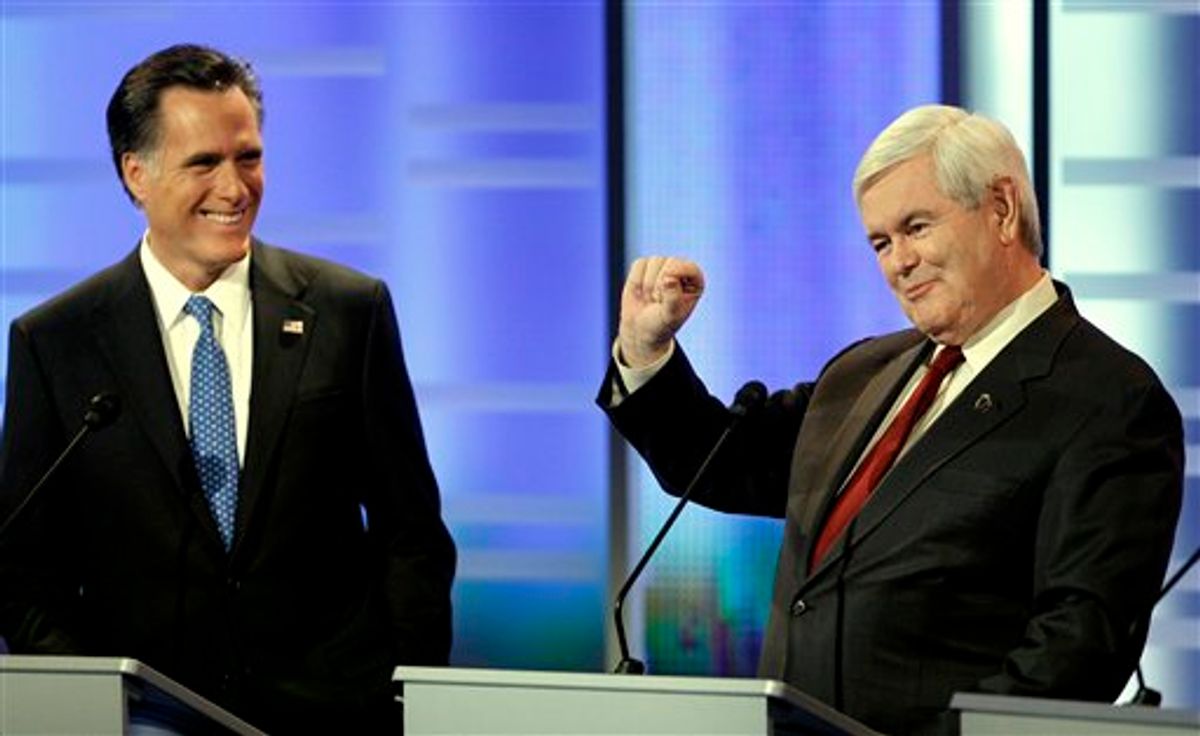 If you scored it on points, the outcome of  Saturday night's Republican presidential debate, the second-to-last before the January 3 Iowa caucuses, was muddled.

Each of the six participants had a strong moment or two. Rick Perry provided what was, by far, his best performance in a debate, Michele Bachmann memorably disparaged the race's two front-runners as "Newt Romney," Ron Paul received some unlikely praise from rivals who in the past have preferred to use him as a punching bag, and Mitt Romney addressed his privileged upbringing with surprising deftness. Even Rick Santorum managed to stand out by challenging his opponents' support for a payroll tax cut extension

And yet there was a clear winner: Newt Gingrich.

There are two reasons for this. The first is that Gingrich held up well under the spotlight and scrutiny -- far better than Perry and Herman Cain did when they came to debates earlier this fall as newly minted front-runners. The attacks on Gingrich, who has opened up double-digit leads in Iowa (and in South Carolina, Florida and national surveys), started early and were leveled by all of his opponents. Romney, egged on by moderator George Stephanopoulos, went first, reeling off a list of criticisms.

"We can start with his idea to have a lunar colony that would mine minerals from the moon," he said. " I’m not in favor of spending money to do that."

Romney further chided Gingrich for advocating the elimination of the capital gains tax, arguing in favor of changing child labor laws to allow inner-city children to do janitorial work in schools, and being a career politician. "I've spent my life in the private sector," Romney boasted.

Gingrich's response demonstrated why he may have a lot more staying power than Perry, Cain or any of the other Romney rivals who surged and faded this past year. He was calm, forceful and confident and methodically worked his way through each point. He also landed a real punch, something Romney's foes have struggled mightily, and often comically, to do in debates.

Gingrich took the lunar colony shot and turned it into a spirited call for young people to pursue careers in science and a frustrated lament over the direction of NASA's space exploration program. On the capital gains issue, he accused Romney -- who says he wants cuts targeted to benefit the middle class-- of favoring less relief than Barack Obama. On the child labor question, he proclaimed that "I'll stand by the idea: Young people ought to learn how to work. Middle kids do work routinely. We need to give poor kids the same opportunity." That won loud approval from the crowd. And he addressed Romney directly over the career politician attack: "Let’s  be candid. The only reason you didn’t become a career politician is because you lost to Teddy Kennedy in 1994."

Gingrich's poise was in sharp contrast to the botched attacks, missed opportunities, and general awkwardness that marred Cain's and Perry's performances earlier this fall and helped end their surges. And his response to Romney's early attacks was the rule for the night. For every criticism from an opponent Gingrich was ready with a snappy, confident explanation. His answers amounted to gobbledygook at times -- like his insistence that conservatives of the early '90s had only proposed an individual mandate in an effort to stop Hillary Clinton's healthcare reform plan -- but Gingrich is unusually effective at selling gobbledygook. There was plenty in his performance Saturday night to reassure the hordes of new supporters who've flocked to his campaign in recent weeks.

The other reason he was the big winner is that Romney screwed up and said something he shouldn't have. It came when Perry, exhibiting a previously unseen prosecutorial flair, got under his skin by claiming that a line touting his Massachusetts healthcare law as a national model had been deleted from a new edition of Romney's book. "Rick, I tell you what," Romney replied. "Ten thousand bucks? Ten-thousand dollar bet?”

When you're the richest candidate in the race and you made your fortune in venture capital and Democrats are already eagerly portraying you as the embodiment of the top one percent and you recently had trouble finding a non-$100 bill in your wallet, it's probably not a good idea to casually offer a five-digit wager on national television. The ridicule from the press and pundits began immediately. Romney's $10,000 bet may prove to be what most people remember from this debate. Which is bad for him, obviously, and good for his main competitor, who just so happens to be Newt Gingrich.