The science of warp

From time travel to interstellar communication, an expert explains what sci-fi gets right and wrong 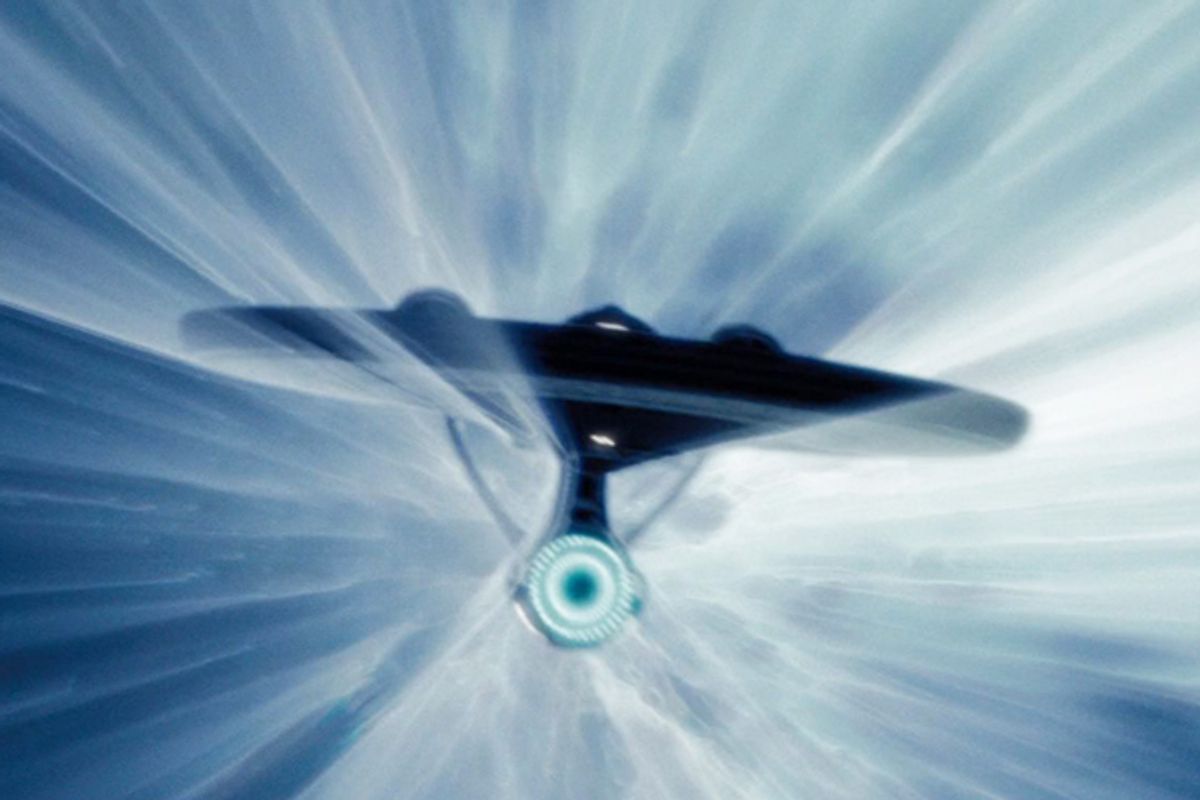 “Back to the Future,” “A Christmas Carol,” the “Terminator” series, “Star Trek,” “Rip Van Winkle,” “Hot Tub Time Machine,” "Terra Nova" — the list goes on. We, as a culture, have been mesmerized by the idea of traveling in time: going back to fix life-changing mistakes we regret; going forward to get a sneak preview at what we’ll become. Equally transfixing is the notion of traveling through space, exploring galaxies and unknown universes far beyond our sight’s reach.

In their new book, “Time Travel and Warp Drives,” Tufts physics professor Allen Everett and University of Central Connecticut math professor Thomas Roman explain the science behind the fiction of time travel, and tackle the question: Is it even possible? The authors delve into the lore of sci-fi shows and books to explain how wormholes, warp drives, and parallel universes work; and what Einstein’s theory of relativity is and its relevance to time travel. They also parse through all those pesky paradoxes that arise when one tries to go back in time.

Everett spoke with Salon over the phone to discuss how we perceive time, traveling at the speed of light, and why we can’t go back in time to kill Hitler.

I’m going to jump the gun and ask: In your opinion, is time travel possible?

There are ways in which it might be possible, but there are problems with all of those. I think it’s conceivable that time travel is possible. If someone put a gun to my head and made me make a yes or no prediction, I would predict no — with what we know now.

Twenty years ago, I think the answer would have been that it just wasn’t possible. We have learned some things about general relativity in the last 30 or 40 years or so, which make us take, at least for some of us in the profession, the idea of it being possible more seriously. But, still, one would have to say that the odds are against it. You might run into problems with time travel that you don’t run into with superluminal [faster than the speed of light] travel.

The correct statement is that backward time travel is not yet possible and may never be. We can travel forward in time.

If you get into a space machine and travel from Earth to a nearby star and return, at a high speed (near the speed of light), when you get back to Earth, you will find that perhaps the trip took one year for you, as measured by your clock on the spaceship, but when you return to Earth, you will find that you returned to an Earth which is 10 years into the future, from the time when you left. So that’s exactly what we mean by traveling into the future. The possibility of doing that is well-established physics. As a practical matter it’s hard to do with people because the effect only becomes noticeable when the speed approaches the speed of light and it takes a prohibitive amount of energy to accelerate a people-carrying rocket ship to the speed of light and then slow it down again.

You can accelerate elementary particles (which decay radioactively to speeds very close to the speed of light). There are abundant observations to the fact that particles live longer when they are traveling at speeds close to the speed of light than they do when they are at rest. That is part of everyday observations in elementary particle laboratories. So you can certainly travel, in principle at least, into the future and return, but you can’t go back and listen to Mozart play a piano concerto. The chance of doing that is iffy at best.

You write that "it would be a bit tough to organize any kind of galactic federation" because of a phenomenon called "time dilation." Can you explain what that is?

Suppose there’s a nearby galaxy which belongs to the emperor’s galactic empire. The emperor says, “I’m going to change the law in the empire. Henceforth, everyone on getting up in the morning must devote five minutes to praising the emperor.” So he sends one of his deputies off to a nearby star system with instructions to institute his new law, and in order to get there in a reasonable length of time, he’d have to be traveling at nearly the speed of light. He will get to the planet [in the nearby star system] in, let’s say, 100 years in the future, as far as the people on the planet are concerned. So they will say the law went into affect in the year [2111], but the Emperor’s deputy will take, say, only 10 years to travel to the planet, and another 10 years to travel back to Earth because of the time dilation effect. The law will be different at every point in the galactic empire because different observers will think the law went into effect at different times. I think that would make it difficult to run a reasonable empire.

Good point. So the person in the spaceship is experiencing time at a different rate?

Essentially, clocks in the spaceship are running more slowly than clocks that are at rest [outside the spaceship].

Does this have to do with our subjective experience of time?

OK, if there are two different times, inside and outside time machine, then doesn't time travel occur around us all the time? You mention in the book the idea of a bullet being fired. Theoretically, is the time inside the bullet slower than our time outside the bullet?

[Going back to our previous example with the emperor], people on Earth and on the [other] planet think their clocks are running at the same rate, but then the clock on spaceship, when it arrives at the other planet, will not be synchronized with the clock on [that] planet because the clock in the spaceship (just as the clock in the bullet) has been traveling at high speed and has undergone time dilation.

A commonly repeated concern when speaking of time travel (to the past especially) is the danger of changing history. Is it possible to change the past? Can you get around the paradox of your travel being assumed (i.e., you are meant to go back but would you still be able to if your history is altered)? Is that when we run into problems?

Yes. That’s when you get into logical problems. You may go back in time trying to assassinate Hitler, but on the other hand you know that Hitler wasn’t assassinated. You cannot change the past. That past has already happened. Nothing you can do about it. If you travel back in time, the only possibility is if, somehow, you’re forced to do so in some way that doesn’t alter the past. Or, there is the other possibility that when you travel backward in time you wind up in a parallel universe. So in the universe we live in where Hitler wasn’t assassinated, we could, conceivably, travel backward in time into a different universe where you would assassinate Hitler and the subsequent time evolution in that second universe would then be quite different.

Can you explain what space-time is? We know time as the fourth dimension, but can we visualize it, spatially, like the three others?

In many ways, time is similar to the three dimensions of space but in other ways it is quite different. They are connected with one another, [but] there are important differences between them. A quantity in physics is defined by how you measure it. You measure the spatial difference between two points with a meter stick; you measure the temporal distance between them with a clock. That means, to a physicist, that they are fundamentally different quantities because the experiments that you did do to measure them are different.

Are there some fundamental truths or laws that must hold for time travel to be possible?

Among the most important laws of physics are the conservation laws, with things like energy and momentum, which must remain constant in time. As far as we know there is no way of producing or getting rid of the total amount of energy in the universe.

In Madeleine L'Engle's “A Wrinkle in Time,” the characters travel by a method they call "tesseracting," which involves folding space. Is time folding theoretically possible, in the way, say, we’re able to fold two- or three-dimensional objects?

You talk about chaos or disorder in relation to backward time travel. Can you explain their relationship?

Why is backward time direction different than forward time direction? To me, the answer to that is something called the second law of thermodynamics, which says that the total entropy of the universe increases as time increases. Entropy is, essentially, the amount of confusion -- mixing -- in the universe. So, it’s that law which says it’s perfectly possible to see a diver dive off a diving board into a swimming pool. The laws of physics say that, if you arrange the system just right, in fact you can find that the diver will pop, spontaneously, out of the water and land on the diving board. It is possible, but the probability of the system having just the right conditions for that to happen is so small that we will never see it in the whole history of the universe. So when we talk about the difference between going forward and backward in time, what is it that defines that difference? Physicists say: What is it that produces an arrow of time? The answer is the second law of thermodynamics.

So this law explains cause and effect and why you can’t have an effect before its cause?

Is it theoretically possible to get stuck in a time loop, like Bill Murray in “Groundhog Day”?

The answer is yes, but you have to assume the “many worlds” interpretation of quantum mechanics is the correct one, and then you’re not exactly stuck in a time loop — every time you go around the loop, you come back to the same starting point in a parallel universe.

So, even if time travel is not possible for humans (for now), what do you think of its future prospects? And what kind of social impact does this kind of research bear on daily life?

Well, it’s hard to say because you don’t know what the results of the research are going to be. Physicists have learned quite a bit about the consequences of relativity as the result of this kind of research, so we know a lot more than we did, say, maybe 30 years ago. A person on the street might say, “So what?”—and that’s not an unreasonable attitude to have. Will there be actual consequences on people’s lives? It’s hard to answer that question. I would hope that the evolution of human society is going to be a lot different if it turns out that in some way or other, one can travel faster than light, in which case we would probably expand into the galaxy. From the point of view of humanity, I think the question of whether superluminal travel is possible will have a lot more consequence than the question of whether time travel is possible.