The president dismissed the Clinton-Gingrich battle as a baby-boomer "psychodrama." He might have to fight it out 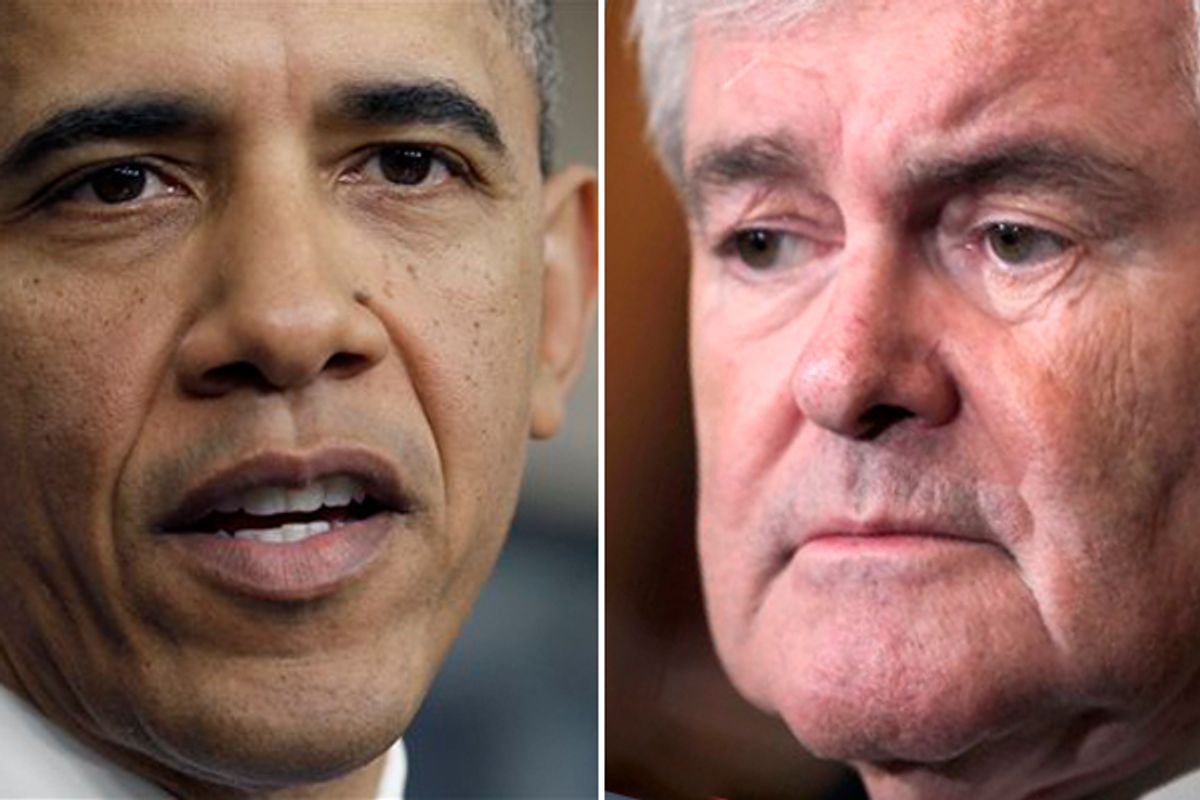 One of the most unsettling moments of 2008 campaign came when Barack Obama told an interviewer, "I come from a new generation of Americans; I don't want to fight the battles of the '60s." What an oddly cavalier thing to say. Obama's presidential campaign, in fact, most of his career, would not have been possible without the battles of the '60s. I wasn't sure what was worse, that he believed what he said, that he thought we'd reached some kind of post-racial, post-ideological promised land, that we'd won the battles of the '60s?  Or that he didn't, but he thought it was a politically winning message, putting all that muss and fuss behind us. I have to think it's the latter. He's a smart man.

Obama's comments about the '60s shouldn't have been surprising. He'd already gone on in the same vein in his second book, "The Audacity of Hope." There he confided that “in the back and forth between [Bill] Clinton and [Newt] Gingrich, and in the elections of 2000 and 2004, I sometimes felt as if I were watching the psychodrama of the baby boom generation — a tale rooted in old grudges and revenge plots hatched on a handful of college campuses long ago — played out on the national stage.”

The vicious GOP crusade against Clinton had been like an old college feud? Gingrich had proposed putting the children of welfare recipients in orphanages, and blamed Democrats for Susan Smith drowning her little boys. He personally wrote the GOP playbook for demonizing Democrats, advising other Republicans to call them "sick," "corrupt," "destructive," "traitors" and about 50 other words for depravity. And Obama likened his differences with Clinton to the rumbling of rival frat boys?   Obama did nod to "the victories that the 60s brought about" in the book, but he also blamed the Clinton-Gingrich gridlock on a case of "arrested development" among Americans raised in postwar affluence. So maybe there's some kind of karma in the unlikely but growing possibility that the president himself will have to face Gingrich head to head in 2012. It's becoming clear we're still fighting "the battles of the '60s."

I'm a great admirer of historian Michael Kazin, but he's got something very wrong in his New Republic piece welcoming a Gingrich-Obama showdown, because the match-up "could bring a healthy candor to our politics." The words "Gingrich" and "candor" should never be used in the same sentence. Gingrich will say whatever he needs to in order to get elected, whether in 1994 or 2012.

If Gingrich is nominated, it won't be because of his ideological clarity – he's Flip to Mitt Romney's Flop. It will be because he's seen as the most likely to bully and humiliate Barack Obama. And that's what GOP politics has come down to today.

It's funny that Obama and Bill Clinton don't entirely get along; they have a lot in common. Obama updated the Clintonian compromise playbook, and thought he could work it better because he's smoother. He's not angry like Bill Clinton, he doesn't undermine himself, and also, the Villagers, the Beltway poohbahs who hated Clinton, loved the young senator from Illinois. Or at least they used to. It's ironic: Obama knew how to defeat the Clintons, to beat them at their own games -- kind of like a college grudge match or prank contest – but he's now got to figure out how to beat increasingly vicious Republicans in 2012. Let's hope he and Bill Clinton confront the limits of their compromising approach, and put their heads together to get the country out of this mess.

It's hard not to wonder whether Democrats' conciliation strategies have helped embolden the right. Right now, we've got two GOP front-runners, Flip and Flop, I mean Mitt and Newt, turning their backs on policies they used to support -- an individual mandate for health insurance, free-market cap and trade measures to limit carbon emissions, the Earned Income Tax Credit – as they raced to the right. Are they following the GOP base to the right, or helping to lead it there?

It's hard to know. Republicans have lied to the economically struggling portion of their base for a long time, insisting that their policies will make the economy better, and things just keep getting worse. So they've had to promise ever more extreme measures, not just to limit government but to do away with it almost entirely. Meanwhile, the plutocrats who support them have gotten everything they want, from Republicans and increasingly from Democrats. Why shouldn't they keep asking for more?

At the same time, Democrats have embraced those formerly Republican, market-based policies that Gingrich and Romney once supported, like rewarding work or carbon reduction or purchasing health insurance all through the tax code. So it seems like Republicans have no other strategy to fight them right now besides insisting they're awful people. Clinton was impeached over his personal life; Obama, who seems to have an admirable marriage and family life, is a centrist they're savaging as a probably Muslim Kenyan socialist. Where will this end?

I think it would help if Democrats stood up to GOP bullies with a concrete populist pitch that clearly put them on the side of the 99 percent. President Obama is getting there (despite endorsing a deplorable Plan B decision this week.)  Still, I was glad to hear his Osawatamie, Kan., speech. There is no doubt that Obama is listening to Occupy Wall Street, as he detailed the scandal of crushing income inequality and the growing wealth of the top 1 percent:

After all that’s happened, after the worst economic crisis since the Great Depression, they want to return to the same practices that got us into this mess. In fact, they want to go back to the same policies that have stacked the deck against middle-class Americans for too many years. Their philosophy is simple: we are better off when everyone is left to fend for themselves and play by their own rules.

Well, I’m here to say they are wrong. I’m here to reaffirm my deep conviction that we are greater together than we are on our own. I believe that this country succeeds when everyone gets a fair shot, when everyone does their fair share, and when everyone plays by the same rules.

As I'm finishing my book (finally) I had reason to go back and listen to the rant that helped launch the Tea Party: CNBC's Rick Santelli's vicious February 2009 attack on the president's plans to help homeowners facing foreclosure (help that barely materialized). Republicans like to depict the Tea Party as populist, but Santelli's rant was anything but: He railed against efforts to bail out the economy's "losers" on the floor of the Chicago Mercantile Exchange, while traders cheered him in the background.   Addressing the president directly, Santelli asked:

Why don’t you put up a website to have people vote on the Internet as a referendum to see if we really want to subsidize the losers’ mortgages, or would we like to… reward people that could carry the water instead of drink the water? This is America! How many of you people want to pay for your neighbor’s mortgage that has an extra bathroom and can’t pay their bills? Raise their hand. President Obama, are you listening?

Santelli then called on "all you capitalists" to join him at a "Chicago Tea Party."  The rest is history. Santelli's division between "people that could carry the water instead of drink the water" is just a different version of the GOP's 50-year strategy of divide and conquer, us vs. them. But more voters are figuring out "them" is "us" – so many people are now the "losers" Santelli and his GOP friends rail against.

So Gingrich calls Obama "the food stamp president," and now to top Gingrich, Mitt Romney is trashing the disgraced former House speaker with one of his few brave decisions: to briefly come out against Paul Ryan's destruction of Medicare. According to Republicans, the 46 million Americans now on food stamps are "them"; poor people who allegedly lack a work ethic (in a land of the working poor) are "them"; public workers are "them"; now the elderly are "them." Maybe the GOP is going too far this time. I'm glad the president is fighting, but I think this will get uglier still before November 2012.

I was honored to discuss the Mitt-Newt battle on MSNBC's "The Ed Show" with Gov. Howard Dean and North Dakota Sen. Byron Dorgan, an old-style populist Democrat who was one of the few to oppose the repeal of Glass-Steagall banking restrictions in 1999. Dorgan talked personally about the impact of Gingrich's deplorable campaign to brand Democrats as "sick traitors." I was also proud I bit my tongue when Dorgan noted that someone once said of Gingrich, "his baggage has baggage." Watch: