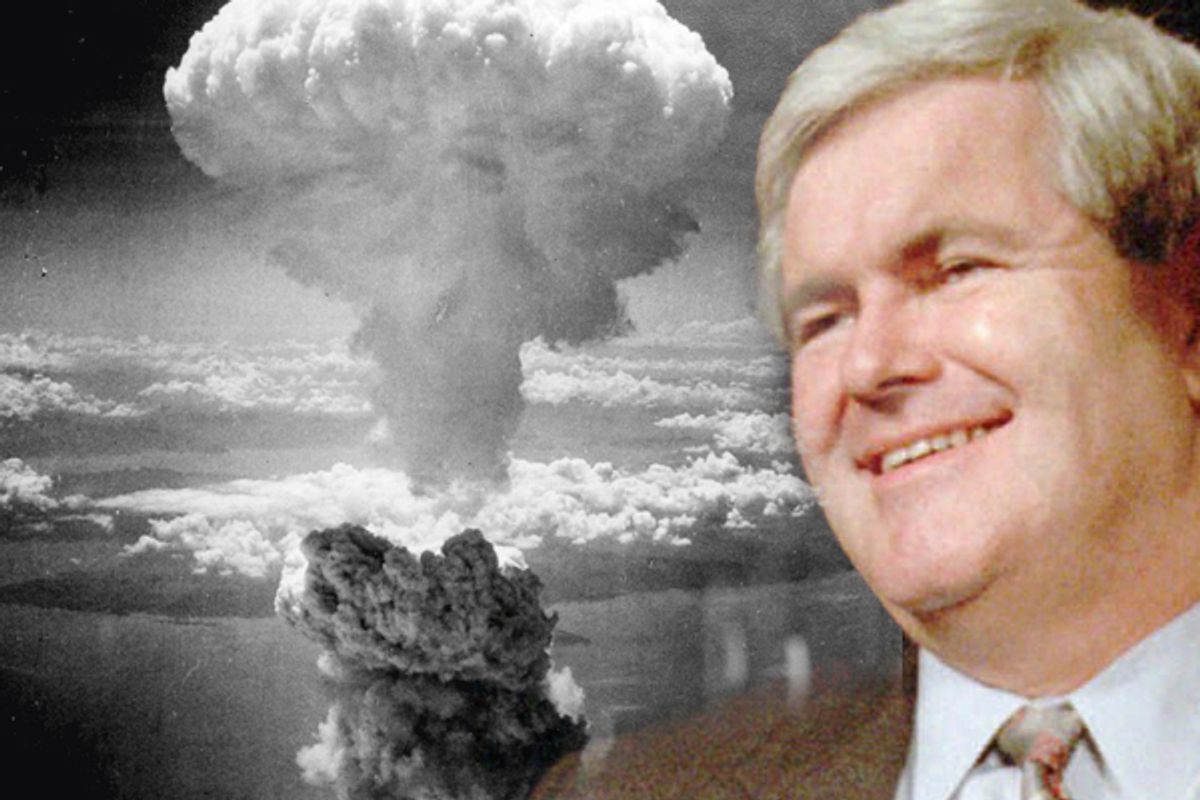 Newt Gingrich has changed a lot of positions over his many years in public life, but there are a few things about his worldview that are consistent. One is an obsession with apocalyptic or civilization-ending threats, often paired with the idea that Gingrich himself is alone (or nearly so) in recognizing the scale of the danger and in being equipped to deal with it.

My favorite example of this genre of Gingrich studies is a 1994 interview in which he declared "People like me are what stand between us and Auschwitz."

That line became an instant classic for Newt aficionados; less well-known is that Gingrich elaborated on the theme -- at length -- in the same interview, conducted by the Atlanta Journal Constitution:

"I see evil around me every day," he says. He cites the widespread slaughter from Bosnia to Washington D.C. The German tourist killed by what Gingrich calls "a savage" from the urban jungle of Miami.

"We are at the edge of losing this civilization," he says. "You get two more generations of what we had for the last 20 years and we're in desperate trouble ...

And then Gingrich swung back to his own central role in the world-historical drama. "As long as I believe that's true," he said, "I'll keep trying to recruit another generation and train another generation so that when I'm too tired to keep doing this, they'll be ready to step in."

He added: "I don't want my country to collapse. I don't want my daughter and wife raped and killed. I don't want to see my neighborhood destroyed. … I see Auschwitz and I see my children, my mother, my wife. These are real people; these are not abstractions."

Viewers of the Republican foreign policy debate on Saturday caught a glimpse of this same worldview when Gingrich mentioned offhand that America might not survive an onslaught by Iran.

"Rick Santorum's consistency and courage on Iran has been a hallmark of why, if we do survive, it will be in part because of people like Rick who've had the courage to tell the truth about the Iranians for a long time," he said.

Even the most committed anti-Iran polemicists have not proposed that the country could destroy the entire United States (and on this point, this map is instructive).

And then there's Gingrich's well-documented obsession with the purported threat of an electro-magnetic pulse (EMP) attack, in which a nuclear weapon is detonated at high altitude, releasing a burst of energy that could disable anything that runs on electricity.

"Millions would die in the first week alone," Gingrich has written about the threat of an EMP.

At an American Israeli Public Affairs Committee conference in 2009, Gingrich raised both the specter of an EMP attack and the catastrophic threat of nuclear weapons being detonated on the ground in American cities:

I strongly recommend Alex Berenson, a New York Times reporter, who recently wrote a novel called The Silent Man, which is about an effort set off a Hiroshima-sized weapon in the Washington DC area at the time of a State of the Union. And recognize that a a Hiroshima-sized weapon has a radius of one mile. There are over a hundred thousand people in that zone. The idea that you could stop them driving it in in a truck is a fantasy. This is an enormous threat to our very survival.

(He may be right on that last count.)

Gingrich also sees the supposed rise of Shariah in America as a threat to "Western civilization."

"Stealth jihadis use political, cultural, societal, religious, intellectual tools; violent jihadis use violence," he said in a speech at the American Enterprise Institute last year. "But in fact they're both engaged in jihad and they're both seeking to impose the same end state which is to replace Western civilization with a radical imposition of Sharia."

Added Gingrich: "If you want to know what appeasement is like in America, if you want to know why this is a problem here at home, this is the kind of stuff that's going on because nobody in our secular elites is prepared to stand up and defend Western civilization against the routine steady erosion."

It was this same mind-set that made the issue of climate change so irresistibly interesting for Gingrich -- an interest he is now apologizing for. He was enthused by the epic scale of the problem, variously calling it a "major threat to political stability, international security, and economic prosperity" and "devastatingly threatening to most American pocketbooks and jobs."

What would a mind like this do in the Oval Office?