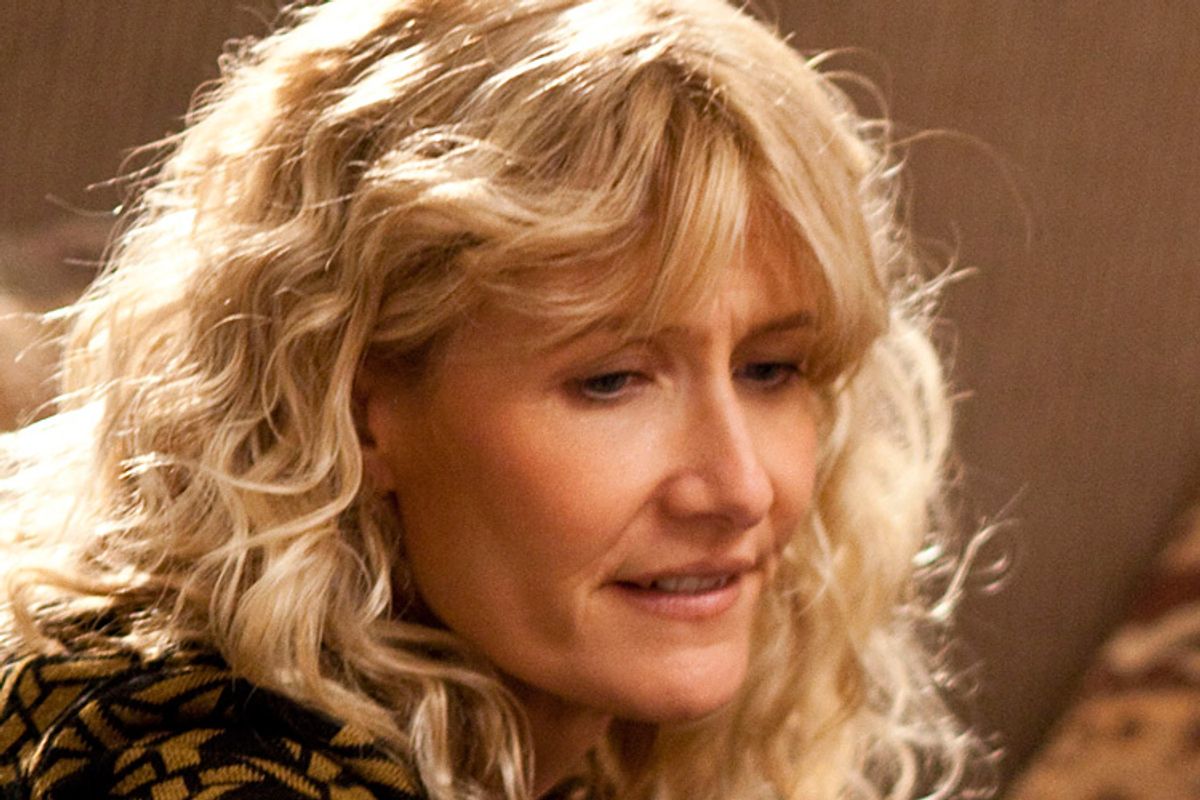 "Everything can be transformed," said Laura Dern's character, Amy Jellicoe, on last night's first-season finale of "Enlightened," walking to work and then through the corridors of her office. "Every single thing. Goodness exists. It's all around. It's just sleeping. It can be wakened."

HBO, which is reputedly on the fence about renewing this critically acclaimed but low-rated series, should recognize the goodness on its schedule Monday night and give "Enlightened" another season. It's charming, intelligent, uncomfortable, often moving. Executive produced by Dern and writer-producer Mike White, and written by White, "Enlightened" is doing things that no series has ever done, in a tone that no show has ever attempted. And on top of that, it feels like a definitive statement on a troubled era.

If you saw the finale of "Enlightened" last night -- only half-jokingly titled "Burn it Down" -- you know that Amy made good on her promises to confront her employer, the giant drug company Abaddon, about the callousness and illegality that she uncovered through research. You also know that Amy, who survived a breakdown so severe that it sent her into rehab, is especially outraged about her own department, which is developing software that figures out how to work employees as hard as possible while paying them as a little as possible. "Enlightened" is not an explicitly political series -- not in the way that "South Park" is, or that "The West Wing" was -- and yet the corporate intrigue aspects strike to the heart of the moral crisis that's convulsing this nation. The image of Amy fantasizing about pouring gasoline on the floors of Abaddon's headquarters and setting it ablaze was chilling -- and as metaphor, perfect. Do we continue to accept business as usual out of a weary belief that change is just too hard? Or do we say something, and do something, even if means enduring humiliation and abuse? Do we continue to live in this rotting house, or do we burn it down?

"I will not be afraid," Amy said, walking into her office to demand a meeting with department heads and address the problems, her light blue blouse and yellow skirt standing out in a sea of corporate greys and blacks. "I will be bolder."

It also helps to be "crazy," one of the epithets that some of Amy's co-workers use when they talk about her. Some people, of course, really are mentally ill, or at least so emotionally disturbed that nothing they say is of much use to anybody. But such epithets can also be used to stigmatize people who act and think in ways that call out the powers that be on their arrogance and complacency. The easiest way to neutralize a bringer of bad news is to stigmatize the messenger, either by calling her crazy (which is more or less what the board did after Amy left the room, revealing that they only let her speak to them as a joke) or by settling on some other pejorative phrase, such as "lazy bums" or "dirty smelly hippies" or any of the other retro smears trotted out in arguments about Occupy Wall Street.

One of the many wonderful things about "Enlightened" is that you can't take anything that that pops out of its characters' mouths at face value -- especially not Amy's remarks and requests, which are often self-serving. We're quite aware that Amy is a terrible employee and is acting at least partly out of personal grievance. She wants to get back some of the power she lost when she went into rehab and lost her executive position, and she's hurt by overhearing the board calling her crazy. But it's also true -- in life and in this series -- that righteous action needn't come from a disinterested place to be worth pursuing. Politics is personal.

“We can blow this place wide open!” Amy excitedly tells her co-worker, Tyler (Mike White), urging him to help her hack into the email system and retrieve correspondence proving that the company's executives are hopelessly corrupt. "Why would we want to do that?" Tyler asks.

It's also worth noting the difference between real-world Amy and the Amy we see and hear in the show's contemplative, voice-over segments. Many of the lines that I quoted in this piece occur in what you might call a "protected space" -- inside Amy's roaming mind. The character that we see in these sequences is a best-case-scenario version of Amy. I think her statements express the show's true outlook on life, its sense of what is possible, without sarcasm, irony or winking. It's a benevolent and even inspirational view. It's very easy to sneer and snicker at. It's valuable. And right now it's almost nonexistent on TV.

"Enlightened" might be a great series even without the parts about Amy's workplace crusade. White, Dern and their collaborators have a keen ear for the way that people deceive each other and themselves. As TVLine's Michael Slezak, another renewal booster, wrote, Amy is "the most tantalizingly/unapologetically unlikable lead character in recent memory" -- and considering how many comically unlikable characters there are on television, that's a bold statement. At the same time, though, "Enlightened" has compassion for foibles and empathy for pain. Last week's episode -- essentially a solo turn by Diane Ladd, who plays Dern's elderly, widowed mom on the show, and is Dern's mom in real life -- might have been the most moving half-hour of TV I've seen this year, as good as the best of "Louie." The scene between Ladd's character and Amy's druggie ex-husband Levi (Luke Wilson) in the kitchen had the sting of observed truth, each character reopening old wounds and saying and doing things that real human beings would actually say and do. As I said in an earlier piece about the show, the series is as merciless as can be without being mean. It sees through everyone's b.s., including Amy's.

But it's the connection between Amy's personal psychodrama and her workplace that puts the series over the top, and turns it into something more than a quirky half-hour show about a troubled woman living with her mother. It's a reminder of how work defines us, and in some cases deforms us, along with everyone we know -- and the soul-crushing opposition that rises up whenever we try to change anything about it.

We need a show like this right now, and not just because it's a great comedy and a great character study. Beneath its comic brilliance and formal daring, it believes in a better future, a better country, a better human race. And if you rolled your eyes at that last line, you should work for Abaddon.