Sure, he's winning now. But the new cult hero is still a mediocre quarterback -- and a thoroughly obnoxious person 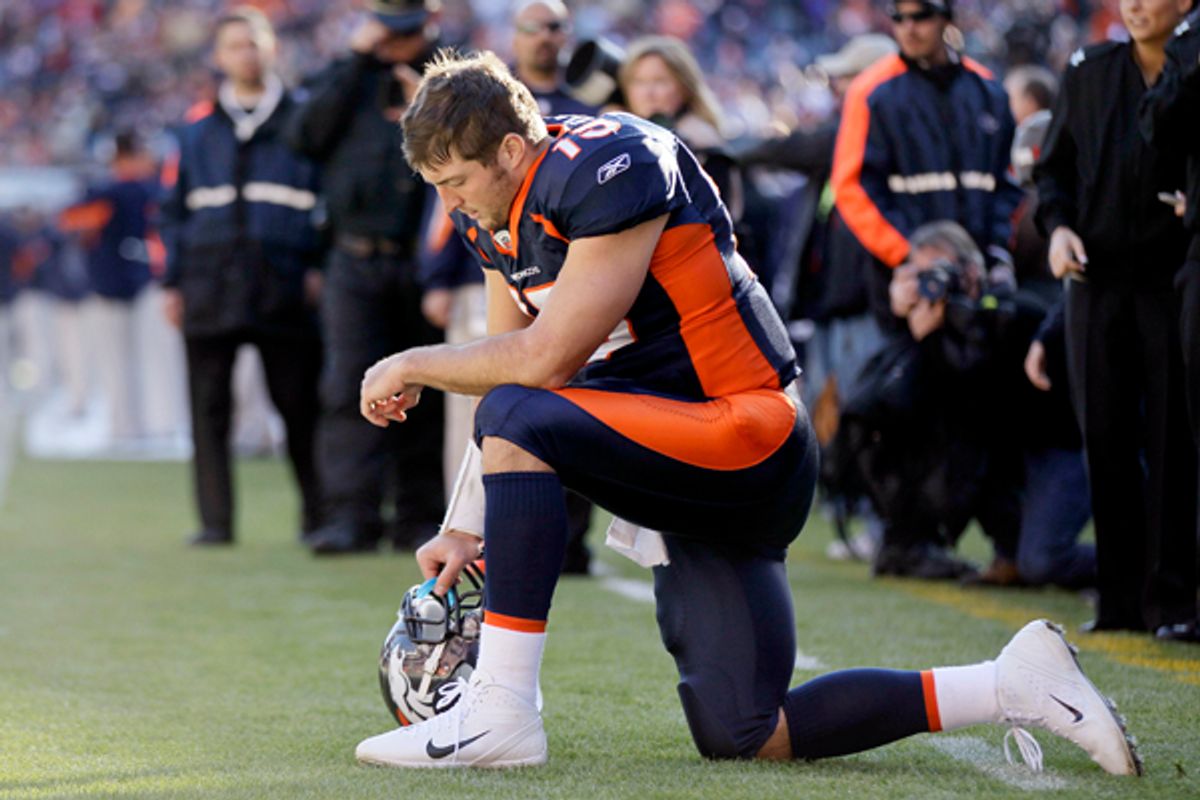 Denver Broncos quarterback Tim Tebow (15) prays in the end zone before the start of an NFL football game against the Chicago Bears, Sunday, Dec. 11, 2011, in Denver. (AP/Julie Jacobson)
--

For a guy who has only started 11 games as a pro, Tim Tebow has already touched off more sour, unwinnable arguments to last a career. Is the Denver Broncos quarterback a pro-life religious zealot who needs to keep his fervor off the football field and out of the locker room? Is he destroying smashmouth football with his cutesy option play? It's a debate that consumes both sports radio and even the "Today" show -- and with Gingrich-esque momentum, the argument is going Tebow's way.

On Fox News, Tebow's 7-1 record this year is just the latest reason to attack a liberal straw man. "Tim Tebow's success as the quarterback of the Denver Broncos has done little to silence his critics, who believe that his faith in Jesus Christ has no business on the football field," writes Todd Starnes. "It doesn't matter how many touchdown passes he throws or how many games he wins because Tebow will always be a lightning rod for anti-Christian bigots."

Well, always is a long time, and apologists like Starnes do Tebow no good when they imply that all his critics are anti-Christian bigots. Indeed, on Salon last week, Andrew Leonard made the liberal case for loving Tebow. "Maybe this country would be better off if everyone, left or right, evangelical or atheist, pocket passer or option quarterback, occasionally found room in their hearts to cheer for those who are different," he wrote.

But why do we need to change our opinions about Tebow at all, either as a person or a football player?

Tebow, after all, wouldn't be a lightning rod for anything if he were not a football player. So how good is he? First, let's dispose of the myth currently being taken as gospel by much of the sports press and nearly all Denver Broncos fans: that Tebow as a professional quarterback is simply a winner.  He was in college. In the interest of full disclosure, I wrote in the Wall Street Journal in 2008 that "Tim Tebow is on track to become the greatest quarterback in college football history." That was before I saw Cam Newton play. Still, Tebow was, if he'll pardon the expression, damned good.

But as a pro, to cite chapter and verse, Tebow has been lousy, or not far north of mediocre at best. Going into this Sunday's game with the New England Patriots, Tebow has thrown 280 passes, completing just under 49 percent. This season he is the 14th-ranked passer in the 32-team league, and though he has thrown 11 passes for touchdowns with just two interceptions, in the most important single passing stat, yards per throw, he ranks 27th.

Broncos fans, I hear you -- the most important stat is winning, not yards per throw. But in only one game during the Broncos' much publicized six-game winning streak have they scored more than 25 points, and in four of them they've scored 17 or less. The Denver defense, on the other hand, has been outstanding. Since their Nov. 6 victory over Oakland, they have given up an average of only 17 points per game, allowing 13 or less in four games. If Denver fans want to shout "Hallelujah," they should start with the Broncos' defensive unit.

The 13-10 victory over the Bears this past Sunday was more typical of the 2011 Denver Broncos than not. Tebow and the offensive unit failed to produce any kind of score during their first 11 possessions and survived only because Chicago played with astounding ineptitude. The only reason the Broncos got a chance to win was because Bears running back Marion Barber ran out of bounds near midfield with less than two minutes on the clock. This gave Denver time, when they got the ball on the ensuing punt, to move into field goal range (which, in Denver's altitude-thinned air, is just any time you cross the 50-yard line). A smiling Tebow told reporters after the game, "I might have thanked the Lord when he [Barber] did that. [Otherwise] we might have only had about 10 seconds left on the game when we got the ball."

For his part, the Lord tweeted, "Don't thank me. I didn't tell that putz to run out of bounds." Presumably He also didn't tell Barber to fumble the ball away at the Denver 36 in overtime, thus setting up the Broncos' game-winning field goal.

I hated Tim Tebow before I knew anything about his religion. Specifically, I hated him from 2006 through 2009 when he was the quarterback for the Florida Gators. I hated him far less when Alabama finally stuffed Florida in the SEC championship game at the end of the 2009 season and he sat on the sidelines bawling like a baby. At first I laughed – "Ha, ha -- how do you like it now, Timmy? Why don't you go up in the stands and hold Mommy and Daddy's hands?" I even clipped a newspaper photo of him, tears streaming down his cheeks, and hung it on my office wall.

The pros, however, are like the Army – my team right or wrong. If you want your team to win, you root for the guys who wear your uniform, regardless of where they come from or where they went to school. But nothing Tebow does on the football field or off it is going to make me feel any different about abortion -- no matter how strongly he comes out against it. And if anything he does makes you feel different about abortion, then you're neither a believer nor a bigot, you're an idiot. And I wonder how much preaching Denver fans are going to stand for when the team loses three or four in a row.

I do admire him for his public stance on compensating college athletes for the money they generate for their schools, which reveals more guts than some of his coaches have shown. And I like that Tebow puts his money where his mouth is, helping his parents, who are missionaries, establish and maintain an orphanage in the Philippines.

But a role model? No way. Many of his values are not mine, and I wish he would understand that proclaiming them publicly could create divisions on his own team. As former Denver quarterback Jake Plummer told a reporter, "I wish he'd just shut up after a game and go hug his teammates." A much stronger reaction occurred just before Tebow's rookie season at an NFL scouting combine. Tebow suggested the group pray; a player suggested that he "shut the fuck up."

The suggestion that Tebow tone it down in public seems to anger people like Todd Starnes, who asks rhetorically, "Should Christians enter restaurants through the back door and use separate drinking fountains?"

No, but when they're in public they might follow the advice of Jesus in Matthew 6:5-7, who instructed that "when thou prayest, enter into thy closet, and when thou hast shut thy door, pray to thy Father which is in secret ..."

Personally, I want my quarterback to have more of a Joe Namath-type swagger and a little less humility. But in the NFL, God is on the side of the best quarterback.