Port of Oakland shut down 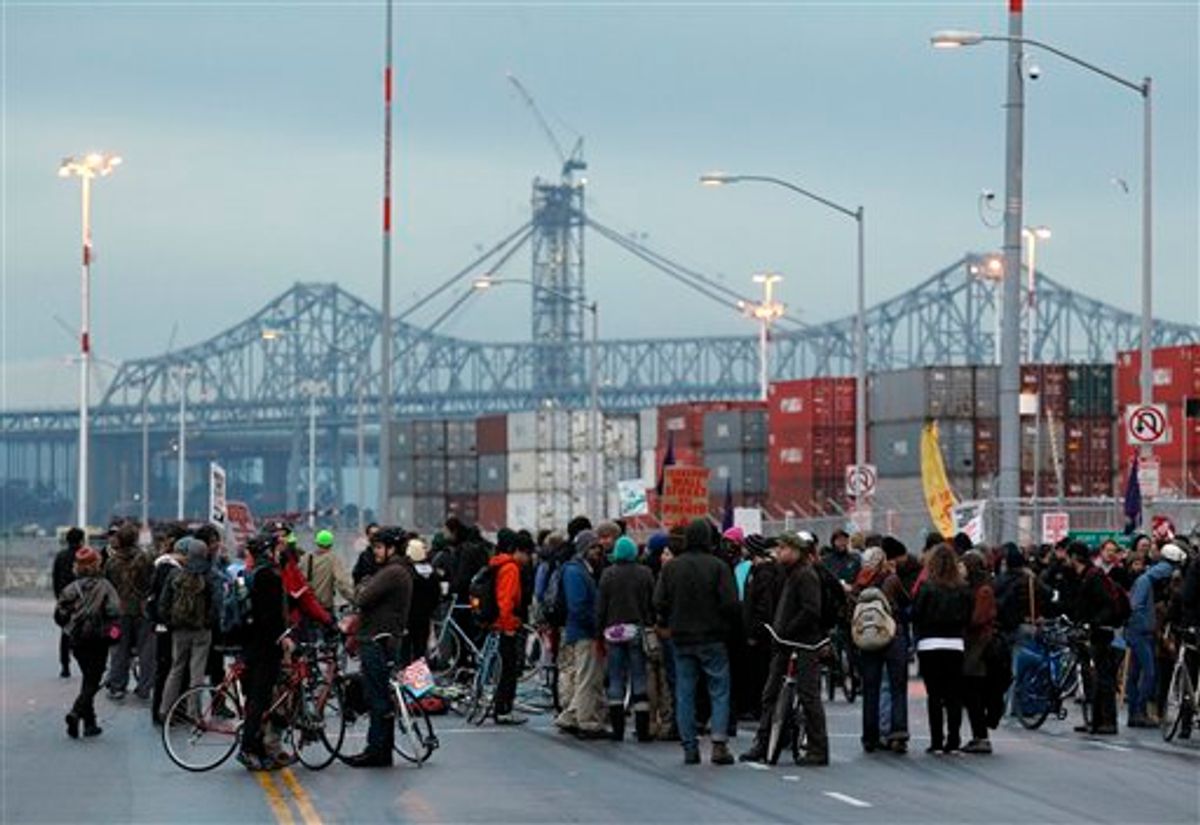 Protesters block one of the entrances to the Port of Oakland on Monday Dec. 12. (AP)
--

OAKLAND, Calif. -- Monday’s 5:30 a.m. march to shut down the Port of Oakland was cold, wet and dark, but adrenaline was high for the day of action coordinated over the past few weeks with hours of debate, outreach and planning. More than Occupy Wall Street camps — mostly between Anchorage and San Diego, but also in Denver, Houston, New York City and others -- demonstrated in solidarity with the Longview, Wash., longshoremen’s six-month battle with multinational grain transporter EGT and L.A. port truck workers who suffer low wages and union-busting practices.

The crowd was mostly, but not limited to, the young core organizers who have been involved since the beginning. There were also a mother strapped with a child, a clergyman, workers and teachers. While union leaders had voiced opposition to the action, there were plenty of union members in the crowd. At around 10 a.m., protesters got word that the port was officially closed after the arbiter had deemed it an unsafe workplace. Marchers left the port, many holing up for afternoon naps and meals. Those who still had energy, along with day workers who couldn’t make the “morning shift,” rallied at Occupy Oakland's original site, Frank Ogawa Plaza, to hear organizers, union leaders and veteran activist Angela Davis speak.

By the time of the afternoon rally, word had come of port actions in other cities. In Portland, Ore., demonstrators blocked two terminals. In Houston protesters trying to shutdown the port were met with an unprecedented arrest tactic: A big red inflatable tent was placed over protesters lying on the ground, before 20 were arrested. In Seattle protesters were hit with tear gas and flash-bang grenades. In Denver, 13 occupiers trying to shutdown a Walmart distribution center were arrested. In San Diego four people were arrested. Occupiers in San Diego and Portland both requested that Oakland continue the blockade in response to police action — a promise Oakland had made long before the evening’s general assembly voted on the proposal.

The second march to the port in the afternoon was, as expected, much bigger than the morning shutdown with the crowd numbering in the thousands.

Terry Fletcher, an elementary schoolteacher, said she isn’t sold on shutting down the ports, but she considers the need for working-class solidarity more important than the tactics. She thinks such a big action should have had more focused demands, but she came out anyway.

“I’m used to organizing with goals, but maybe they’re organizing in a different way and it could work," she said. "But it’s more important to be in solidarity.”

Mark Herbert, a company port trucker who was waiting to deliver shipments of meat from the Midwest, watched from his truck. When word got out that he was losing between $200 and $400 a day because of the port shutdown, reporters swarmed him.  Herbert is an independent contractor from Utah and not represented by a union. When pressed on his own working conditions, it became evident he had some sympathy for the protesters. “Some of the stuff I agree with. I’d like better benefits.” He laughed: “Maybe that’s why I have diabetes and high stress.” Herbert admitted that when he has work-related grievances, he basically just keeps them to himself and really has few options in the way of addressing those complaints.

The shutdown continued through early morning hours of Tuesday without police response. A port spokesperson told KCBS news that the “ripple effect” of the Oakland shutdown would cost $8.5 million. (For more on the economics of the port, see Andrew Leonard on "The Costs of a Port Shutdown.")

The Oakland police chief told the Bay Citizen that police would continue to monitor the protesters' activity and decide how to respond based on “the crowd’s demeanor and the resources we have available.”