Could Words With Friends really bring down a plane? The actor jokes, but cellphone interference can be serious 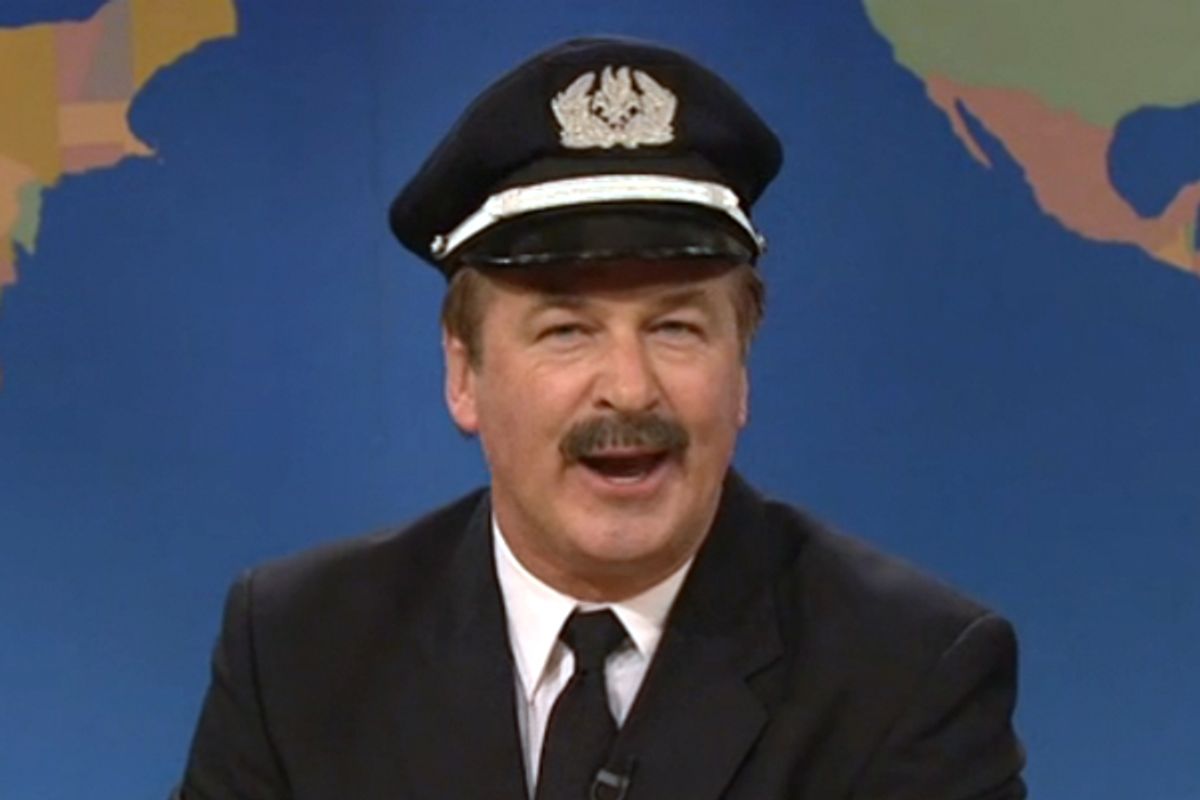 Alec Baldwin refused to shut off his cellphone and got kicked off an American Airlines flight last week, and while Baldwin is now playing the incident for laughs on "Saturday Night Live," it still raises serious questions.

The Baldwin brouhaha comes on the heels of a splashy New York Times story about the supposed harmlessness of electronic devices. The gist of public perception -- certainly the perception of Mr. Baldwin -- fueled and refueled by articles like this, is that the prohibition against personal electronic devices is a waste of time.

Well, it is and it isn't. It depends which gadgets you're talking about, and for what reasons.

Can a cellphone really interfere with a plane's systems and avionics? The answer is that it's highly unlikely, but possible. That's not the answer you want, I know, but like almost everything in commercial aviation, it depends. For example, although a plane's electronics are designed with interference in mind, if the shielding is old or faulty there's a greater potential for trouble.

Even if not actively engaged with a call, a cellphone's power-on mode dispatches bursts of potentially harmful energy. For this reason, they must be placed in the proverbial “off position” prior to taxiing, as requested during the never tedious pre-takeoff safety briefing. The policy is clearly stated, but obviously unenforced, and we assume the risks are minimal or else phones would be collected or inspected visually rather than relying on the honor system. I’d venture to guess at least half of all cellular phones, whether inadvertently or out of laziness, are left on during flight. That’s about a million phones a day in the United States alone. If indeed this was a recipe for disaster, I think we’d have more evidence by now.

That being stated, phones may have had a role in at least two serious incidents. The key word being "may," as interference is extraordinarily difficult to trace or prove. Some blame a phone for the unsolved crash of a Crossair regional plane in Switzerland in 2000, claiming that spurious transmissions confused the plane’s autopilot. In another case, a regional jet was forced to make an emergency landing after a fire alarm was triggered by a ringing phone in the luggage compartment.

Those are extremes. What would interference normally look like? You imagine a hapless passenger hitting the Send button when suddenly the airplane flips over or nose-dives into the ground, when in reality it's liable to be subtle and transient. The electronic architecture of a modern jetliner is vast, to say the least, and most irregularities aren’t exactly heart-stoppers – a warning flag that flickers for a moment and then goes away; a course line that briefly goes askew. Or something unseen. I’m occasionally asked if I have ever personally witnessed cellular interference in a cockpit.  Not to my knowledge -- but I can’t say for sure. Planes are large and complicated; minor, fleeting malfunctions of this or that component aren’t uncommon, and their causes are often impossible to determine.

It's possible that airlines are using the mere possibility of technical complications as a means of avoiding the social implications of allowing cellular conversations on planes. The minute it can be proven beyond a reasonable doubt that phones are safe, a percentage of fliers will demand the right to use them, pitting one angry group of travelers against another, with carriers stuck in the middle. If, indeed, airlines are playing this game, count me among those sympathetic, and who hope the prohibition stays in place -- not out of technical concerns, but for the sake of human decency and some bloody peace and quiet. The sensory bombardment inside airports is overwhelming enough.  The airplane cabin is a last refuge of relative silence (so long as there isn't a baby wailing). Let’s keep it that way.

As for the restrictions pertaining to computers, iPods and certain other devices during takeoffs and landings, this has nothing to do with electronic interference. In theory, a poorly shielded notebook computer can emit harmful energy, but the main reason laptops need to be put away is to prevent them from becoming high-speed projectiles in the event of an impact or sudden deceleration, and from hampering an evacuation. Your computer is a piece of luggage, and luggage needs to be stowed so it doesn’t kill somebody or get in the way. The same holds for iPads and Kindles. Sure, a book can weigh as much as a Kindle, but this is where the line is drawn.

In the case of iPods and the like, it's about the headphones and the ability to hear instructions from the crew. During takeoffs and landings, you need to be able to hear and follow instructions if there’s an emergency. That’s hard to do if you’ve got your MP3 player cranked to 11. Similar to the requirement to raise your window shades, it’s in the interest of situational awareness. Excessive?  Maybe, and after all flight attendants don’t go around waking people up or quizzing them on evacuation procedures. But what the heck, it's a slight safety enhancement that doesn’t cost anything.

The rules are confusing and confounding. It's also true that carriers have made a bad situation worse through random and sometimes contradictory enforcement of policy, and/or by enacting blanket bans on all devices, including those -- like noise-canceling headphones -- that are clearly not a threat.  Sure this makes the rules simpler and easier to enforce. It also encourages people to ignore or surreptitiously break them, and it nourishes people's suspicions that everything an airline tells you is a lie.

Which brings us back to Alec Baldwin. "One of the big changes," he wrote the other day in an apologetic blog entry on Huffington Post, "is in the increase of the post-9/11, paramilitary bearing of much of the air travel business. September 11th was a horrific day in the airline industry, yet in the wake of that event, I believe carriers and airports have used that as an excuse to make the air travel experience as inelegant as possible."

There is truth to that. All passengers deserve dignity, straight answers, courtesy and respect; I can't make excuses for crew members who fail to understand this, or who use the regulatory powers granted to them abusively.

On the other hand, believe me -- it takes some pretty bad behavior to get yourself thrown off a plane.  And while the rules aren't always understood, mostly they are there for good reason. You're expected and obliged to follow them.