"Glee" has a Judy Garland Christmas

In a clever, charming black-and-white interlude, the show reminds us what it's capable of 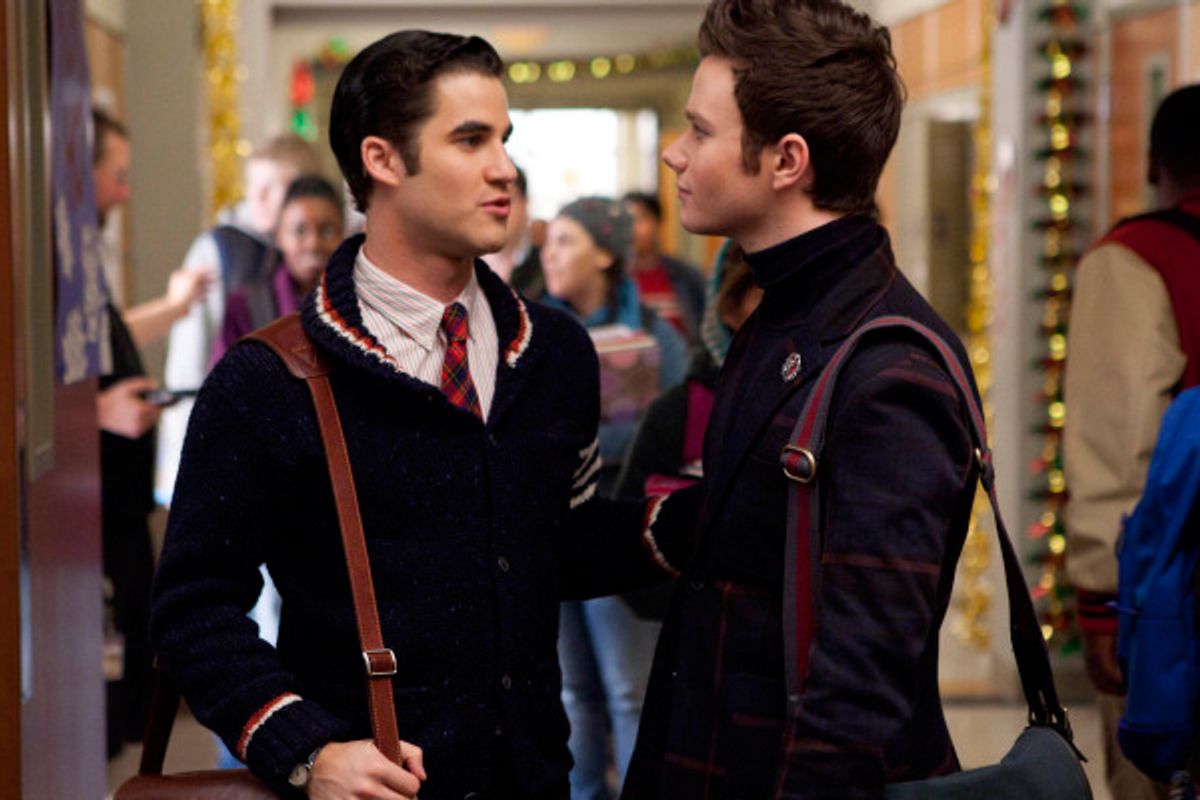 All together now, readers: If you hate "Glee" so much, Matt, why do you keep watching it? I don't know, folks. At the risk of sounding like a masochistic romantic who's stuck in a tortuous relationship -- Dear diary, I can't TAKE this anymore, it's horrible and it's KILLING me ... but OH MY GOD IF YOU COULD HAVE SEEN THE GIFT SHE BOUGHT ME! -- I have to go on the record about last night's "Glee" Christmas special. It was brilliant.

OK, actually, I should qualify that -- the middle section was brilliant. The wraparound stuff was the "Glee" usual: silly, pandering and dull. During the final number -- "Do They Know It's Christmas," set in a soup kitchen that no doubt was populated by the children of "Glee" cast and crew -- even the actors seemed bored, except for Jane Lynch, whose Coach Sylvester was acknowledging the first anniversary of her sister's death. (Tear cup.) But OH MY GOD IF YOU COULD HAVE SEEN THAT MIDDLE SECTION, DIARY! Presented in black-and-white, it perfectly re-created the set, the tone and even the camera moves of "The Judy Garland Show" Christmas special from 1963, but with a cultural flash forward/flashback quality, presenting a patchwork quilt vision of America that wouldn't have gotten past the network censors four decades ago.

Artie conceived the special to fill unexpectedly vacant airtime on the local PBS affiliate. Lovers Kurt and Blaine, devoted Friends of Judy, hosted an homage to the broadcast that they no doubt would have watched in awe had they been a couple (closeted, surely) in early-1960s Lima, Ohio. Early in the episode proper, there were ostentatious references to 1978's legendarily awful "Star Wars Holiday Special," but in the PBS special, that reference was reduced to Finn and Puck dropping by in Luke Skywalker and Han Solo costumes and performing a Springsteen-y version of "Santa Claus Is Coming to Town." The rest of the special was Judy, Judy, Judy. The filmmaking was vintage 1963, letting action play out in waist-up medium shots and head-to-toe long shots with a minimum of cutting. "Glee" even replicated the old-fashioned network TV special conceit of pretending that the unseen viewer was a party guest ("Well, hello! ... Come on in!"). I love that certain McKinley High performers were incredibly smooth on camera, while others glanced nervously at the lens. And the staging of Kurt and Blaine's "Let It Snow" was a delight.

Set, according to Artie, in the Swiss Alps village of Gstaad, there was a kind of alternate-universe feeling to the whole production, as if it were unfolding not on a public-TV soundstage in Lima but in a blandly benevolent dream space -- one in which the characters all got along fantastically well and never cut each other down in public or stole each other's boyfriends and girlfriends, and one in which it was possible to call Christmas "Christmas" rather than "the holidays" without seeming exclusionary. Herbie the Elf -- sorry, Rory the Irish exchange student -- even invoked "A Charlie Brown Christmas" by reciting from the New Testament, Linus-style. ("Lights, please.") During a season in which "Glee" feels even more slapped-together than it already did, this charming interlude was a reminder of what the show can do when it puts its mind to it.