First Dick Cheney, then Rudy Giuliani suggests Gingrich may be the toughest candidate in the GOP field 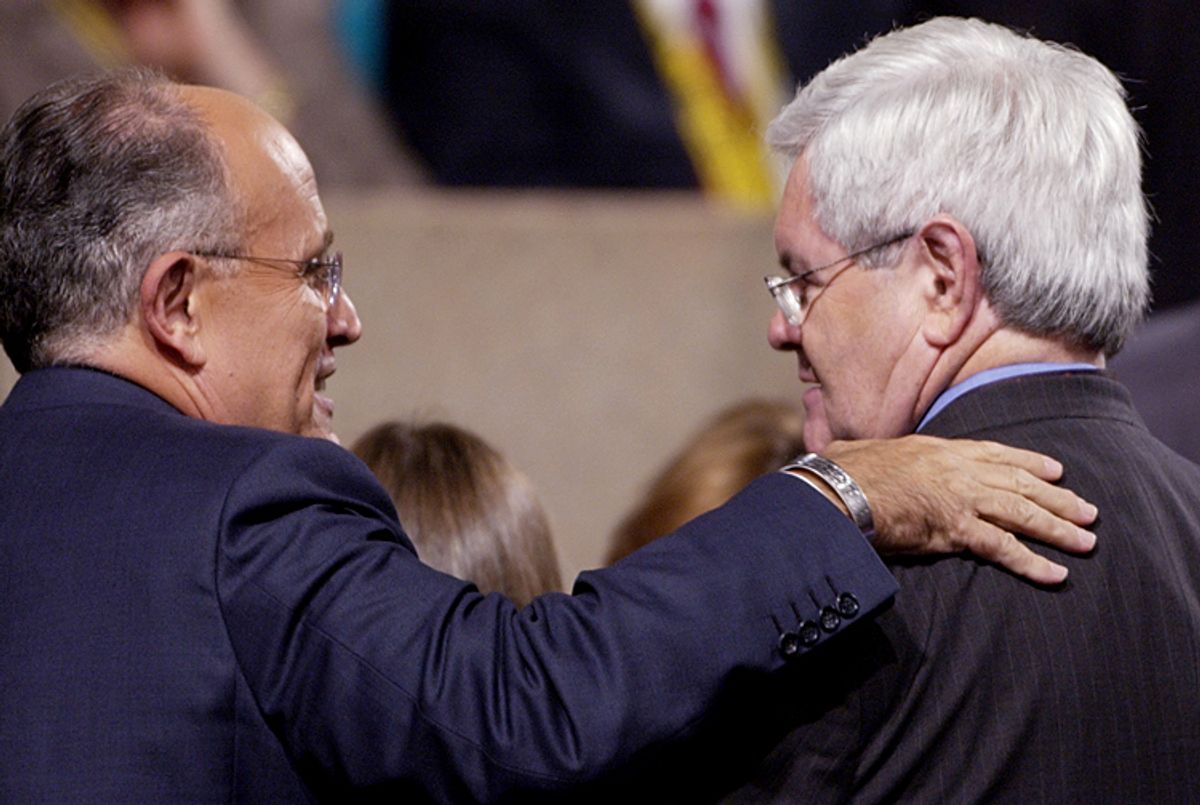 What does it mean that two of the nastiest men in the Republican Party are saying nice things about Newt Gingrich? On CNN Monday night Dick Cheney warned the GOP not to "underestimate" Gingrich, and lavished praise on the disgraced House speaker for his formidable political skills.

“My gut tells me right now as I look at it that Gingrich might actually be the stronger candidate, because I think he can make a broader connection than Mitt Romney to those Reagan Democrats,” Giuliani told Piers Morgan. "You won't have this barrier of possible elitism that I think Obama could exploit pretty effectively."

With a straight face, Giuliani explained why charges of "elitism" wouldn't fly against Gingrich. "One of the strengths he has is he's got a common touch, he's able to talk to people, he comes from a poor family, understands poverty from that point of view. He doesn't come from the American elite. It's going to be hard to paint him that way. There are a lot of other ways you can paint him, but you can't paint him that way."

You can't? The man with the half-million-dollar Tiffany credit line? The guy who wants to do away with "truly stupid" child labor laws? The one who thinks the poor lack a work ethic? The "historian" who earned just under $2 million from Fannie Mac and took in another $37 million for his healthcare think-tank? The candidate whose tax plan overwhelmingly favors the super-rich? How many ways is Giuliani wrong there? More ways than he and Gingrich have wives between them.

Can we also acknowledge there is no such thing as a "Reagan Democrat" anymore? There are white working-class people who now permanently vote against their own class interests, and they're Republicans, not Democrats. Then there are white working-class people who are understandably sometimes confused about which party represents them, because Democrats have spent so many years sucking up to Wall Street and playing down their populist past. Some of those voters -- the ones who are public workers, or union members, or close to retirement and listening to proposals to raise the eligibility age for Social Security and Medicare -- are starting to realize that they have become the GOP's latest scapegoat, the 21st century welfare queens, and they're taking another look at Democrats. Some white working-class voters stayed Democrats. But the Reagan Democrat analysis hasn't made sense for a long time.

Finally, I love the fact that Gingrich and Giuliani have six wives and two marriage annulments between them. Add in Donald Trump, who seems to be leaning toward Gingrich too, they can start a Three Wives Club. Way to go, family values party!

I'll be talking about the latest on the GOP field with Ed Schultz and Ezra Klein on MSNBC's "The Ed Show" at 8 ET.