When Republicans don't care about electability 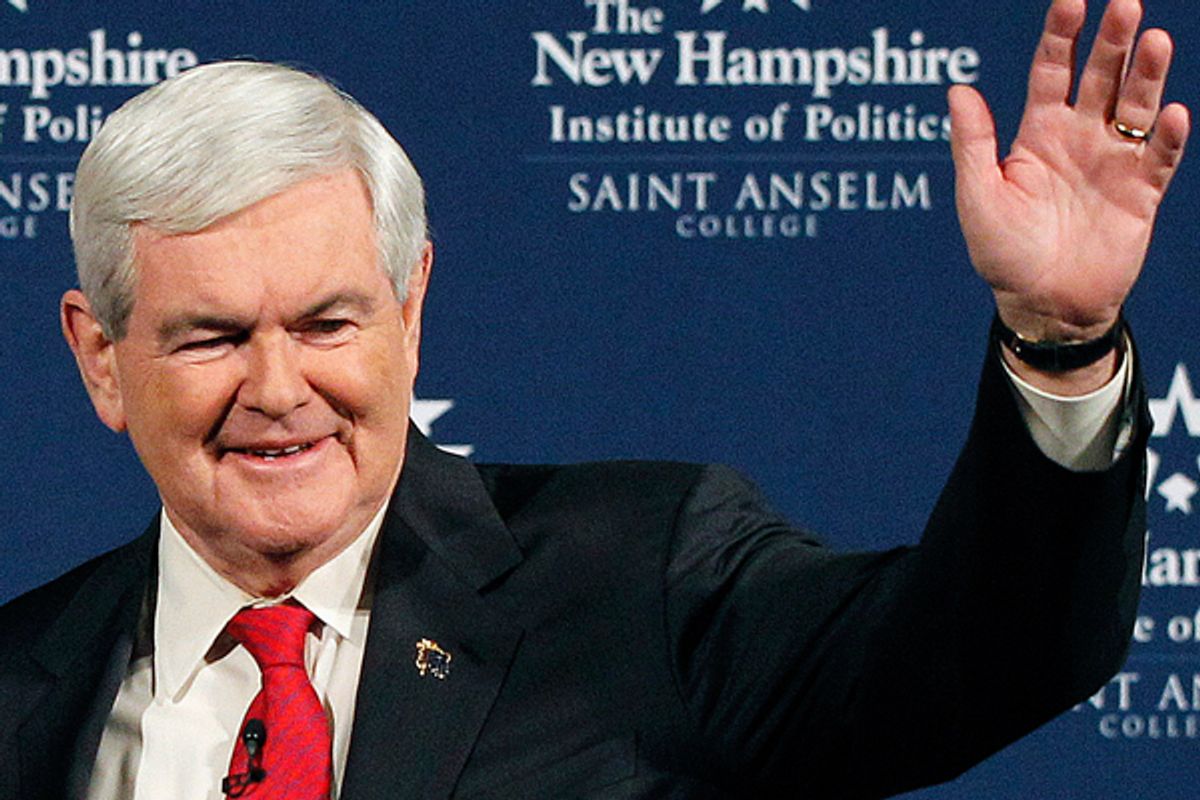 The headline from the latest NBC News/Wall Street Journal poll is that Mitt Romney performs significantly better against Barack Obama than Newt Gingrich. In a trial heat with the president, Romney trails by two points, 47 to 45 percent, while Gingrich is crushed 51 to 40 percent. Other recent polls have shown similar results, with Gingrich seemingly falling farther behind Obama as Gingrich critics raised their volume over the past week.

This seems like persuasive evidence for Romney's claim that he's the GOP's best general election bet, but as I wrote a few weeks ago, electability can be a funny issue with Republican primary voters, who tend to connect their own personal candidate preference to their sense of who's most likely to win in the fall.

The classic example of this came back in 2000, when polls showed John McCain performing far better against Al Gore than George W. Bush. In late February of that year, for instance, an ABC News/Washington Post survey had McCain beating Gore by 17 points, 56 to 39 percent, with Bush leading by just a 50-44 percent margin. Another poll for Fox News around the same time showed McCain outperforming Bush by ten points against Gore. McCain tried desperately to play this all up, telling Republicans that he was Gore's worst nightmare and that he'd beat him "like a drum." But Republican voters didn't like McCain, who was fiercely opposed by all sorts of influential party leaders, conservative activists, and media personalities. So when Bush claimed that McCain only looked so strong against Gore because "mischievous" Democrats were lying to pollsters in an effort to bait the GOP into nominating a weak candidate, Republican voters played along -- by a 62-27 percent margin they said Bush had the best chance of winning in November.

It's not surprising, then, that just as Gingrich has soared in the polls these past few weeks, so has the number of Republicans who think he's the most electable. This explains why a new Gallup poll indicates that a plurality of Republicans see Gingrich as the best choice to beat Obama, even as another recent Gallup poll showed Romney running five points better against Obama.

What this suggests is that head-on arguments about electability are not going to sway a GOP electorate that has already decided it likes one candidate more than the other. But that doesn't mean Republicans who see Gingrich as a sure loser can't bring the masses around. They just have to do it in a backhanded way, undermining Gingrich's overall image among Republicans instead of making a specific argument about electability. There are some tentative signs that this is happening. Between last week's Gallup poll and the new one, Gingrich has lost six points in the GOP race, falling from 37 to 31 percent. This comes a day after a PPP poll in Iowa showed Gingrich slipping five points there, into a virtual dead-heat with Ron Paul.

The more success that anti-Newt conservatives have in challenging his character and ideological credentials, the more Republican voters will decide he's not the most electable candidate in the race.