But the movement still has hundreds of thousands of dollars in the bank. We look at its balance sheet 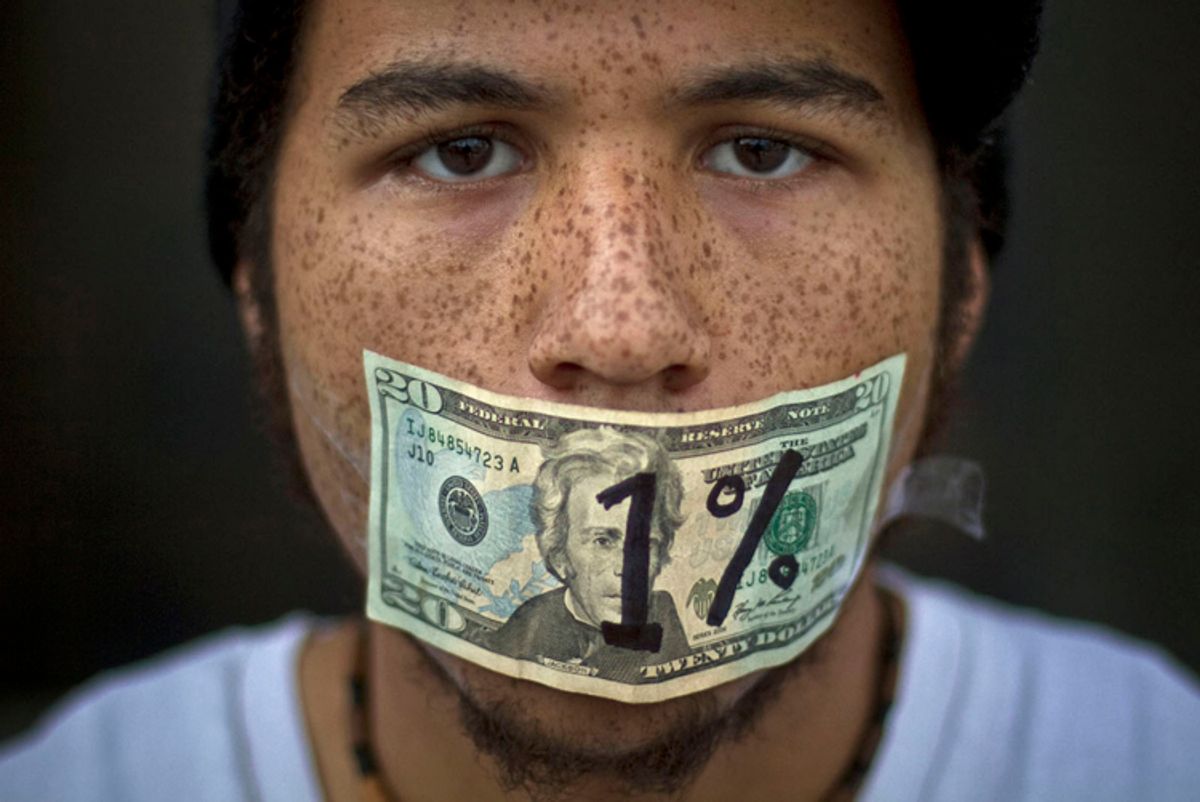 Roshan Bliss, who says he has a debt of $50,000 in school loans, attends an Occupy Denver demonstration in Denver, Colorado (Nathan Armes / Reuters)
--

Occupy Wall Street has taken in more than $665,000 in donations since it launched Sept. 17. Here's the bad news for Occupy: Donations have fallen off a cliff, from a high of around $20,000 per day to a current low of just $98 on Dec. 13. The good news: The movement still has hundreds of thousands of dollars in the bank, an impressive sum for an entity that has existed for a mere three months.

That's according to my analysis of newly available data on the finances of the movement's New York arm.

The spending data offers a glimpse into what Occupy has been up to and the direction it's going, even as the mainstream news media turns its attention elsewhere.

Here's a look at Occupy Wall Street's books, based on some quick calculations: Now a look at the expenditures.

That money has been distributed to diverse projects. $100 was granted for button making. A chunk of money has gone to bus tickets paying for trips to other occupation sites around the country.

Over $1,200 went to "tincture and salve materials" that was requested by herbalists treating people in Zuccotti Park (and approved by the general assembly in November, amid some grumbling). The minutes from that meeting are instructive for how the consensus appropriation process works. As a result, OWS is not exactly a free-spending bunch; there can be stiff resistance to spending proposals seen as wasteful.

In the following excerpt of that discussion, the Blocks are people at the general assembly who exercised their veto power against the proposal; the Responses are from the sponsor of the proposal:

BLOCK: I am opposing this on the grounds I am opposing herbal medicine in general. I’m sure it causes some benefits but it’s not much better than a placebo affect and therefore not worth the money. Can we have at least an accounting of yeas and nays, because the last vote didn’t seem very enthusiastic?

[Response]: Feelings about herbal medicine is not what is on the proposal. This is about giving money of a specific amount to a group that has already been operating here at Occupy.

BLOCK: Are there any ways you can treat someone who has an allergic reaction to any medicine?

[Response]: Yes. We have a full medical staff in our tent including RNs and doctors …

BLOCK:  I have a moral opposition that we shouldn’t be spending money that would be better spent elsewhere.

Response: My only concern is the health and wellbeing of those occupiers who have not partaken of this herbal medicine program. They have a right also to participate. In their right to participate they may expose themselves to allergies or side-effects …

Ultimately, since the people who made the "blocks" would not stand down, the general assembly moved to what's known as a "modified consensus" -- a nine-tenths majority vote. The measure passed and the herbalists got their money.

One week of expenditures gives a sense of the movement's priorities. Between Friday, Nov. 23, and Friday, Nov. 30, Occupy Wall Street spent $17,002. Keep in mind this was after the Nov. 15 clearing of Zuccotti Park by the NYPD. Nevertheless, a good chunk of the money was spent on what are essentially social services: food, laundry and  medical. (Though $1,500 of the cleaning budget was for reimbursements for the occupiers' cleaning of the park before the raid.)

Here's a chart of the spending based on my back-of-the-envelope analysis: (The data used to make that chart is here.)

The new data is available thanks to the working group formerly known as Finance. Long the subject of confusion and sometimes suspicion and resentment, the Finance working group last week changed its name to the Accounting working group in order to emphasize its administrative role. (Appropriations decisions are made by the open general assembly.)

“Money is the root of all evil; we can’t escape that here within the movement,” says Accounting group member Haywood Carey. “When you say to some people, 'Well, we’ve raised $670,000 so far,' eyes bug out. Every time something goes wrong, the money is always where people look first."

In the name of transparency, it has begun posting detailed donation and expenditure information online. Keep a close eye on these numbers to see what's happening with the movement in New York.

One other point: Since the expenditure data discussed above is partial, I've made inquiries with OWS about how much money the movement currently has in the bank. The figure was $455,000 as of Nov. 21, according to CNN. I will update this post if I hear back.

* A note on the first chart. There were two days (Oct. 5-6) when OWS's credit card processing service was offline, so we have no data for those days. Some of the data is available over a range of several days; in those cases I calculated an average and spread it out over each day in the range.